The Martians are coming… 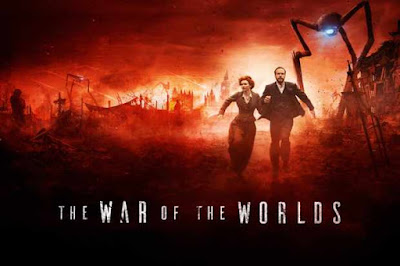 A good way to start the week ahead is a decent Sunday night of television viewing. With this in mind, BBC1’s adaptation of HG Wells’ War of the Worlds is worth watching. First published in 1898, War of the Worlds taps on the then popular belief that Mars was covered by canals built by Martians desperately trying to save their ‘dying’ planet. It was also probably the first book to take on the issue of ‘contact’ with extra-terrestrial life that inspired a tranche of ‘alien invaders’ stories in the years to come.
In this case it’s Martians in tripods blasting late Victorian London and the Home Counties with lasers; parasites intent on using the human race as food. Wells created a blueprint for future sci-fi stories including the Terry Nation’s Daleks, featuring heavily in Dr Who and 20th Century Fox’s Independence Day franchise.
Herbert George Wells was writing during the ‘belle epoque’; the bourgeois ‘golden age’ between the last years of Queen Victoria and the First World War when the British Empire seemed to be supreme. The plunder of empire brought great riches to the ruling class as well as rising class tensions at home, in an era that saw the carve-up of Africa by Britain and the other European powers as well as technological change based on continued scientific development. These events inspired Wells’ novels including The Time Machine and The Island of Dr Moreau.    This War of the Worlds adaptation is, in many ways, an analogy of European imperialist culture and the colonisation of Africa that was taking place when the book was written. Khaki-clad riflemen are ineffective against the tripods with laser-firing death rays and poison gas – like spear-throwing natives against soldiers armed with Gatling guns and a hint at horrors still to come in the 20th century.
Government ministers, used to ruling over an Empire, appear as impotent as tribal chiefs dealing with European invaders whilst the Martians’ desire to consume human beings is a possible reference to the parasitic nature of imperialism. The Martians land on 12th August – the ‘Glorious Twelfth’ which marks the start of the grouse-shooting season and is possibly a reference to the upper-class obsession with shooting at things that can’t shoot back.
This is the first attempt to present the story as a television series. It has seen two film adaptations, made in 1953 and 2005, a spoof send-up in 1996 as well as a musical, and the legendary Orson Welles radio broadcast that led some American listeners believe a Martian invasion was really taking place.
Unlike previous adaptations this television series is set in the Edwardian era, which is much closer to the original story. All three films were set in the USA, with the 1953 version containing a Cold-War anti-communist theme.
It is good to see a classic novel told in its original form, whilst benefiting from the use of CGI to show the destruction caused by the Martian imperialists. The scene showing the destruction of London resembled the Kuwaiti oil-fields after the US-led invasion of 1991.
This mini-series does seriously depart from the book, however. There’s a sub-plot concerning the marital situation of the main characters. Amy (played by Eleanor Tomlinson) and George (played by Rafe Spall) are an unmarried couple, which was considered scandalous in Wells’ day. George had previously been married to his cousin, ironically considered acceptable, who refused to grant him a divorce.
Ostracised from polite society the couple move to Woking, where news of their situation soon twitches a few curtains. This aspect of the story is a critique of the morality of the period and an argument for reform of divorce law. The implicit homosexuality of their neighbour and scientist friend Ogilvy (played by Robert Carlyle), who describes himself as a “well turned out bachelor”, is reference to the draconian treatment of Oscar Wilde who was imprisoned in 1895.
All of this has come under fire from ‘traditionalist’ TV critics, who cannot see that it is pointless simply to retell a story whose ending everybody knows and which ignores the fact that all previous adaptations have also strayed dramatically from the original. Take no notice. If you’re not already watching it catch it now on BBC iPlayer!
Posted by london communists at 3:58 AM