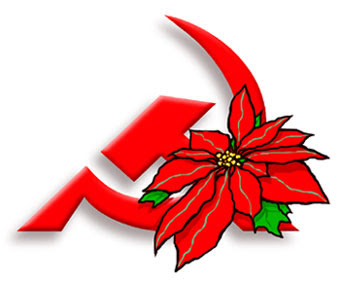 Posted by london communists at 3:42 AM

Socialism is the future!

By our European Affairs correspondent

Over a hundred comrades from 78 parties, including the New Communist Party of Britain, took part in the 13th International Meeting of communist and workers’ parties in Athens last weekend.
Representatives came from 59 countries, including delegations from the ruling parties of Cuba, DPR Korea, Laos, Vietnam and those that participate in government like the  South African Communist Party, the two Syrian communist parties, AKEL in Cyprus and the People’s Progressive Party of Guyana.
The conference was hosted by the Communist Party of Greece (KKE) whose resistance to the bourgeois offensive sparked off the mass struggle against the austerity programme throughout Europe. At the close of the three day event delegates joined the picket line in solidarity with steelworkers who’ve been out for over six weeks striking against short time and a 40 per cent cut in wages.
The communist response to the global capitalist crisis was, naturally, a major theme in the three days of debate in the Greek capital. The communist movement also looked at rise of racism and fascism in Europe, the way US-led imperialism was exploiting the upheavals in the Arab world and imperialist aggression all over the world.
In his contribution NCP leader Andy Brooks said that: ”In Britain and throughout the rest of the European Union the labour movement has two options as its economic standards decline and its political and democratic rights are eroded.
“One option for the labour movement is to remain tied to reformist ideology and continue to give its support to right-wing social democratic leadership which co-operates with and capitulates with the demands and interests of state monopoly capitalism.
“These leaderships have no commitment to socialism, no commitment to defend the welfare state and the social wage and no commitment to renationalise the industries that have been privatised. They lead no effective fight to mobilise the people against reactionary governments. They betray, and work for the defeat of workers in struggle. They refuse to countenance any action which infringes against reactionary capitalist laws. They work to strengthen Nato and US imperialism’s military and political grip over Europe and in Britain and France the social-democratic leadership remains committed to the possession and development of vast nuclear arsenals.
“The other option is to fight to defeat the right-wing class collaborators in the unions and the social democratic movements while building the revolutionary party dedicated to the struggle that can unite and mobilise the working class behind the banner of socialism. Socialism is the only alternative that can achieve the emancipation of the working class and fulfill the people’s desire for world peace, nuclear disarmament and the elimination of the causes of war”.
In the final statement the conference strongly condemned the imperialist war of Nato and the European Union against the Libyan people and the threats and interference in the internal affairs of Syria and Iran, as well as of any other country. It considered that every foreign intervention against Iran under whatever pretext attacks the interests of the Iranian workers and their struggles for democratic freedoms, social justice and social rights.
The conference declared that only socialism can create the conditions for the eradication of wars, unemployment, hunger, misery, illiteracy, the uncertainty of hundreds of millions of people, the destruction of the environment. Only socialism creates the conditions for development according to the contemporary needs of the workers.
“Working people, farmers, urban and rural workers, women, young people, we call on you to struggle together to put an end to this capitalist barbarity. There is hope, there is a prospect. The future belongs to socialism”.

Posted by london communists at 6:20 AM 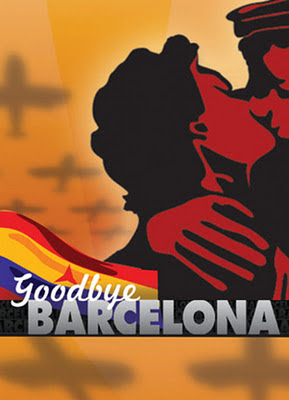 IT IS ALMOST unheard of these days on the London theatre scene to come across a committed anti-fascist musical, in which there are two renditions of The Internationale, as well as No Pasaran! and A valley in Spain called Jarama.
Even for those like myself with no great love for musicals, Goodbye Barcelona, currently showing at the Arcola Theatre in Hackney, is a stirring, visually superb and extremely well acted production. As much a play as it is a musical; there’s a good dose of humour as well.
It is remarkable that today, 75 years after the start of the Spanish Civil War, its politics are still the subject of heated debate and argument in Britain. While Goodbye Barcelona refers to many of the crucial issues – the Soviet Union’s role, the anarchists, and the despicable Anglo-French non-intervention policy – its main focus is on the experiences of three very different International Brigade volunteers.
While the political message becomes slightly confusing towards the end, ultimately the anti-fascist message is not lost.
The story begins in London’s East End in 1936 and 18-year-old Sammy’s part in the battle of Cable Street. Sammy and his single mother Rebecca are Jewish working class anti-fascists and Daily Worker readers.
Sammy responds to La Pasionaria’s appeal to defend the Spanish Republic and decides to become a volunteer. In Spain he falls in with George, an older and more experienced communist, and Jack, a bitter and cynical veteran of the Great War.
Later Rebecca, desperate to find her son, joins the brigade as a nurse, and falls in love with the wounded Spanish anarchist Ernesto, from a remote village in the grip of fascist feudal landowners.
Much of the play is taken up by this affair, and Sammy’s with Spanish girl Pilar, both of which reflect the enormous hardships and sacrifices endured during the war. But more interesting is the ongoing conflict Sammy and George have with the cynic Jack.
Jack is provocative, constantly harping on Stalin’s alleged “treachery”, and morally dubious, and Sammy and George angrily berate Jack’s lack of morals and political commitment.
The climax of the show is towards the end when Sammy, facing the prospect of defeat, becomes disillusioned and defeatist. Just before dying in battle, he tells Jack: “I’m too ashamed to go home. We’ve lost. We’ve lost everything.” But Jack reassures him, saying “You’ve told me enough times. The People!”
After Sammy’s death Rebecca receives his letter in the same defeatist tone, and says to Ernesto: “We should never have come,” to which he responds: “Don’t you say that! Don’t you dare say that! Spain will never forget what you people try to do for us. Never.”
This episode is somewhat confusing, but the message is that the sacrifices of the International Brigadiers were after all worthwhile and necessary, and that while individuals caught up in war react differently; the volunteers’ cause was heroic and just.
The play is based on a collection of interviews with Brigade veterans by Judith Johnson, with music and lyrics by K S Lewkowicz, and was directed and choreographed by Karen Rabinowitz. It received strong support from Civil War veterans, including the late Jack Jones, and the International Brigade Memorial Trust.
The press launch was attended by the Spanish ambassador and cultural attache and representatives of the Catalan government, and was widely reviewed in Spain. We recommend our readers to see Goodbye Barcelona for themselves.

Goodbye Barcelona runs at the Arcola Theatre until 23rd December (box office 0207 503 1646). Entrance on Tuesdays is pay what you can afford.

Posted by london communists at 6:49 AM

Leon Trotsky as I knew him 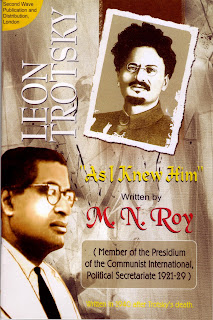 DO NOT be misled by the title or the flattering portrait on the cover into thinking that this is yet another paean of praise for Leon Trotsky. Don’t dismiss it out of hand because it was written by another one-time revolutionary who fell by the wayside. This paper is, in fact, a biting critique from someone who had been in Trotsky’s camp but ended up voting with all the others in 1927 to expel him from the Communist International.
Manabendra Nath Roy was the movement name of Narendra Nath Bhattacharya, a militant Indian nationalist who embraced Marxism and helped found the communist parties of India and Mexico and later sat on the presidium of the Comintern from 1921 until he too was expelled in 1929 for supporting the Right Opposition of Bukharin and the German communist Heinrich Brandler. M N Roy then tried to form a radical wing within the Indian Congress Party and when that failed he openly renounced Marxism in favour of what he called “radical humanism” to lead an Indian humanist society, until his death in 1954.
These days M N Roy is barely known amongst the British left and he’s been largely forgotten by the Indian communist movement he spurned so long ago. But in the 1920s M N Roy played a prominent role in the international communist movement, working in Moscow and Berlin for the Communist International, where he came to personally know most of its leading members including Lenin, Trotsky and Stalin.
This is what makes this pen sketch of Trotsky so interesting. It’s from someone who knew him and someone Trotsky considered an ally of sorts, right up to the final denunciation from the Comintern in 1927.
The discussion had gone on throughout the night. Speaker after speaker had got up to denounce Trotsky but M N Roy was prepared to give him the benefit of the doubt until:
“Having agreed that it is not possible to build Socialism in the Soviet Union in the midst of a capitalist world there are two alternatives – either we should continue doing whatever is possible by way of advancing towards the ultimate goal of Socialism, pending the success of revolution in other countries; or we should lay down power in the Soviet Union and go back to emigration to wait for the time when there will be a revolution simultaneously throughout the world. I asked whether Trotsky would choose the latter alternative.
He shouted “No”. Then I would vote for his expulsion, because he had been advocating a policy without understanding its implications or without meaning to put it into practice if he had the opportunity to do so.
Trotsky looked crestfallen. All through the night, he had heckled the speakers with challenging questions. He kept quiet while I spoke and hung his head in answer to my question. The historic vote was cast against him – unanimously. The Revolution went over the head of one of its most brilliant products”.
To find out more read the rest of the article, which written immediately after Trotsky’s assassination in 1940 and later included in Men I Met, a collection of a number of M N Roy’s biographical sketches originally published in Indian magazines.
Leon Trotsky As I Knew Him is available at £2.00 plus 60p postage from: Second Wave Publications & Distribution, BM Box 2978, London WC1N 3XX.
Posted by london communists at 5:46 AM