Oil lords of the Middle East 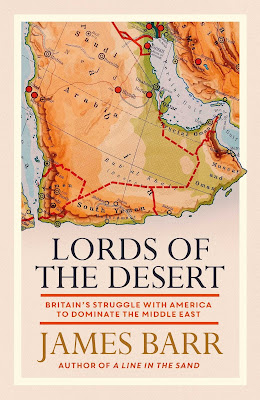 This book describes the Anglo-US rivalry in the Middle East from 1942 to 1967 that undermined the notion of the ‘special relationship’ between the two imperialist powers.
James Barr’s Lords of the Desert is divided into four parts focusing on: the formation of the state of Israel; the events in Iran in 1951; the Suez crisis of 1956; and the final part ending with the British withdrawal from South Yemen in 1967. Barr goes into considerable detail about various diplomatic meetings and those involved. He also discusses differences within the British and US ruling classes as well as between the two powers, such as the disagreements between the pro-Zionist Winston Churchill and his ‘Arabist’ Foreign Secretary Anthony Eden. Meanwhile in the USA, domestic oil companies were not keen on US development of the Saudi oil industry because this would lower the price of the ‘black gold’.
Barr sees the region’s history in terms of rivalry between imperialist powers, making little mention of popular movements in the region – Communist, Arab Nationalist and even Islamic.
Progressive movements in the Middle East were aided by that great anti-imperialist power the Soviet Union, which gets little mention. The only movement Barr mentions, in an over sympathetic way, is Zionism. Originally an instrument of the European big Jewish bourgeoisie, Zionism eventually become a tool of US imperialism. On occasion Zionism was at odds with British imperialism, which for much of the period favoured the Hashemite monarchies of Jordan and Iraq. Meanwhile US imperialism was able to trade its pro-Zionist position in the Arab world by promoting the House of Saud, which was often at odds with Britain’s Hashemite clients.
At the beginning of the period British imperialism was the dominant power in the region, holding key strategic assets such the Suez Canal and the Anglo-Iranian Oil Company, the fore-runner of British Petroleum (BP). The changing role of US imperialism was shown when these assets were threatened.
In 1951 the Iranian Government nationalised the Anglo-Iranian Oil Company; the US Government sided with Britain and orchestrated the overthrown of the Iranian government two years later. The CIA paid Islamic mobs to riot, believing their government would close down the mosques. One of the rioters was the late Ayatollah Khomeini.
The same British government believed the USA would back them in 1956, when they along with France and Israel invaded Egypt after the Nasser government nationalised the Suez Canal. The Prime Minister Anthony Eden, who was Foreign Secretary at the time of the Iranian crisis, made a serious error of judgement when the USA not only refused to support them but threatened to sell off reserves of sterling.
This was the point when US imperialism replaced Britain as the dominant power in the region. Washington’s long-term aim in the region was to ease out their British counter parts, replacing them as the dominant power in the region whilst fooling the region’s people and some governments that it was not an imperialist power.
Barr paints a rosy view of two of the region’s worst curses: imperialism and Zionism; not questioning their right to interfere, exploit and treat the Arabs with contempt. Lords of the Desert is, however, a useful source of information for anyone interested in Middle East history. He inadvertently provides anti-imperialists with ammunition by making little mention of the Soviet Union. If it was such an evil empire, why does it feature so little in a book on inter-imperialist rivalry in the region?
Posted by london communists at 2:20 PM