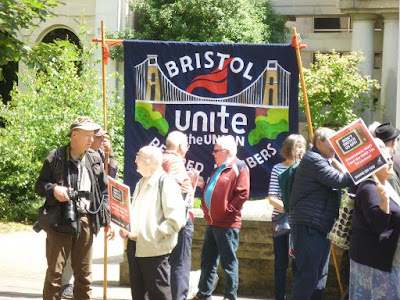 The Gloucestershire, Avon & Somerset Region of the National Pensioners Convention (NPC) held a protest in Bristol last week against the BBC’s plan to scrap the free over-75 TV licence.
The protesters were joined by members of Unite and Bristol trades council outside the BBC offices in Bristol’s Whiteladies Road. On the last protest back in February the BBC called the police in the hope of stopping the demonstration. This time the BBC offered the protestors free tea or coffee.
Back in 2015, the Government passed responsibility for the free TV licence for the over-75s to the BBC and said they would cease to fund it from 2020. The BBC has launched a consultation process, which makes it clear that they do not wish to continue the current arrangement. The consultation ended on 12th February 2019, with the BBC deciding to introduce a means-test whereby those who claim pension credit will be exempt from the TV licence charges – but 3.7 million pensioners will still have to pay the annual licence fee of £154.50 from next year.
The National Pensioners Convention is fighting this proposal to end the current arrangement and are asking for responsibility for this vital welfare benefit for over-75s to be taken back under government control. The National Pensioners Convention is absolutely clear – if we fail to protect this concession, the government will begin looking at the winter fuel allowance and the bus passes.
Posted by london communists at 3:30 AM No comments:

No War on Iran!

The greedy eyes of US imperialism are focusing again on the Islamic Republic of Iran. The Trump administration is rapidly coming under the control of the most aggressive sections of the American ruling class such as the big oil corporations that covet Iran’s oil reserves and see Iran’s militant Shia Muslim doctrines as a threat to the feudal Arab oil princes that serve their interests in the Middle East.
Many, even in the imperialist camp, are questioning the ludicrous Pentagon claim that Iran was behind the mysterious attacks on oil tankers in the Persian Gulf. The Iranians say the US or their stooges did it themselves in a ‘false flag’ operation designed to provide the pretext for a US attack on the Islamic Republic.
The Americans have provided no evidence purporting to show an Iranian patrol boat alongside one of the tankers, the Japanese Kokuka Courageous, which they claim was taken by one of their helicopters. Why the Iranians would chose to target a Japanese ship at the very moment when the prime minister of Japan was visiting Iran beggars belief.
The sinister forces that pull the strings in Washington doubtless think that the American public will believe any old rubbish these days. They used the same trick when their Syrian pawns used poison gas against their own people to demonise Assad’s popular front government last year.
We cannot influence American public opinion let along the government of the day. But we can struggle to ensure that US imperialism’s venal supporters in the British government don’t drag us into another Iraq-style war.
No war on Iran! Stop this war before it starts!
Posted by london communists at 2:26 PM No comments:

Battle of the Bores

The spectacle of Tory grandees in the TV hustings this week may boost their chances in the race to become leader of the Conservative Party and, by default, the next resident of 10 Downing Street. But whoever takes over from Mrs May is a matter of indifference to workers, who have no say in the decision-making process of the party that has been the political wing of the bourgeoisie in Britain for the last 100 years. That, however, is no longer the case.
Brexit has divided the ruling class down the middle, with those who believe British imperialism’s best interests are served by continued membership of the European Union (EU) in the Remainder camp whilst the Eurosceptics believe their future is better insured in an even closer alliance with US imperialism. This division was reflected in the close but decisive Brexit referendum result in 2016 and the split amongst the bourgeois media. But Remainers are a minority amongst Tory MPs and all the wannabee leaders are at pains to stress their Brexit credentials for the benefit of the faithful who ultimately will gift one of them the accolade when the all-members postal ballot takes place next month.
All of them, including the front-runner Boris Johnson, claim they will succeed where Mrs May failed. But all they have to offer are variations on two alternatives that have both been rejected by this fractious Parliament. There’s no majority for Mrs May’s “withdrawal plan”, which would keep Britain within the EU in all but name. Nor is there one for a “no-deal” Brexit, which was what most of us thought we voted for in the referendum in the first place.
The new Tory leader will achieve nothing apart from getting another extension of the withdrawal deadline from Brussels. The Eurocrats will play ball because it keeps us within the EU and buys more time to create the conditions for a second referendum. None of this is of any benefit to working people. There’s got to be another general election. The sooner the better.
Posted by london communists at 2:25 PM No comments: