None of us will shed a tear for the departure of Mrs May, who fell on her sword last week after failing for the umpteenth time to get support for her half-baked Brexit plan from her own Tory ranks. No-one will miss her.
When Mrs May took over from David Cameron in 2016 her followers claimed she would become another “Mrs Thatcher”. That didn’t happen. Now she has joined the ranks of past Tory politicians forced into early retirement over internal divisions within the Conservative Party over the European Union (EU).
Her withdrawal plan, which would have kept Britain in the EU in all but name, was doomed from the start as it outraged the die-hard Brexiteers in her own camp whilst failing to appease Remainers who don’t want us to leave the EU at all.
Whoever the Tories pick to succeed Theresa May as leader is a matter of complete indifference to working people. None of us will have any input into the selection process nor need we care who they choose to take her place. What we have must do is step up the demand for a general election now to ensure that whoever follows in her footsteps has only a limited time to do more harm to the working class.
Posted by london communists at 12:45 PM No comments:


The odious Alastair Campbell has at last been expelled from the Labour Party after publicly stating that he voted for the Liberal Democrats in last week’s European parliamentary elections.
Campbell was the “director of communications” during the Blair era who allegedly coined the name “New Labour”. He was accused of personally “sexing up” the “dodgy dossier” that made the case for regime change in Iraq to support American claims that were known to be false.
The loathsome Blairite denies doctoring the intelligence report – a view endorsed by the Chilcot inquiry that criticised the foreword supplied by Blair but concluded that no-one tampered with the actual intelligence dossier presented to Parliament in September 2002.
Nevertheless, Campbell was a prominent member of Tony Blair’s kitchen Cabinet and the spin-doctor for British participation in US imperialism’s invasion of Iraq in 2003 that led to the deaths of a million people. Although Campbell left Blair’s entourage in 2003 he continued to be a major player in the Blairite lobby.
In 2015 he backed the Blairite “Anyone but Corbyn” campaign during the elections for the Labour leadership and in recent years he’s focused on beating the drum for those who want us to remain within the European Union (EU). He’s the “editor at large” for the {New European}, a pro-EU weekly set up immediately after the Referendum to champion the supposed merits of the EU. He is also an adviser to the ‘People’s Vote’ campaign that spearheads the demand for a rerun to reverse the result of the 2016 referendum.
Now the Blairite gang in parliament are bleating about “intolerance” and Labour’s deputy leader, Tom Watson, is ludicrously calling for an amnesty for Campbell and all the other Labour members that he says voted for other parties in the European elections. But the fact remains that Alastair Campbell auto-excluded himself by breaching Labour Party rules that specifically forbid members from supporting other political parties and candidates.
Posted by london communists at 12:43 PM No comments: 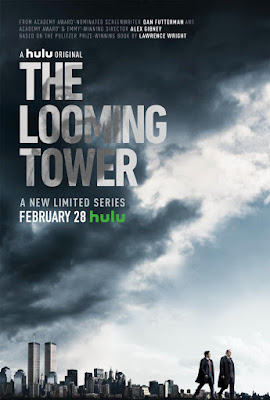 The Looming Tower (2018). Creators: Dan Futterman, Alex Gibney, Lawrence Wright. Stars: Jeff Daniels, Tahar Rahim, Wrenn Schmidt
This 10-episode mini-series shown on BBC2 covers the events leading up to the attack on the World Trade Centre on 11th September 2001. It begins with a series of bombings on US embassies in Kenya and Tanzania in 1998 and the subsequent investigation.
A common thread of the story is the rivalry between the FBI and the CIA and their different approaches to the events. The CIA viewed the attacks as a declaration of war by Al Qaeda on the USA requiring military retaliation; whilst the FBI view it as a law enforcement problem and the culprits should be brought to justice. This raises the issue of whether it is possible for a state to go to war with an organisation rather than another state.
The series paints the CIA, in particular the head of ‘Alec Station’ (the CIA counter-terrorism unit) Martin Schmidt, rather badly. Schmidt, based on former intelligence officer Michael Scheuer, withholds important information from the FBI. He and his all-female team are ridiculed by the FBI and described as “The Family” in a reference to the Charles Manson cult. He believed that only the CIA was able to deal with the problem. As it was the CIA who armed the likes of Al Qaeda in the first place perhaps, they may have had an insight into the organisation.
Differences between the FBI and the CIA do exist. The FBI is America’s national police force; whilst the CIA, although based in the USA, is a more global organisation containing agents of numerous nationalities. It has the features of the militant religious orders of old such as the Jesuits of the 16th and 17th centuries; its aim being to spread counter-revolution and undermine social progress throughout the world. It is not surprising that such an organisation would be secretive and have strange practices.
Meanwhile the FBI headed by John O’Neil are shown in a better light. An FBI agent, of Lebanese Sunni Muslim origin, points out that the attacks in East Africa were the work of Al Qaeda not the Lebanese group Hezbollah as previously thought. The agent, Ali Soufan, is sent to London to investigate the attacks. Before his departure he is told he is being sent to the place with the highest concentration of Al Qaeda operatives on the planet. It was for this reason that during the late 1990s and early 2000s London was referred to by some quarters as Londonistan.
O’Neil appears to have a complicated personal life however. He’s a polygamist with serious money problems. In one scene he is shown having his credit card declined in a restaurant; he is told by a much younger operative that agents with financial problems become targets for the other side. Ironically O’Neil later left the FBI to become Head of Security at the World Trade Centre, where he was killed in the 2001 attack.
The series has similarities with the Channel Four drama {Homeland} but differs in that it covers actual events. So far, I have made it one of my essential weekly viewings. This is not to say it will give you a full understanding of the events – for that you will have to read other articles in this paper.
Posted by london communists at 4:58 AM No comments: