Solidarity with the working people of Greece, PAME and the KKE

communist and workers parties' joint statement
For more than a year the Greek people, the workers and youth, members of the trade union front PAME and the Communist Party of Greece have said NO to the measures that the Greek government authorities are willing to impose on them. They are completely opposed to the fact that the bourgeois class in Greece, its governments, with the support of the EU, the IMF and the ECB, attack the people in order to bankrupt the people under the conditions of the crisis and increase the immense profits of the big financial and industrial capital.
The Greek people, the workers and youth, PAME and the Communist Party of Greece need all our solidarity. Their struggles can give us precious experience.
Greece itself is a rich country. However, the wealth is concentrated in even fewer hands. Indeed, unacceptable measures are taken against the working people. What happens now in Greece will be extended to all countries of the European Union.
In all of Europe the question is being raised: Who has to pay for the crisis of capitalism?
All European bourgeois parties – Social Democrats, Liberals, Christian Social, Conservative and Greens – are united in supporting their colleagues in Greece and the infamous measures of the EU bodies.
The governments and the European Commission are about to intensify the measures against the peoples: a general lowering of wages, generalisation of insecure working condition, a witch-hunt against all people receiving social welfare benefits…
Altogether this means the pillage of the world of workers by the world of capital.
In Greece, the workers, the youth, the ordinary people say NO. They are building a resistance that is exemplary for all Europe.
Solidarity with this resistance is our duty.
Everyone should know: today they attack the Greek working people, tomorrow it will be the turn of the Portuguese, the Spanish and the Italian people – and the day after tomorrow they attack all of us.
We are all Greeks!
Support the struggle against the shifting of the burdens of the crisis onto the shoulders of the working people!
Down with capitalism! For a socialist society!
Communist Party of Luxembourg (KPL)
New Communist Party of the Netherlands (NCPN)
Workers Party of Belgium (PTB/PVDA)

Pole of Communist Rebirth in France (PRCF)
Posted by london communists at 5:58 AM

From around the world

IT’S GOOD to see Revolutionary Democracy out again after a short delay with its the usual mixture of interesting articles from around the world.
The first is a piece by N Bhattacharya, which, inspite of an uninspiring title, is an excellent brief overview of India’s situation today, full of telling facts and figures but without overloading the “little grey cells”.
There are a number of articles about the “Arab Spring” from different parties and organisations, which although perhaps a little dated now, certainly widen our perspective.
The question of Libya is of course addressed and here there is a clear difference of approach (which, incidentally, has been reflected in the letters in the New Worker).
Everyone agrees that intervention of the imperialists should be denounced. But while an article from the Chilean Communist Party (Proletarian Action) points out that the Gaddafi government was at this time objectively part of the front against imperialist aggression, the International Conference of Marxist-Leninist Parties and Organisations, a forum of Hoxhaist parties, on the other hand, labels it as reactionary.
The ICMLPO seems to support the Libyan rebels as progressives pursuing “democracy” while at the same time condemning their Nato allies who also seek “democracy”.
The confusion into which the ICMLPO has fallen is not uncommon on the left and it stems from a failure to apply dialectics, a failure to see the situation in the round and apply your principles with the correct priority.
RD as usual includes fascinating Russian archive material as well as material on modern Russia. It concludes with a dose of culture in the form progressive poetry.

Posted by london communists at 2:53 PM

Neo-nazis on the web 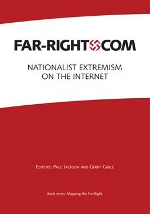 This short book is the result of recent joint work between Searchlight, the veteran anti-fascist magazine, and the Radicalism and New Media Research Group at Northampton University, headed by Dr Matthew Feldman. It began with a seminar on exploitation of the internet by neo-Nazi and racist movements that took place at Northampton University last year.
A number of leading academics took part in the discussion on Fascist Radicalism and the New Media organised by Dr Feldman’s group. This was followed up with the Think Global, Hate Local: England’s Far Right conference in April this year and the launch of a new project to look in detail at contemporary far-right extremism.
This book reflects recent research and is the first of a planned series called Mapping the Far Right. Edited by Paul Jackson of the Radicalism and New Media Research Group and Searchlight publisher Gerry Gable, it provides a detailed examination of the way the world-wide web is being exploited by fascists and racists in Britain and throughout the world.
Topics range from the British National Party and the English Defence League to the Aryan Strike Force, British People’s Party, Racial Volunteer Force and the Blood & Honour music scene.
Critical analysis by leading academic and Searchlight experts reveals how online cultures developed by such far-right movements have revolutionised extremist activity in recent years.
This volume is a collection of well-researched academic papers that provides analysis for campaigners searching for the latest thinking on far-right activity. It is not a campaigning pamphlet for sale on the street and that is reflected in the £8.50 price. But it is vital reading for all students and researchers of modern British fascism.
It can be ordered from most booksellers or post-free from: Searchlight, PO Box 1576, Ilford, IG5 OHE.
Posted by london communists at 12:00 PM No comments: