The latest edition of Revolutionary Democracy, the twice yearly journal from India has just arrived with its usual mix of interesting, sometimes controversial, political and historical articles.
The Indian material includes a piece by Badruddin Umar who shows that the Congress Party has from its earliest days been far more supportive of sectarian Hinduism than its secular reputation suggests. He blames these policies for contributing the rise of the more explicitly Hindu nationalist BJP, which is now the ruling party in India.
Another historical piece come in the form of printing of a 1951 document from the Soviet Communist Party of the Soviet Union to the Communist Party of India in which the CPSU comments on the question of an armed rising in India, a matter of dispute within the PCI. Stalin did not think the Chinese example was appropriate for India at that time. He took the view that the military success of the Chinese party was due to the common border with the USSR which allowed the Soviet Union to send essential supplies.
Ownership and access to the land is an important issue for millions of Indians. One article examines the small print of the 2013 Land Acquisition Act and finds that it severely restricts the bill’s purported good intentions.
There are two reminders of the importance of the caste system and the “tribal” minorities in contemporary India in articles on the Patidar caste and events in Manipur state. British readers will see some interesting parallels between the British government’s Trade Union Bill the BJP government’s attacks on trade union rights.
Silicosis, the incurable respiratory disease afflicting those involved in mining and quarrying is the subject of an article exposing business and government neglect of the subject.
Rafael Martinez contributes an article entitled Podemos’s Reformism and the Revival of Keynesianisn which has little on Spain’s reformist social-democratic party, but is useful for shattering illusions that widely promoted Keynesian economics offer any real alternative to neoliberalism.
Two Italian writers examine the present economic structure of Russia today, arguing that it is now “it is by now completely imperialist (though not at the top of the pyramid), where industrial capital has merged with bank capital, and where the big monopolies play a fundamental role”.
A recent Telugu translation of Moshe Lewin’s 1967 book Lenin’s Last Struggle is the occasion for an overwhelming critique of his now widespread view that Lenin and Stalin became bitter enemies towards the end of Lenin’s life.
Vijay Singh is a great admirer of the life and work of Enver Hoxha of Albania. This come through most clearly in with the opening article translated from a St Petersburg newspaper of that viewpoint which argues that the events in eastern Ukraine are largely a result of a battle between two warring imperialisms, American and Russian, for spheres of influence. While it provides useful information on the extent of Russian investment in Ukraine not everyone will be convinced about the general line of argument.
Other pieces include a contemporary view of the 1973 fascist coup in Chile from the Marxist-Leninist Party of Germany which was very critical of the Communist Party of Chile for accepting the view that a “peaceful road to socialism” was possible. An account of progress of a project to publish the complete woks of Stalin and statements from various meetings of members of the International Conference of Marxist-Leninist Parties and Organisations round off the issue.
Posted by london communists at 6:51 AM No comments: 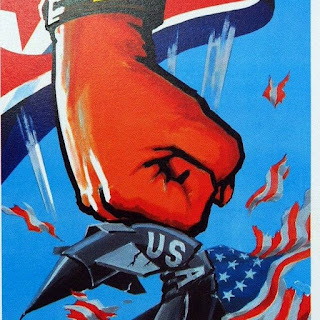 BURKINA FASO : WINNING ON THE STREETS BUT LOSING IN THE BALLOT