Inside the Far Right 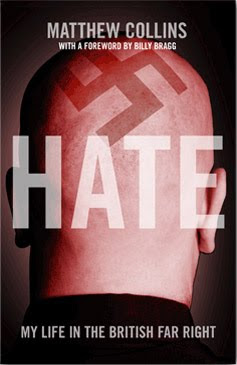 Matthew Collins: Hate, my life in the far right;With foreword by Billy Bragg
From Biteback publishers pbk, illus, 316 pp £14.99 but discounted to £13.50 if bought through www.hopenothate.org.uk and all good bookshops. All proceeds from copies bought from Hope not Hate go to the Searchlight Educational Trust

MATTHEW Collins was a teenager who grew up in south east London. He was not atypical, coming from a poor working class background, single-parent family and his father having left home when he was a small child.
He also hated the secondary school Thomas Tallis that failed to give him the education that he needed, thinking for example, that eating lemon meringue pie was a sign of sophistication. Where Matthew differed was that his anger and alienation turned into racism and lead him to join the National Front (NF) and quickly rise in their ranks.
I had wondered what had turned Matthew to the NF as I too have a lot in common with him: I also come from the same part of London and from a poor single-parent family; I also went to Thomas Tallis at the same time as Matthew and we both left school the same year (although I'm two years older) to go on and get shit jobs in the civil service.
Tallis was one of the better schools in Greenwich, despite having a high number of Trotskyite teachers and Colin Yardley, a Eurocommunist, had taken over as headmaster, and was busily ruining the school’s reputation as well.
Although it was a progressive school there was racial tension between the Afro-Caribbean gangs from Lewisham and the white gangs from the Ferrier (a large sink estate next door to Tallis) and I knew several fellow students who carried knives "for their own protection".
Despite this the vast majority of white kids were not racist, having grown up with and forged friendships with other children of several different races, most notably Afro-Caribbean's, Punjabis, Cypriots and Chinese. Matthew’s hatred stopped him from having different race friends and so learning about their culture and more importantly the things common to all of us, being poor and hard up.
Time and time again he mentions that the NF and BNP thugs who he'd go out with knew nothing about the people whom they were trying to beat the shit out of. With Thatcher doing away with national pay bargaining and constantly attacking the National Union of Teachers both Matthew and I were glad to leave Tallis behind us. A large number of teachers also left at the same time and those who stayed wished they could have left as well.
Mathew was already an NF member when he left school, as his new comrades in the far right were the only ones who would take his racist view point seriously.
He was soon being mentored by the then leader of the NF, Ian Anderson, as he was thought of as being one of their most intelligent members and a possible future leader.
Taking six months sick leave from the civil service, he was soon learning how to organise meetings, produce Nazi magazines and was soon flogging them as well as hard core porn to the right-wing faithful.
Some of Matthew’s tales of his time in the NF will be familiar with any one involved in small political parties. Problems like the battle with constantly breaking down print presses, the failure to understand modern technology, and sitting through meetings where the party hierarchy waffle on, massaging their egos, while every one else tries to stay awake. There is also the familiar backbiting and clash of egos but the right wing took this to extremes by actually thumping each other.
Matthew’s epiphany came when he organised a group of NF and BNP hooligans to gatecrash a meeting of anti-racists at Welling Library. In what became know as the battle of Welling Library he tells of how he led his Nazi horde into the meeting and started punching and kicking anyone they could lay their hands on, mostly middle-aged Asian women.
One pregnant woman had to lock herself in the toilets to avoid getting a good kicking. Having felt sick at what his comrades had done he ended up phoning Searchlight anti fascist magazine anonymously to pass on information to them.
Matthew grew increasingly disillusioned with the psychopaths, alcoholics and violent Nazi nutters of the far right. He realised that the realities of the fascists taking over in a military coup were pure fantasy born of blood-crazed, ignorant, paranoid minds who would never understand, as he had come to, that society’s problems were down to class not race.
He began to hate the far right everything they stood for, like the links they were trying to forge with other right-wing paramilitaries like the UDA and American Nazi groups. He was making more and more phone calls to Searchlight. This led him eventually to meet up with Searchlight activists and become one of their moles in the far right.
As a reward for his spying he was given book tokens and told to go educate himself. This was only partially successful as he may have used them to buy Billy Bragg CDs.
Matthew’s book is a thoughtful, candid and very personal look into the British far right. Despite the serious and often brutal nature of the book there are several laugh out loud moments, I practically liked the Eddie Whicker guide on how to post a turd through the mail.
The only possible criticism is that he may have used a bit of artistic exaggeration as according to accounts from the anti-fascists at the battle of Welling library, it was not as one-sided as Matthew’s recollection.
But that's not to take away the poignancy and relevance of the book and recent events have reminded us that the disillusioned and disenfranchised youth can turn to mob mentality and violence.
In fact this book should be on the school reading lists. But the middle class trendy pseudo-lefty teachers would probably object to the language and the violence contained in the book, totally missing the point and again that would be letting down another generation of kids, much as they did at the school Matthew and me were from.

Posted by london communists at 3:32 AM

Posted by london communists at 10:16 AM