We must dare to invent the future!

The 25th anniversary of the Burkina Faso revolution 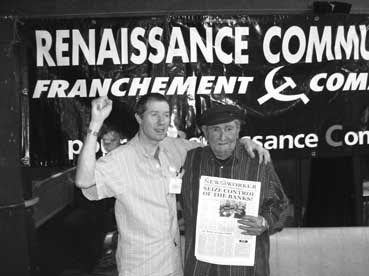 by New Worker correspondent
THE POLE de Renaissance Communiste en France (PRCF) held a highly successful conference in Paris last weekend with delegates from across France gathering in a spirit of militancy and optimism. The New Communist Party of Britain was represented by Theo Russell from the Central Committee, who joined other fraternal guests from Cuba, Greece, Algeria, Spain, the Czech Republic, Croatia, Denmark, Belgium and Pakistan for the second national conference of the French anti-revisionist communist movement.
The PRCF is still a party in process of formation with many potential members still inside the revisionist and openly right-wing Communist Party of France (PCF), and growing left-wing opposition within the PCF by factions demanding a return to class struggle.
Plans to drop the word “communist” at the PCF’s congress next month are expected to lead many more members leaving the party in the New Year, but its draft resolution has dropped its open attacks on the Soviet Union and former socialist states for the first time in decades, in an attempt to retain the waverers.
The PCF’s official membership has slumped from 800,000 to under 100,000, with most of those leaving “scattering” into isolation or non-communist activity.
The Communist Renaissance leadership declared the organisation of factory cells as the PRCF’s most urgent priority, noting that the PCF’s decision to close down its factory branches in the late 1980s created a space that was filled by Trotskyist unions.
not alone
Several delegates stressed that the PRCF alone cannot bring about revolution, and that change was only possible through mobilising the working class.
Delegates also condemned the reactionary role of the CGT union confederation – previously linked with the PCF – giving examples of manipulation, vote-rigging and even using lawyers to prevent strikes and telling workers “you have ignored our instructions and must pay the cost”.
Veteran anti-Nazi resistance leader Leon L’Andini told delegates that almost 20 years since the collapse of the Berlin Wall capitalism was in severe crisis, with the new situation presenting new dangers, such as attempts in Europe to criminalise communists and militants by re-writing history.
Georges Gasteau of PRCF’s national committee described the threat now posed by capitalism to all humanity as “capitalist exterminism”.
The PRCF opposes the EU in its entirety, including the Treaty of Rome itself, demands the return of troops from Afghanistan (a demand supported by the 70 per cent of French people), and France’s departure from Nato.
The conference adopted a position supportive of the People’s Republic of China and opposing counter-revolutionary interference, but also supporting workers and communists defending socialism and resisting corruption and the negative effects of capitalist production.
The conference was addressed by a representative of the NMPP workforce, a national newspaper distribution cooperative set up in 1947, which is under attack by French President Nicolas Sarkozy in an effort to break a symbol of past working class gains.
for a year
The workforce has fought for a year with the PRCF, the only political party in France to give its support. Sarkozy was accused of acting for allies in the media with close ties to the arms industry, and foreign interests such as the German Axel Springer group, hoping to move into the French market.
The PRCF’s second conference was a highly successful, militant and inspiring event and an opportunity for the PRCF and NCP to establish close ties which will undoubtedly grow stronger in the future.
photo:Theo Russell with a French comrade
Posted by london communists at 7:51 AM

It's a great idea but it will never work...

About 70 students squeezed into a lecture room at Varndean Sixth Form College, Brighton, last Thursday to hear Ray Jones, chair of the South-east District New Communist Party. This was part of a series of lectures organised by Roy Cullen of the Politics Department covering a broad range of viewpoints. The following is what Ray had to say.

And for revolutionary objectives at home and support for socialism in other countries such as north Korea, China, Cuba, and Vietnam.
Short term victories are possible. They are good in themselves and act as schools of struggle, but in the longer term a revolution, the overthrowing of capitalism, is necessary to right the wrongs in our society.
Posted by london communists at 2:15 PM


The scramble for the spoils of global warming has already begun with the oil giants bidding record prices for large areas of oil-bearing land and off-shore in Arctic ready for the bonanza. Canada and Russia with thousands of miles of Arctic coastline and already lining up to make sure of they get a share of the spoils
Earlier this year Royal Dutch Shell broke records with their bidding for a lease in the Chukchi Sea and the other mega-corporations are not far behind to grab a piece of the action.
Shell made bids exceeding $100 million for rights to drill a single 3-mile by 3-mile northwest Alaska for oil and gas drilling.
The Chukchi Sea is home roughly one-tenth of the world’s endangered polar bears as well as walruses and whales. Alaska’s North Slope is also home to a number of indigenous villagers who rely on the sea doe cultural and nutritional subsistence.
To make sure that the US gets all that it wants the coastguard cutter is on its way to map the floor of the Chukchi Gas as part of America’s continental shelf and their right to any oil that is found.
Fuelling the drive to the Arctic is the US Geological Survey which revealed that the area north of the Barents Sea may hold as much 90 billion barrels of oil and about 1669 trillion cubic feet of gas.
This is about 13 per cent of the world’s total reserves of oil and 30% of the total undiscovered total of gas.
America’s Arctic is on the front line of global warming. The Arctic regions are warming at a rate that is about twice as fast as the rest of the world, and climate change poses a danger to the fragile environment. For the first time in human history the North Pole can be circumnavigate.
Rising temperatures are already a threat to the remaining polar bear population which needs the ice to hunt for the seals it needs for food, the walrus, seal and penguin populations are all now in an extremely vulnerable position. .
In the Pacific there are hundreds of small islands with land that is a mere metre or two above sea level people and preparing plans to evacuate their homes before they are swept away by the rising tides. A move born of desperation.
President Remengesau of Palau, a small island in the Pacific warned: “Palau has lost at least one third of its coral reefs due to climate change related weather patterns. We also lost most of our agricultural production due to drought and extreme high
tides.
“These are not theoretical, scientific losses – they are the losses of our resources and our livelihoods…For island states, time is not running out, it has run out. And our path may very well be the window to your own future and the future of our planet.”
Posted by london communists at 4:37 AM