Posted by london communists at 3:23 AM No comments: 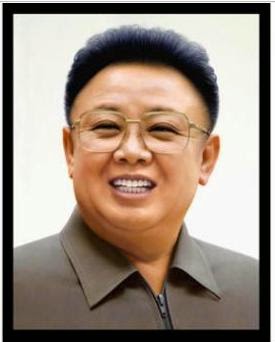 The Guardian of Socialism

COMRADE KIM Jong Il was born on 16th February 1942 at a revolutionary base in the thick forests of Mount Paekdu. His father was great leader Kim Il Sung who had started the anti-Japanese guerrilla struggle from nothing in the 1920s and his mother was the dedicated communist Kim Jong Suk, who fought side by side with the partisans in the liberation struggle.
Kim Jong Il’s early days were of hardship and struggle in the battle that ended in victory in 1945 and the liberation of Pyongyang. Five years later the country was plunged into new horrors when the US imperialists and their lackeys attempted to crush the Democratic People’s Republic of Korea and plunged the peninsula into war.
Kim Jong Il’s boyhood was spent in the thick of battle amid great national convulsions and ordeals. Like millions of Koreans of his generation Kim Jong Il dedicated his life to the Workers Party of Korea and the socialist system they were determined to build to create a better life for the Korean people.
The American imperialists and their lackeys were fought to a standstill and the guns fell silent in 1953. Kim Jong Il went to university where he developed his ideas in the political, economic and cultural fields. But like all Korean students Kim Jong Il took his turn at manual labour with the people in the fields and on the construction sites.

After graduation in 1964 Kim Jong Il worked for the Workers Party of Korea particularly in the field of literature and art. He saw that popular culture was a major key in renovating the Party’s ideological work as a whole and he wrote many articles on this theme.
Kim Jong Il devoted much time to developing the reborn DPRK film industry, particularly in the adaptions of classic plays written by his father during the anti-Japanese revolutionary struggle such as The Sea of Blood and The Fate of a Self-Defence Corps Man. Screen versions of these works won critical acclaim and not just in Asia. One film produced under the guidance of Kim Jong Il was awarded the special prize and medal at the 18th International Film Festival in Karlovy Vary, Czechoslovakia, in 1972, and it enjoyed unprecedented success in Japan.
Kim Jong Il  gave on-the-spot creative guidance to DPRK  filmmakers but he never took a direct credit although he drew on his own experience when he wrote On the Art of the Cinema in 1973 and The Cinema and Directing in 1987.


Kim Jong Il developed the Juché idea, applying it to all spheres of economic construction and for the promotion of north-south dialogue for the independent peaceful reunification of Korea. His modesty, faithful service, tireless work, total loyalty to Kim Il Sung and the Korean revolution and undoubted ability meant that when the Workers Party of Korea considered the question of the succession – and this was decided long before Kim Il Sung’s death – Kim Jong Il was the unchallenged candidate to be the successor to great leader Kim Il Sung.
Kim Jong Il made powerful contributions to the development of the Juché idea including Abuses of Socialism are Intolerable and  Socialism is a Science, published in the early 1990s, when whole sections of the international communist movement were wavering following the counter-revolutions in the Soviet Union and eastern Europe.
The Juché philosophy has rarely been properly understood in the western communist movement, which only embraced the economic ideas of Marx and Engels and ignored the philosophical content of their works. It is often simply described as “self-reliance” but it is much more than that. Juché, Korean-style socialism, takes its roots from Marx and Engels but stresses the importance of every individual and it is centred on every individual worker, who can only be truly free as part of the collective effort.
Juché opposes flunkeyism and dogmatism – the slavish adoption of models from other socialist systems and the sterile repetition of Marxist tenets. Socialism is a science for the emancipation of working people that must be applied to the concrete conditions of any particular country and it must be understood by the broad mass of the people to successfully carry out a revolutionary programme.
It is not an abstract or idealistic philosophy but an ideology that liberates the individual and the class. Kim Il Sung always stressed the need for ideological advance and material benefits for the masses – what he called the “twin towers”. When one tower advanced the other must follow. In the 1980s the DPRK made phenomenal economic advances that transformed the cities and countryside of north Korea. In the 1990s the ideological tower was advanced following the collapse of the Soviet Union.
Korean communists always welcome discussion about Juché as long it comes from people who have studied it in the first place rather than taking impressions from second hand sources or from the enemies of socialism. Juché is the essence of Kim Il Sung’s thinking – for independence for all countries, anti-imperialism, south-south co-operation, peace and socialism – policies that the DPRK put in to practice with its material support to the struggling people of Africa and Asia over the decades.
Comrade Kim Jong Il took to the helm of state as the Korean masses north, south and overseas grieved at the passing of Kim Il Sung, the veteran leader who had defeated Japanese and American imperialism and led the Workers’ Party of Korea to victory after victory in the battle to build a modern socialist democracy in north Korea.
In the midst of sorrow the people were hit by wave after wave of natural disasters. Floods and storms ravaged Democratic Korea while the American imperialists stepped up their economic and diplomatic blockade against the DPRK to again try force the Korean people to beg for terms on their knees. But Kim Jong Il made it clear from the very beginning that they could “expect no change from me,” dashing wild imperialist hopes that the Korean communist movement would waver in times of loss and hardship.
The Workers Party of Korea, with Kim Jong Il at the helm, mobilised the masses to overcome the damage caused by the natural disasters that had swept their land. The mass of the Korean people closed ranks behind the Workers Party of Korea led by Kim Jong Il, to defy US imperialism, repair the damage to the economy, smash the diplomatic blockade and develop the people’s armed forces that defend the immense gains of the Korean revolution.
Democratic Korea opened the door to talks with the south Korean regime and showed it readiness to negotiate over its own nuclear research programme and only when those talks failed, due entirely to the intransigence of US imperialism, the DPRK amazed the world by testing its own nuclear device in October 2006. What other country could have achieved so much in so short a time?
The answer lies in the fighting spirit of the Workers Party of Korea and the Jucheé philosophy, Korean-style socialism that applies the tenets of Marxism-Leninism to the concrete conditions of the Korean people and the needs of the modern world we live in.

Kim Jong Il developed the Juché idea based on the revolutionary experience of the Korean masses.

Kim Jong Il led the economic recovery in the DPRK.

Kim Jong Il led the drive for defence against the threats of US imperialism.

Kim Jong Il rallied the Korean people throughout the Korean peninsula behind the demand to end the occupation and partition of south Korea and for peaceful re-unification based on a confederal “one country – two systems” .

Kim Jong Il stood by the world communist movement and the national liberation movements of the world in their struggle against imperialism.

Kim Jong Il followed in the footsteps of Kim Il Sung and led the Workers Party of Korea to greater victories in the 21st century.

Now progressives and communists are now holding events in honour of Comrade Kim Jong Il, who died at his post on 17th December 2011. But Kim Jong Il lives on in the hearts of communists and everyone struggling for a better tomorrow and Kim Jong Il will be found at all times among the millions upon millions of Koreans advancing onwards full of confidence under the leadership of the dear respected Kim Jong Un.
Posted by london communists at 6:45 AM No comments: