The Dangerous Myth of Football 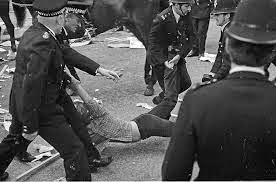 The sabbatical officers of University of Warwick Students' Union commissioned a Kevin Gately memorial painting which still hangs in the student union building. It was restored in 2004.
Tony Gilbert went on to write a book about the police riot, Only One Died: An Account of the Scarman Inquiry into the Events of 15th June 1974, in Red Lion Square, when Kevin Gately Died Opposing Racism and Fascism, published in London by Kay Beauchamp, 1975.
Posted by london communists at 4:41 AM No comments:


THE CASE that Vision Airlines itself is a CIA proprietary company was still open because two of its Boeing 737’s definitely raised suspicions: N732VA, originally N34315 and N731VA. Both were part of the “air bridges” and both had also flashed up as possible rendition flights.
The second plane started life as N368CE, another Boeing identified as a part of the extraordinary rendition programme by the “Contribution of the Rapporteur; Research on the planes use by the CIA”, prepared for the European Parliament. This published the full list of alleged rendition flights made by N368CE from 2002 to 2005 and in particular; Frankfurt to Baghdad and Kabul (both sites of notorious illegal detention centres) as well as another similar “air bridge” that operated between Frankfurt and Ashkhabad in Turkmenistan, which was serving the US Military presence there in support of the Afghan war.
The allegations were repeated in the British Parliament and in the Scottish National Party report on rendition flights passing through Scotland. In total N386CE had landed at British airports at least 18 times, according to a 2006 written answer from the Transport minister.
The New Worker view was still that the 737 would have made an unlikely rendition plane as, despite the report’s conclusions, the CIA always tended to use either Lear jets or Gulfstreams, both smaller and more discreet than the 737’s. Also there have never been any indications that the plane ever flew into Guantanamo Bay.
But many of its destinations were of real interest to us: Washington DC, Cyprus, Pakistan, Dubai, Ireland, Canada, Tunisia, Nigeria, Egypt, Bahrain, Greece, Saudi Arabia, Morocco, Turkey and Jordan as well as the regular trips to Bagdad, Kabul and Ashkhabad. All had a role in the war against terror and the rendition/torture programme.
Shannon (Eire), Gander (Canada) and Larnaca (Cyprus) are refuelling stops as well as being useful airports to arrange transfers and handovers between planes where there are governments that are sympathetic to America. Eire and Cyprus have both been highlighted by the EU parliament or the Council of Europe as rendition “‘hubs”.
But Shannon is also the home of the now world famous “Shannonwatch”, where peace and environmental activists co-operating with local plane spotters, recorded those suspected rendition flights as they stopped off in Ireland.
Some round trips clearly carried the signature of the war on terror: on 13/6/04 N368CE flew Washington DC/Shannon/Cairo then 17/6/04 Amman (Jordan)/Shannon /Gander. It’s hard not to be suspicious of that itinerary or 14/6/03 when it flew Inverness/Gander then 18/6/03 Gander/Luton/Riyadh (Saudi Arabia/Larnaca/Shannon then 19/6/03 Shannon/Gander.

In 2002 N368CE made some other interesting trips of which we only have space to list a few:


Posted by london communists at 12:21 PM No comments: