A "routine re-posting in the Republic of Korea"

AT THE BEGINNING of June, CBS news agancy reported that Brigadier-General Neil H Tolley, had been replaced as commander of Special Operations Command, Korea (SOCKOR).  Tolley, who took up his post in October 2010, had, according to an official spokesman for US Forces Korea, been moved as a result of a routine re-posting, at the end of his normal term.
Tolley was not simply some minor figure; as commander of SOCKOR he had command of US Special Forces, the UN Command Special operations component in Korea and had the role of deputy commanding general of the Combined Unconventional Warfare Task Force, based at Yongsan Army Garrison. His job title included directing the employment of US Special Forces, exercising operational control, targeting, plans and training. In reality this meant that he had control of all Special Forces in the theatre of war, including south Korea’s, which are subordinate to American control.
At the end of May Tolley made the mistake of attending the Special Forces Industry conference in Florida, a four-day junket where private suppliers and contractors get a chance to network with the military under the guise of an academic conference. Unfortunately for Tolley, when he agreed to partake with other commanders in a panel discussion at the afternoon session on the 22nd May, he may not have realised that his remarks would be noted down by reporters present as accredited observers. The session had been designed “to provide attendees with awareness of key acquisition requirements, operations and technology issues in the context of SOF’s current theatre missions”.
One American freelance defence reporter, David Axe, reporting for The Diplomat and his own blog, took a fairly detailed note of the General’s remarks and posted his article on the 28th May. Within a day he had been forced to take down the article after being subjected to a barrage of denials and accusations from the US Military.
Axe’s article quoted the General as boasting: “US special forces have been parachuting into North Korea to spy on Pyongyang’s military facilities”. He continued: “We don’t know how many we don’t know about…the entire infrastructure is hidden from our satellites”.
The General set out how the troops parachuted in “with minimal supplies in order to observe the secret facilities without being detected themselves. They use a lightweight sensor able to characterise what’s in a facility from a standoff distance. They benefit from a high frequency radio whose signal cannot be tracked back to its origins….and a wireless power transmission system”, which means the troops would not need to carry heavy batteries.
Little did Axe realise the pressure that he would be put under – but as a result of the publicity and a refusal by the conference organisers to provide a transcript when he requested it, a number of other journalists present came forward with their own notes. One set out the Generals exact words as follows: “Concealment of their entire military infrastructure is hidden from satellites and other aerial reconnaissance and that is an issue for us, so our ISR platforms are not as effective as we need them to be. So we put humans in there, without going into too much detail of our war plans, we send ROK (Republic of Korea) soldiers, Koreans, to the North and US soldiers, to do the old special reconnaissance missions. We used to do it in the 80’s in Europe. It’s roughly the same kind of thing.”
An even more unlikely source, Steve Herman of the Voice of America, contacted Axe to confirm that he had not misquoted the Generals observations and as a result, a Lieutenant Colonel Gregory from US Forces Korea, eventually admitted to Axe that the General had made the remarks as reported. A month later and the Brigadier-General is awaiting his new posting.
Posted by london communists at 5:25 PM

Kick out racism in sport! 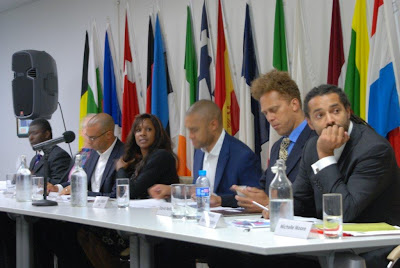