US prison labour -- a return to slavery?

Joint Statement of Communist and Workers Parties of the EU Countries

The EU Summit of Heads of States of February 11 signals a new severe attack against the working class and the peoples of Europe. The resolutions of the Summit, in accordance with the “EU 2020 Strategy” which promotes and deepens the Lisbon Strategy, intensify the anti-people policy of the European Union and the bourgeois governments by means of hard measures against the working class and the people. They seek to reinforce the profitability of the European monopolies both within the European Union and in the international imperialist competition.

The EU strategy for an exit from the crisis is based on the imposition of sweeping changes in social security systems, on the increase in retirement ages and on drastic cuts in salaries, pensions and social benefits as a whole. This attack bears the stamp of the liberal and social democratic forces which have supported the strategy of capital in cooperation with the European Union.

The deficit and public debt and the supervision of the economies of several member-states including Greece, Ireland, Portugal, Spain and other countries are used for the ideological intimidation of the working people throughout Europe.

The transnational companies and the banks made immense profits through the exploitation of the workers and from state subsidies tax reliefs, both before and during the crisis. They now compete for the lion’s share of the new lending. Once again they place the burden on workers, the poor and small and medium family farmers and the self-employed by means of scaremongering and intimidation.

The spirit of resistance is intensified among the European workers who are not ready to bear the cost of crisis for which they are not liable in the least. In Greece, Portugal and other countries, workers, civil servants and small and medium farmers are holding public demonstrations and going on strike against the austerity measures taken. The Communist and Workers Parties signatories are playing a protagonist role in this movement, being in the front line of the class struggle.

The Communist and Workers’ Parties call on the working class and peoples in each country to organize their counterattack and to condemn the parties that support the EU anti-people offensive; to strengthen the ranks of the class oriented labour movement; to reject social partnership that promotes antipeople policies, and give a strong response to the anti-people assault, demanding instead: full and stable employment with full rights for all, substantial increase in salaries, the abolition of all anti-welfare and anti-labour laws, a reduction in retirement ages and exclusively free Education, Health and Welfare. Workers can live better without capitalists; it is they who produce the wealth and therefore they should enjoy it.
=====================================================

As Norway is an associated member of the EU,
Communist Party of Norway also endorses the statement.

Posted by london communists at 6:26 AM 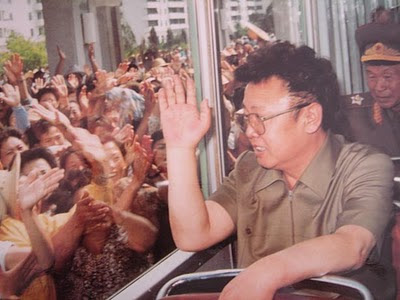 NEXT WEEK millions of Koreans will be celebrating the birthday of Kim Jong Il — the leader of Democratic People’s Republic of Korea and the Korean communist movement that liberated the country from Japanese oppression during the Second World War and beat off the combined might of Anglo-American imperialism and their lackeys during the Korean war.
Communists in Britain and comrades throughout the world will be joining them in holding events demonstrating their solidarity with the Korean revolution and the Workers’ Party of Korea that has led the Korean people, under the leadership of Kim Il Sung and Kim Jong Il to victory after victory in a struggle that began in the 1920s and continues to this day across the divided Korean peninsula.
The modern Korean communist movement was founded by Kim Il Sung and the young militants around him to fight the Japanese colonialists and build a revolutionary communist movement that would give the Korean workers and peasants a new life under socialism. Building a guerrilla army that took on the might of the Japanese Empire, Kim Il Sung mobilised the masses in a struggle that ended in victory in 1945 and the establishment of a people’s government in the north of the country.
The Workers’ Party of Korea, with Kim Il Sung at the helm, led the battle for land reform, education and socialist construction in the 1950s and 60s and then pushed forward on the engineering, technical and scientific fronts to build a modern socialist republic, where every individual worker is master of his or her own life. The DPRK stood shoulder-to-shoulder with the peoples of the Third World struggling to break the chains of colonialism and gave technical and economic aid to their new republics to defend their freedom and independence.
When Kim Il Sung passed away his successor, Kim Jong Il, told the Korean people and the world that they could “expect no change from him” and under his leadership, the Workers’ Party of Korea has won great victories in recent years. Natural disasters have been overcome. Imperialist diplomatic isolation was broken and the intrigues of US imperialism have been exposed. Democratic Korean scientists mastered the secrets of the atom to guarantee the DPRK’s defence and energy needs and now Korean rockets reach for the stars.
The tragedy of Korea is that it has been divided since the Second World War and that division is entirely due to the United States, which has propped up a servile regime in south Korea to maintain American imperialism’s military, strategic and economic dominance of north-east Asia.
A monstrous concrete wall divides Korea. Tens of thousands of American troops remain are stationed in the south, backed by a US nuclear armada that threatens the DPRK and its neighbours. The communist movement is outlawed in the south and contacts with the north are tightly controlled by the repressive regime.
The Democratic Korean government has worked tirelessly to end the partition of the country. It has called on the United States to normalise relations with the DPRK. A proposal for the re-unification of Korea based on the principle of “one country-two systems” — similar to the one that led to the peaceful return of Hong Kong and Macau to the People’s Republic of China — remains on the table.
Democratic Korea threatens no one, but the imperialist campaign to demonise and isolate the people’s government continues as a smokescreen to cover US plans to dominate the entire Pacific basin.
While we join the Korean people in their celebrations we must redouble our efforts to build solidarity with the DPRK and raise the demand for the withdrawal of all American troops from south Korea and an end to the partition of the country.
Posted by london communists at 2:40 PM

There is only one historical truth, the one written by the peoples!

The 4th European Communist Meeting education was held in Brussels on February 5th. This year the meeting engaged with the distortion of the history of the Second World War in the process of education.

The meeting was organised by the Communist Party of Greece and took place in the building of the European Parliament.

25 representatives from European communist and workers parties participated in the meeting. During the meeting the participants presented facts from school and academic books about the falsification of the Second World War history; they unveiled the goals of this campaign and referred to their experiences from the action against the ideological manipulation of the youth.

We, the undersigned parties, condemn the fierce anticommunist campaign that is under way throughout Europe. Imperialist organisations such as the EU, NATO, as well as OSCE, the Council of Europe and almost all of the European bourgeois governments have launched and escalate an anticommunist campaign of lies and slander with the strategic goal being to contaminate workers and people’s consciousness with blatant anticommunism. Their objective is to erase the unprecedented contribution of socialism in the 20th century and assert the alleged permanence of the capitalist system. In conditions of capitalist crisis anticommunism is the spearhead for the promotion of the most severe offensive against workers. This offensive by the EU, the bourgeois class and the governments that support them (liberal and social-democrat) aims to ensure maximum profitability for capital. They promote anticommunism as regards all historical events distorting the socialist and even the national democratic revolutions, the class struggle and historical development. They aim especially at young people so they may not learn the historical truth and adopt the antisocialist propaganda.

The falsification of History –and especially the history of the USSR- has but one purpose: impeding European workers and peoples just to conceive the possibility and necessity to overthrow the unbearable capitalist system and replace it by socialism.

One of the central targets of this ideological and political attack is the distortion of World War II history. An attempt is made to identify openly socialism-communism with fascism without any historical basis when it is clear that Nazism and Fascism are based on an ideology of hatred and xenophobia, while communism and socialism are based on an ideology of solidarity and social justice. The two are distinct and opposite ideologies. Particular efforts are made to distort the causes of World War II declaring the 23rd of August as a day of anticommunist remembrance. The attempt to violate historical truth continues through the conscious depreciation of the indispensable role of the USSR in the great Anti-fascist Victory and in the post-war developments. The anti-socialist propaganda and the recent events on the occasion of the 20th anniversary of the Demolition of the Berlin Wall fall into line with the same reactionary direction of falsification of the historical truth.

The historical truth cannot be erased. The contribution of socialism to the defeat of fascism, to the people’s rights, to the confidence for the future and to people’s achievements in the socialist countries is indisputable. We must also underline the impact of these achievements in favour of the working class in the capitalist countries forcing the capitalists to make concessions towards the struggle of the peoples. Despite any weaknesses and problems, the achievements of socialism are today a pipe dream for the people when capitalism cannot and is not going to solve the problems that afflict people.

We will support with all our strength the struggle to defend and highlight the historical and scientific truth at schools, institutions and universities. We demand the eradication of anti-communism from the school-books and academic teaching. It is necessary that the young generations should be taught and learn the historical truth about World War II, the laws of nature and human society. In particular, they should learn Darwin’s theory of evolution and the Marxist theory of class structure, class struggle and of the analysis of capitalism as an economical system. The role of Communist and Workers’ Parties as well as of the Communist Youth Organizations in this issue is vital as regards the work in wide masses, in particular of young workers and students. To this effort may contribute not only the enlightening but also the scientific work of scientists, educators, academic and social personalities. The working class and the poor popular strata can fight for a society without exploitation, for socialism.

We strongly condemn the persecution and banning of Communist Parties and Communist Youth Organizations; we express our full solidarity with all the victims of anticommunist attacks and of the witch hunt. It becomes evident what the “democracy” of the EU, capital and the multinationals means. It has class content, is democracy for the few and exploitation and oppression for the many.