Fun and Games in Brighton

The spirit of Labour Party Conference returned to Brighton this week. The good old days of open debate and factional back-stabbing may not have totally returned but the sterile bureaucratic agenda that made Conference a meaningless charade in the days of Blair and Brown has gone, hopefully for good this time.
Labour Conference has never been the sovereign body of the Party and its decisions can be, and have been, regularly ignored or side-lined by Labour Governments and the Parliamentary Labour Party, which, until recently, was a rule unto itself. Nevertheless Conference endorsed calls for the repeal of the anti-union laws, the restoration of some but not all of the old public section, the raising of the national minimum wage and the introduction of a four-day week within ten years.
Whether these pledges, along with support for climate change action and a ban on fracking, eventually get on to Labour’s election manifesto ultimately depends on the balance of forces within the labour movement as a whole.
Most Labour MPs are Blairites or relics of the old Labour right-wing platform that has dominated Labour Party thinking since its foundation in 1900. These bogus “social-democrats” always sought to serve what they believed was the dominant trend within the ruling class. They were “Atlanticists” who backed NATO and parroted anti-communist bourgeois propaganda  to justify support for Anglo-American imperialism during the Cold War. They were the people who witch-hunted communists and other militant union activists and preached class-collaboration in one form or another to justify their treachery. And they could always rely on the solid support of the trade unions to back up their claims to represent working people. Thankfully these “moderates” have little or no support in the unions today.

Gone are the mealy-mouthed words about an “ethical foreign policy” that were trotted out in the early days of the Blair era.
Now delegates have called on an incoming Labour government to “adhere to an ethical foreign policy” on trade with Israel, including ending any trade in arms used to violate Palestinians’ human rights, the motion passed on Monday states.
In the past Labour was a staunch supporter of Zionism and the State of Israel. Now the Zionists are on the defensive. Zionist moves to drive Palestinian supporters out of the Labour Party have succeeded in hounding out some well-known activists including Ken Livingstone and Jackie Walker. But their attempt to derail growing support for the Boycott,  Divestment, Sanctions (BDS) movement that works to end international support for Israel's oppression of Palestinians has stalled. And support for the Palestinians is growing.
In Brighton this year delegates voted overwhelmingly to recognise the right of Palestinian refugees to return to their homeland and oppose any proposed “solution” for Palestinians not based on international law, including their right “to return to their homes”.
It also reaffirms the party’s relatively new commitment to end all arms sales to Israel.
The Palestine Solidarity Campaign supported the motion that commits Labour to ending Britain’s financial and military complicity with Israel’s oppression.
“Labour Party members have said in one voice to the Palestinian people – we stand with you in your fight for justice,” PSC director Ben Jamal stated. “What is required now is for this crucial motion, passed overwhelmingly by members, to be translated into official party policy as we move towards the next general election”.
Posted by london communists at 12:37 PM No comments: 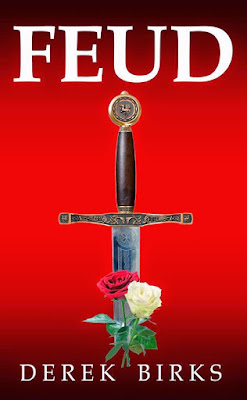 I picked up this novel, first published in 2015, at the Chalke Valley History Festival in July this year. For those unaware of this event, the festival is a kind of right-wing Tolpuddle; this year’s star attraction was Jacob Rees Mogg.
The author Derek Birks is a retired history teacher with an interest the late medieval period.  Feud, the first book in his Rebels and Traitors Trilogy is set during the Wars of the Roses (1455 – 1487).
The conflict was a feud between two branches of the Plantagenet family – the Houses of York and Lancaster each represented by a rose, white and red respectively. The novel features a parallel rivalry between two Yorkshire families, the Elders and the Radcliffes; each aligned to one of the main royal houses. The hero of the story is Ned Elder a nice feudal lord who has his lands taken from him by the nastier Edmond Radcliffe.
This is very much the Sir Walter Scott model of historical novel in which there are good and bad kings and barons – a notion that lies at the heart of his famous novel Ivanhoe, in which England’s problems are resolved when Richard the Lion Heart returns from the Crusades.
Like Scott’s romances, this story is historically inaccurate and un-Marxist. It is not Marxist historical fiction; the best examples of which are the works Geoffrey Trease (1909-1998).
The author does occasionally pose the question of why so many of the lower orders followed their baronial masters so loyally.  According to Birks this was out of genuine loyalty.  In the story a young peasant boy addresses an associate of the now dispossessed Elder family as my lady, even though she actually has no more wealth than he does. The boy essentially wants to hold an inferior social position and knows no other place.  We all knew our place back then – shame the Middle Ages came to an end.
Although Marxists view history very differently, the brutal way in which the Peasants’ Revolt was suppressed, just under a century before, may have put the lower orders in their place.  The fact that the English nobility were able to recklessly fight each other to the death indicates little fear of lower orders.
The masses feature little more than extras during the Middle Ages and the Wars of the Roses in particular; it is subsequently an ideal period of interest for the conservative historical novelist. The same cannot be said of the sixteen and seventeenth centuries with the Reformation and the English Civil War.
Meanwhile Feud contains a degree of historical intrigue around Margaret of Anjou, wife Henry VI.  It contains easy to follow and convincing fight scenes, killer nuns, romances, Flemish mercenaries, and loyal retainers.  As a result, it is readable and Birks has carried out plenty of research. As someone wishing to embark on a second career as a historical writer, I wish him the best of luck.
Posted by london communists at 8:35 AM No comments:

What they stand for

Last week’s Liberal Democrat conference in Bournemouth have provided their new leader Jo Swinson with another platform to trawl her vacuous views in front of the dissident Tories who they hope to win over in time for the next general election.
In the old days the Liberals posed as a radical alternative to Labour. Their youth wing embraced the Palestinian cause and campaigned against the racist, apartheid South African regime while championing early calls for devolution in Scotland and Wales. But those days are long gone.
Nowadays the Liberal-Democrats are just a refuge for third-rate Blairite MPs looking for a new platform to prolong their political careers and a handful of Tory Remainers who jumped before being dumped by Boris Johnson.  Chuka Umunna, an ambitious Labour turn-coat who joined them in February now claims that Jeremy Corbyn is “acting as an apologist for a hard-right  Russian government that thinks it can poison people on British soil, lauding authoritarian regimes in Venezuela and Iran, failing to support the proscription of Hezbollah as a terrorist organisation”. Others repeat Zionist smears about “anti-semitism” in the Labour Party while saying little or nothing about their dismal record in support of austerity as a junior partner in David Cameron’s coalition government.
The growth of the Scottish and Welsh nationalist parties has largely made the Liberal-Democrat take on devolution irrelevant while their self-serving demand for proportional representation has little appeal to the millions trying to live on bread-line wages or the miserable hand-outs of the benefits regime.
In Bournemouth Ms Swinson dumped their old demand for a “People’s Vote” and replaced it with a blatant call to revoke the withdrawal procedure and simply ignore the 2016 referendum.
These are the people that talk about a “fair, free and open society” while brushing aside the 17.4 million people who voted to Leave the European Union in 2016.These are the people who will be calling on Labour supporters to “tactically vote” in their favour at the next election. There’s nothing “liberal” about the Liberal-Democrats.
Posted by london communists at 3:43 AM No comments: