Spotlight on the US State Department

With thanks to Sourcewatch and Spinwatch.

Posted by london communists at 10:59 AM

Unity, the magazine of Unite Against Fascism 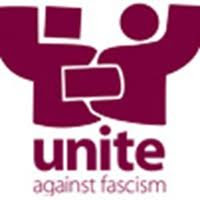 THE FIRST edition of Unity, the quarterly magazine of Unite Against Fascism has at last appeared, giving us now three major anti-fascist and anti-racist journals in this country, the other two being the monthly Searchlight and the bi-monthly Hope not Hate.
Unity is £3 for 32 pages and its first edition, Spring 2012, is focussed on the local elections that happened in May.
The cover picture depicts Doreen Lawrence, mother of Stephen Lawrence, the black teenager who was murdered by racists in 1991 and leads to a story on page four by UAF joint general secretary Weyman Bennett entitled “The murder that exposed racism in the justice system”.
There are campaigning articles on the elections and the launch of “Griffin must go”, a report of the UAF national conference in London, an article on the history of the UAF and its predecessor, the Anti-Nazi League.
There is a very good article on Paul Robeson, and articles on combating homophobia, fighting the extreme right wing in Catalonia and on fighting racism in football. There is a contribution from Love Music Hate Racism.
And there is an introduction by Christine Blower, the general secretary of the National Union of Teachers.
There are plenty of full colour photos, graphics and advertisements for UAF merchandise.
But none of the articles is very long – around 500 words is the maximum with most at about 300. So all topics are covered rather superficially.
It is a great magazine for handing out in large numbers to young people who are not yet involved in anti-fascist activity. For anyone who is already involved it will not tell them anything they do not already know.
In that sense it is complementary to Searchlight which covers issues and give analyses in much greater depth and supplies up to date information and intelligence on the fascist and racist organisations. The two journals are not in competition; they aim at different readerships.
Unity can be obtained from the UAF national office at PO Box 36871, London WC1X 9X, phone 020 7801 2782 and email: info@uaf.org.uk

Posted by london communists at 3:26 PM No comments:

Joint statement in solidarity with the Communist Party of Greece

This e-mail address is being protected from spambots. You need JavaScript enabled to view it


Message of solidarity with the KKE
The parties signing this statement believe that the struggle which is being waged by the Communist Party of Greece (KKE) is of extreme importance to all the peoples of Europe and the world, and for all the Communist Parties. This consistent struggle of the Greek communists against the EU and NATO, and their militant action aimed at making the capitalists, and not the working people, pay for the crisis, play a key role in the process of raising of the consciousness of the peoples of Europe and also worldwide. The bourgeoisie is disturbed because the KKE is not participating in the bourgeois governments, because it does not compromise with governments that, under conditions of capitalist crisis, will only serve to give a respite to the capitalist system so it can save time and maintain its barbarism against the people. The KKE has not been submitted, nor will be, to the interests of the bourgeoisie and that is why they are trying to create difficulties to the KKE in face of the June 17 elections. We are confident that the Greek working people will thwart this plan. Our parties, each in our own country, we promote a movement of solidarity with the struggle of the Greek working people and the KKE. The struggle of the KKE is also our struggle. The struggle of the working people, the self-employed, small and medium farmers and youth in Greece are also the struggle of our peoples, a struggle that, through the social and popular alliance, is not aimed at the salvation and perpetuation of capitalist barbarism, as is done from the reformist positions, but to overthrow the power of capital and building a society without exploitation, for the construction of socialism.
---------------------------------------

Pole of the Communist Renaissance of France (PRCF)

Communist Party of the Philippines (PKP-1930)

Communist Party of the People's of Spain

Communist Party of the Russian Federation

Posted by london communists at 12:24 AM

Pages from the past


THE CHARTIST movement was the first mass movement driven by the working class. It grew following the failure of the 1832 Reform Act to extend the vote beyond those owning property. In 1838 a People's Charter was drawn up for the London Working Men's Association (LWMA). The Charter had six demands: universal male suffrage, elections by secret ballot, abolition of property qualifications for MPs, payment of MPs, equal electoral constituencies and annual parliaments.
Millions signed Chartist petitions which were repeatedly rejected by Parliament. Chartist leaders were arrested, jailed or transported to Australia and the movement eventually was wound down in 1858. But the demand for reform continued and by 1918 every one of the Chartist demands apart from annual parliaments had been achieved.
Past Pixels was set up in 2009 to make images of working class struggle more widely available to a newer generation and over the years it has carved a niche for itself with a series of greeting cards dedicated to the working class movement

A new set of cards of images of leading Chartists, taken from original photographs, engravings and lithographs, has now been produced to commemorate their struggle for social justice.
Dorothy Thompson, the immensely influential Chartist historian, helped Past Pixels select the images for reproduction. She identified Feargus O’Connor, William Cuffay, James “Bronterre” O’Brien and John Frost as her favourite five Chartists. Sadly she died in early 2011 and this set is published in her memory.
There’s a short commentary about the image of the back of each card and Past Pixel cards can be ordered online at http://www.pastpixels.co.uk or from an increasing number of retail outlets. Further information about all the cards can also be obtained  by writing directly to: Past Pixels, PO Box 798, Worcester, WR4 4BW