No Deal Trump not welcome here 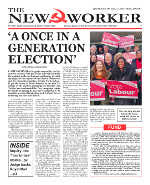 Donald Trump’s minions tell the world that their boss is a great negotiator. Trump says in a book that he probably didn’t write that: “Deals are my art form. Other people paint beautifully on canvas or write wonderful poetry. I like making deals, preferably big deals.” But what has he actually achieved?
Absolutely nothing. Trump said he was going to make the Mexicans pay for the wall he’s building to keep out illegal immigrants. Well they didn’t.
He unilaterally pulled out of the international nuclear deal with Iran and stepped up sanctions in a bid to force the Iranians to renegotiate on American terms. That didn’t happen.
Despite three meetings with Democratic Korean leader Kim Jong Un on the nuclear issue, Trump’s put nothing concrete on the table and the whole process has stalled. So that’s been a waste of time.
Trump hiked up tariffs to force the Chinese to agree to a one-sided trade deal with US imperialism. All that’s done has been to spark off a trade war that could plunge the global economy into another recession.
And the worthless “Deal of the Century” that Trump’s men thought could bring peace to the Middle East by giving Israel all that it wanted and giving the Palestinians nothing in return died before it even got off the ground.
Whilst his Democrat rivals claim a moral high-ground they simply do not possess, Trump is no saint either.
The Democrats like to portray Trump as a vulgar, corrupt racist unfit to hold public office. But he is so much more than that. The property tycoon turned president represents those who no longer want to pay for wars they cannot win – which has been virtually all of them since the Second World War. They too want US hegemony over the world but they believe it can be won through trade wars and unequal treaties, which was the preferred form of US overseas expansion in the 19th century. This is what Trump means when he says he wants to “Make America Great Again”.
The US president wants to cut his losses in conflicts he did not initiate in Afghanistan and Syria. He doesn’t believe in ‘globalisation’ or the ‘new world order’ of past Democrat and Republican administrations that tried to use US might to establish American hegemony throughout the world.
Trump represents the American capitalists who want to cut back US military expenditure in Europe, Afghanistan and south Korea so that they can concentrate on controlling the global energy market by taking over the entire Middle East and restoring US imperialism’s control over south America.
Trump’s coming to London again in early December for a NATO summit. He wasn’t welcome the last time he came. He isn’t welcome now. It isn’t just because he’s a moronic climate-change denier with sexist, chauvinist and bigoted anti-immigrant views. It’s because he is the Supreme Commander of the most oppressive country in the world.
No US president should be welcomed here until US imperialism ends its occupation of south Korea and closes its ring of bases that target Russia and People’s China. No US president should be welcomed in Britain until the USA ends its support of the fascist regime in Kiev and the Saudi intervention in Yemen, pulls out of Syria and Iraq, and drops sanctions against Cuba, Iran, Venezuela and Democratic Korea. No leader of US imperialism should be fêted in Britain until America ends its support for Zionist Israel and recognises the legitimate rights of the Palestinian people.
Posted by london communists at 1:45 AM