The Crucible – a new look at a Miller classic 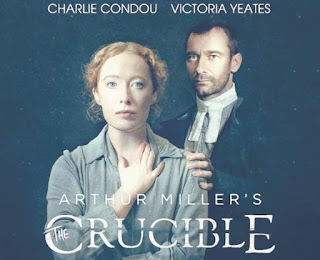 By Andy Brooks
Back in the 17th century a wave of hysteria swept a small town in what was then the English colony of Massachusetts in New England. Based on the accusations of children, the largely Puritan settlers of Salem started an enquiry that turned into a frenzied witch-hunt that was used to settle old scores between rival factions in the town. Twenty people, 14 of them women, were executed and five others, including two infants, died in prison before the whole process was halted by broader public opinion.
Salem became such a by-word for superstition, bigotry and persecution that it inspired Arthur Miller to write this play during the notorious anti-communist “witch-hunts” of the early 1950s led by Senator Joseph McCarthy and the notorious House of Un-American Activities Committee.
The Crucible is a dramatic interpretation of the Salem witch trials of 1692 but it is clearly an analogy of McCarthyism, which hounded communists, and those whom the rabid Senator deemed to be ‘fellow-travellers’, out of their jobs. Those that refused to become turncoat informers were often forced to go into voluntary exile. Some were even jailed on trumped charges of conspiracy, subversion or being agents of the Soviet Union.
Miller himself said that the Crucible was “by far my most frequently produced play, both abroad and at home. Its meaning is somewhat different in different places and moments. I can almost tell what the political situation in a country is when the play is suddenly a hit there – it is either a warning of tyranny on the way or a reminder of tyranny just past.”
The current production by the Sell A Door Theatre Company and the Queen’s Theatre Hornchurch began in February at the Queen’s Theatre in Hornchurch, another part of Essex now in Greater London, and will now tour the country.
It stars Charlie Condou, best known for playing Marcus Dent in Coronation Street, as the witch-hunting Reverend Hale, and Victoria Yeates of BBC’s Call the Midwife fame. It is directed by the Queen’s Theatre’s Artistic Director, Douglas Rintoul.
It’s currently on in Dartford and moves to Cheltenham next week. Check out the full details of the Crucible UK Tour on the web to see if it’s coming anywhere near you. It’s well worth a visit.
Posted by london communists at 4:23 AM No comments: 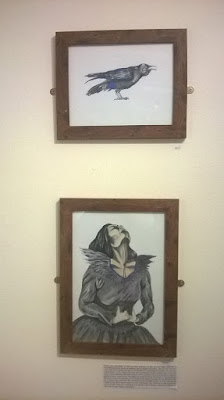 Valence House in Dagenham may seem to some an unlikely venue for an exhibition about the occult arts – but the Bruja exhibition, the word is simply the Spanish for witch, has considerable interest in the London borough that was once part of south Essex.
This modest display of sketches, paintings and ‘magic’ paraphernalia by Alisha Ward is tucked away in one of the rooms of this historic moated manor house, which goes back to the 13th century. It now contains permanent exhibitions on history and life in Barking and Dagenham, including displays from the old London County Council’s massive Becontree Estate.
Alisha Ward is an artist, illustrator and art student from London. She says that her work traditionally “takes the basis of the female form, using this as a catalyst for ideas which revolve around mental illness and the human condition, and takes a narrative form incorporating mythology, folklore, gothic, literature and pop culture references.”
In this exhibition in the Whalebone Gallery, Alisha combines the iconography of magic with her interest in folklore, film and the spooky side of life to create a narrative of the landscape of human experience.
It’s well worth a visit if you’re in the area and the rest of the museum is packed with interesting displays that reflect life in the borough from the Stone Age onwards, as well as a gallery dedicated to the social impact that the building of a massive council estate in the 1920s and the subsequent arrival of the Ford Motor Company had on what had been a rural village on the outskirts of London. There’s a ‘cinema’ that shows newsreels about Dagenham on a continuous reel and a very good café at the nearby visitors centre.
Valence House is not the easiest to find if you don’t know your way around the estate, so take a map with you. The nearest stations are Chadwell Heath and Dagenham Heathway, but they are both a 20 minute walk away from the park. Admission is free and the museum is open Tuesday to Saturday from 10:00 to 16:00; and the exhibition runs until 6th May. Admission is free at:
Valence House Museum
Becontree Avenue
Dagenham RM8 3HT
Phone: 020 8227 5293 or 2034
Posted by london communists at 4:16 AM No comments: