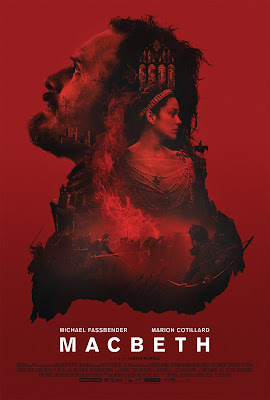 THIS IS a very powerful film which definitely benefits from being seen on the big screen. It is shot in chiaroscuro through the ever changing rain and mist against a backdrop of the glorious Scottish landscape, in which characters emerge from the mist, say their piece, do their deeds and then merge back into the mist.
The Bard’s original play has been edited a bit but all the important scenes are there, showing the familiar story of a good man, nudged by prophesy from the three witches, into ambition and an opportune murder that will set him on the throne and on the road to hell.
Once he has committed the crime he must cover up by committing more and more shocking murders until he has become a paranoid tyrant.
The play opens with the “Battle of Ellon”, close to Cruden Bay where in a real battle in the 11th century the Scots under their King Malcolm II (father of the King Duncan in the play) defeated an attempted Norwegian Viking invasion led by young Canute, later to become King of England.
A couple of scenes are changed from the original – the murder of Lady MacDuff and her children, as revenge for MacDuff’s defection to the camp of Malcolm, son of the murdered King Duncan, is not in her castle at Firth. Instead Macbeth has them captured and brought to be burnt at his castle at Dunsinane. This is a scene that drives Lady Macbeth insane with horror and guilt.
And in the final battle where Birnam Wood “comes to Dunsinane” it is not carried as branches for camouflage but set on fire and comes as fire, red smoke and a cloud of ash so that the final battle between Macbeth and MacDuff happens in a fiery red haze.
Throughout the film there are bystanders standing still, wrapped in long black cloaks against the wind and rain – impossible to distinguish man from woman – like a Greek chorus, witnessing everything.
The three witches are also dressed in long black cloaks pulled tightly about them. There is no Hecate but there is a girl of about eight-years-old with them. They appear from the mist, say their piece and disappear back into the mist.
In the final scene, after Macbeth is killed by MacDuff, Fleance, a young boy and son of the murdered Banquo, appears and picks up Macbeth’s sword – hinting that one day he will be king and be the founder of a long line of kings – including James I of England and VI of Scotland – for whose benefit Shakespeare wrote the play.
The three witches then appear, take a good look, turn and walk away with an air of “job done”.

Posted by london communists at 5:11 AM No comments:

IN JUST three weeks Russia’s war on terror has dealt devastating blows against the reactionary militias that were financed and armed by US imperialism, Turkey and the feudal kings of Arabia. While Russian jets pound terrorist positions the Syrian army has launched an offensive on all fronts against the brutal ISIS and the Muslim Brotherhood gunmen who have spread death and destruction throughout the country over the past four years. Well over 1,000 have laid down their arms in return for an amnesty. Thousands more have fled back across the Turkish border.
This week Russian president Vladimir Putin and Syrian president Bashar al Assad met in the Kremlin to discuss the current situation and future action. Putin said that the Syrian people have been confronting terrorists “practically single-handedly” for years, withstanding considerable casualties but now they have achieved serious and positive results in this fight.
Assad thanked the Russians for their help stressing that political steps will follow military action. “The only aim for all of us should be what the Syrian people want as a future for their country.” Once the terrorists are defeated, it will take a united effort to rebuild the country economically and politically and to ensure peaceful coexistence for all, Assad concluded.
When Russia acted on the Syrian request for air-support we were swamped by the demands of the war-mongers and their media lackeys on both sides of the Atlantic for a robust Nato response to halt the Russian intervention — on the grounds that only Nato has the right to bomb Syrian terrorists, which in imperialist terms means only gunmen who don’t do the bidding of Washington and the oil princes. This was echoed by the “human rights” gang, who said little about four years of terrorist atrocities in Syria, but soon began bleating on about “civilian” victims of Russian air-raids and the fear of a direct Russian-American confrontation over the skies of Syria that could trigger a much wider conflict.
These days the imperialist media no longer possess the monopoly of information they once had. Russian, Middle Eastern and independent news reports can be watched and read by a switch of a TV channel or the click of a computer keyboard. People are now not so easily fooled by the lies of the imperialist media and public opinion in Britain and the United States is broadly behind the Russian intervention.
This has clearly been heeded in the United States. This week, the Americans signed an agreement with Russia regulating the operations of the two countries’ air forces in Syria. The deal is aimed at preventing incidents and providing for the smooth operation of the two nations’ aircraft, and for mutual aid in critical situations.
But clearly not in Britain. The Cameron government is openly considering sending the RAF into the fray to join the US-led operation in Syria, shamefully supported by a handful of Blairites in the Parliamentary Labour Party who hope to embarrass Labour’s leader, Jeremy Corbyn, with their treachery.
US imperialism is using every dirty trick in the book to bring down the Baathist-led popular front government in Syria which is the last Arab bastion of resistance to the American plan for total control over the Middle East and the immense oil reserves that lie beneath its sands. They’ve been thwarted but they haven’t given up.
The real purpose of the Nato-led operations over Syria is simply to prevent the Syrian Arab Airforce from attacking major rebel positions and to pave the way for the “no fly-zones” and “safe-havens” that the imperialists love to use as a pretence for open invasion and “regime change”.
The labour and peace movement must stand by Syria to make sure that Britain plays no part in it.

New Worker editorial
24th October 2015
Posted by london communists at 4:07 AM No comments:

Democratic Korea in the struggle for freedom and independence


The DPRK capital Pyongyang became a venue for non-aligned meetings and summits and Kim Il Sung promoted bilateral and multilateral relations with the non-aligned countries. Kim Il Sung stressed the necessity of making the whole world independent and achieving unity within the ranks of the anti-imperialist forces on a global scale. This lead to the DPRK concluding 11 treaties with non-aligned countries such as The Central African Republic, Mozambique, Guinea-Bissau, Guinea, Zimbabwe, Togo, Angola, Libya, Ethiopia and Democratic Yemen between 1978 and 1984.
The DPRK also has had a proud tradition of promoting international cooperation throughout the decades. The DPRK has helped to train agro-technicians from many developing countries. Korean technical staff have worked in a number of African and Asian countries at a low cost to their host nation. At Kim Il Sung’s recommendation agricultural centres were set up in Tanzania and Guinea for Korean and African agro-scientists to conduct joint research projects.
The WPK’s Juché based foreign policy has meant that the DPRK is a country fully independent from the dictates of the trans-national corporations, the IMF and the World Bank. The DPRK is a model of total independence which is attracting the attention and aspirations of the developing world. Songun Politics proves to those who are fighting imperialism and colonialism that is possible to resist and win in the struggle for independence. The work of the DPRK in promoting anti-imperialist unity has provided a guide to those parties and movements, countries and peoples seeking their genuine national and social liberation from neo-colonialism and globalism.
Posted by london communists at 4:04 AM No comments:

RUSSIA’S timely intervention in Syria in support of the Syrian government’s efforts to defeat the “Islamic State” (ISIS) and the other reactionary militias that have spread death and destruction throughout the country has won the support of the Arab street and all progressive humanity. People’s China supports the Russian role in Syria and the presence of Chinese warships off the Syrian coast is fuelling Arab speculation that Beijing may soon go beyond moral support to help a friend in need.
In a few days Russian air-raids, backed by missile attacks from the Russian navy, have crippled ISIS and the other terror gangs — something the Nato powers have failed to achieve in over a year of desultory bombing of ISIS positions in Syria and Iraq. No wonder the Syrian Kurds are now calling for Russian air support and arms supplies and that the Baghdad government is thinking of asking the Russians to extend their air campaign to target ISIS positions in Iraq.
A few weeks ago the imperialists were shedding crocodile tears over the destruction of Syria’s archaeological treasures by the Islamic fanatics and the flood of refugees fleeing to Europe to justify Nato’s own air campaign over Syria. But the US-led coalition’s aviation did nothing to dent the ability of the murderous militia of the “Islamic State” to launch offensive after offensive against Syrian government positions while the Turks used it as a pretext to bomb the Syrian Kurds, the very people the Nato jets were initially sent in to protect.
The real purpose of the Nato-led operations over Syria seems simply to prevent the Syrian Arab Airforce from attacking major rebel positions and to pave the way for the “no fly-zones” and “safe-havens” that the imperialists love to use as a pretence for open invasion and “regime change”.
Now it’s a different ball-game. The Russians have, in practice, imposed their own “no fly-zone” over Syria in accordance with the request of the Syrian government and international law.
The imperialists have, naturally, been bleating about “civilian casualties” that are largely a figment of the imagination of their propagandists — much like the supposed “moderate” Syrian opposition militias that are supposedly fighting ISIS as well as the Syrian army — while trying to brush aside demands for an independent international investigation of the US bombing of a hospital in Kunduz in northern Afghanistan which killed 22 people, including 12 members of the international charity Medecins Sans Frontieres (MSF) and wounded dozens more.
The primary contradiction in the world today is between United States imperialism and the rest of the world it seeks to dominate. When it suits them American, British and Franco-German imperialists will bang the drum of “human rights”. They’ll bleat on that they are the friends of the Arabs when they think they can get away with it.
But when the Lebanese were attacked by Israel in 2006, Anglo-American imperialism did nothing to stop it until it became clear that the Israelis were losing. They look on while the Palestinians languish under a brutal occupation and the Gazans suffer an inhumane and illegal blockade.
They posed as the friends of the Libyan people to get a mandate at the United Nations Security Council, giving undertakings to the Russian and Chinese governments which were soon broken and the mandate used to sanction Nato support for the overthrow of the Gaddafi government by Libyan reactionaries in imperialist pay. Renewed attempts to use the UN as a cover for imperialist “regime change” in Syria have since been foiled by Russian and Chinese vetoes.
We support the Russian intervention in Syria and we stand by the Syrian government and the communist and progressive forces in Syria fighting to defend their independence and their democratic, secular constitution.

New Worker editorial
8th October 2015
Posted by london communists at 4:39 AM No comments: