Winds of Change in Scotland

by our Scottish political affairs correspondent

Roch Winds: A Treacherous Guide to the State of Scotland 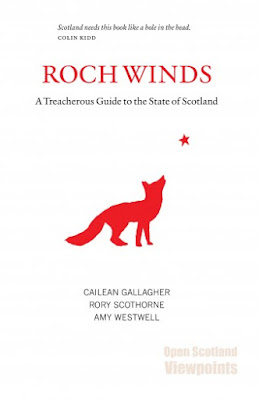 The authors of this short volume are three young (aged 23–25) graduates from the better universities who were active on the Yes side in the 2014 referendum in both the official Scottish National Party (SNP)-controlled Yes Campaign and the now defunct “National Collective”, which included large numbers of Scotland’s luvvies. At the same time they ran a blog critical of how many on the Scottish Left accepted unquestioningly that a Yes vote would, if not herald an immediate socialist dawn, bring about a more prosperous and equal Scotland. They have now changed their tune and are now much more sharply critical of the SNP, calling themselves revolutionary communists.
The title , meaning “Rough Winds” causing political change comes from a poem by Hamish Henderson, a poet and folk song collector who was possibly a secret member of the Communist Party of Great Britain (CPGB).
The three authors acknowledge having different views about what is to be done but claim to be “all indebted to, and break from a Marxist tradition”, explicitly calling themselves “revolutionary communists”. They cite Gerrard Winstanley, Rousseau. Adorno, Lenin, Rosa Luxembourg and several others as their inspiration – an interesting pick and mix. Although they are doubtful that that there is a sufficiently numerous left-wing constituency in Scotland they see hope in Jeremy Corbyn’s ascendancy to the Labour leadership.
This is not a book for those seeking detailed discussions of the state of Scottish politics nor for expounding the finer points of what should be done.  A “Spiky Provocation” is how the foreword fairly describes it.
Over the course of four chapters the authors provide a concise survey of the present state of Scottish politics, how it was arrived at, and offer some suggestions about what needs to be done. Their main target is what they call “social nationalism”, the SNP’s policy of combining of Labour’s social democratic rhetoric and its more traditional nationalism, which is hostile towards class politics. This provides a fig leaf for the SNP to claim to be all things to all men (and women), for the time being. They attempt to account for both the long-term decline of Labour and post-referendum collapse. It is an agreeable read, amusing where appropriate but some of their colourful metaphors go on just a bit too long after the point has been made.
They do however, have some sharp words about the SNP’s performance in government, for instance including attacking Alex Salmond’s grovelling to Donald Trump when he helped Trump to ride roughshod over the local council when it temporarily halted him destroying a Site of Special Scientific Interest that stood in the way of a “vitally needed” new golf course. This is only one example of the SNP bowing before big money. It is critical of both “Old” and “New” Labour, and of various “Left” groups including Common Weal who seem besotted with emulating a mythical Scandinavian model. Another target is the new Scottish establishment, the self-appointed “Civic Scotland” who think they have a divine right to decide what is good for the Scottish people, which usually means organisations funded by the SNP government endorsing whatever the SNP wants to do.
The book was, of course, written before this year’s Scottish parliamentary elections, when the SNP lost their majority but not their dominating position. It is amusing to note that some of the SNP figures cited as fresh faces are already distinctly shop soiled.
The book is, perhaps inevitably, better at diagnosing the problem than offering a cure, but there can be no doubt that their call for an increase in working class consciousness is the right one.
Posted by london communists at 8:53 AM No comments:

Muhammad Ali – Friend of the Arabs


By our Arab Affairs correspondent