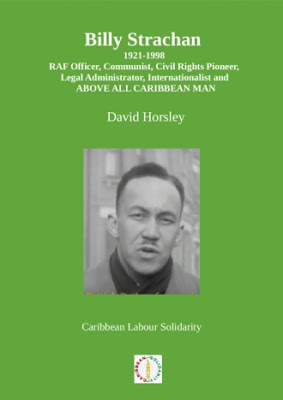 What images come to mind on hearing the word anti-imperialism? Maybe Latin American guerrillas, beautiful Palestinian hijackers, an African carrying a rocket launcher, or maybe a fighter in the jungles of South east Asia or the mountains of Nepal.
Often forgotten are the peoples of the Caribbean who originated from Africa. Victims of the Trans-Atlantic Slave Trade, taken from West Africa from the 17th century onwards to work in the plantations of the Caribbean and Southern US states.
The Trans-Atlantic Slave Trade, itself a crime against humanity, kick-started the industrial revolution in Europe. When some of their descendants arrived in Britain after the Second World War racists claimed they were “taking our jobs”. Had it not been for the suffering of their descendants these jobs would not have existed! One of these people was Billy Strachan.
Billy Strachan was born in Jamaica on 16 April 1921. After serving in the RAF as a navigator during the war, he settled in Britain in 1947. A life-long communist, anti-racist and anti-imperialist, Strachan was a founding member of the Caribbean Labour Congress (CLC).  The CLC was founded during the Second World War with the aim of representing the interests of Caribbean workers in Britain, campaigning for the independence of Caribbean nations and orienting them towards socialism.
The CLC, through its publication Caribbean News, was in the forefront of anti-racist campaigns in Britain and Solidarity with the Caribbean people against imperialism.
In 1953 the CLC was in the forefront of opposition to the illegal overthrown of the left-wing government of Guyana by British imperialism. It also showed solidarity with the people of Kenya and against Apartheid in South Africa. The CLC, along with Caribbean News, collapsed in 1956 however, due to disagreements over the direction of the organisation.
Despite this setback Strachan continued with his political activism. He was a life-long communist and supporter of socialist Cuba as well as numerous progressive campaigns. In 1959 he qualified as a barrister and wrote a number of legal books, including The Drink Driver and The Law (1973). He also wrote the influential pamphlet Sugar, The Story of a Colony published by Caribbean News in 1955.
The author argues that Strachan, despite his great contribution to anti-racism and anti-imperialism, has so-far been written out of history. He cites a number of publications, including Peter Fryer’s Staying Power – A History of Black People in Britain, which make no mention of Strachan. In the introduction he suggests that Strachan’s communist politics resulted in him being ignored by historians. It is for this reason that a publication celebrating his life is long overdue.
Posted by london communists at 2:30 AM No comments:

Kingston-upon-Thames is one of those outer London boroughs that seems to reek of Toryland. The malls and markets are a shoppers’ paradise and the riverside oozes of wealth. But first impressions can be misleading.
This town once had an active communist presence based in the local aircraft industry that began when Sopwith Aviation built their first factory in Kingston in 1912. Today the labour movement lives on in the unions, the Labour Party and the local NCP branch. But the borough is now a Liberal-Democrat bastion.
The aircraft industry dominated the town in the 20th century with three factories and a research centre that directly employed over 40,000 workers. That chapter in Kingston’s history sadly ended when British Aerospace sold their Kingston plant in 1992. Now all that’s left are a few street names and the dedicated galleries in RAF museums.
The factories have gone but thousands of workers are still employed in the public sector.
Kingston became part of Greater London in 1965 but it remains the administrative centre for Surrey despite half-hearted attempts to move the county seat to Woking. The town is also home for 20,000 students at the university that specialises in the arts, design, fashion, science, engineering and business.
Nowadays the town is dominated by the retail industry that has made Kingston the third biggest shopping destination in London. But hidden in plain sight behind the bustle of the malls and stores are reminders of our distant past.
The town began when a bridge was built over the Thames that divided Wessex and Mercia in Saxon days. It prospered as a royal centre under the patronage of the Wessex kings who eventually dominated the whole country.
The original settlement revolved around the market square, now dominated by the Old Town Hall towering above it. A gilded statue of Queen Anne looks down on the square atop the former town hall that was built in the Italian style in the 19th century. These days it’s full of arts and crafts stalls. The street market outside is open every day of the week.
Seven Saxon kings were said to have been crowned in Kingston on a stone that is now tucked away in a nearby garden outside the modern Guildhall. The Coronation Stone is said to be the stone on which the seven Anglo-Saxon kings were crowned at the nearby parish church of All Saints, where it was unearthed in the 18th century.
Although All Saints Church does date back to Saxon days, most of it is sturdy medieval work. It was put to good use by Oliver's Army, who used it to stable their horses when they garrisoned the town during the Civil War. The Puritan preacher Edmund Staunton was Rector at Kingston from 1633–1658 during those turbulent times and there’s a monument to his children in the church.
Pop in for tea at the excellent café that the church runs in part of the nave. On your way out stroll down to the Clattern Bridge over the Hogsmill river, which has miraculously survived since Norman days.
Finally, don’t miss one of the more unusual sights in Kingston – a modern art installation consisting of 12 old red phone boxes tipped up like dominoes on a street near the museum and history centre. Designed by David Mach, who was previously a lecturer in the Sculpture School at Kingston University, they’ve bemused Kingstonians and visitors alike since they went up in 1989.
Posted by london communists at 2:24 AM No comments:

No matter what his apologists may now say, Boris Johnson’s decision to prorogue just days after MPs return to work in September is simply designed to by-pass Parliament altogether over Europe until the Brexit deadline expires at the end of October.
The Johnson camp made it clear that they would play this card, if all else failed, to ensure that Britain leaves the European Union (EU) on 31st October. But the Remainers, at home and abroad, have been preparing for this day.
Meanwhile Jeremy Corbyn’s bid to win broader support for a no-confidence vote to force an early election has been diverted into a cross-party Remainer effort to block Brexit by legal challenges and procedural methods in parliament.
The Prime Minister, who somewhat belatedly embraced the Brexit cause to pave his way to Downing Street, is not a committed Brexiteer. During last week’s talks with the French and German leaders he apparently said that if they dropped their demand for an Irish ‘backstop’ he would accept Mrs May’s rubbishy withdrawal plan that would keep Britain within the EU in all but name. He doubtless warned them that if they refused they could end up dealing with a left-led Corbyn government. But he still came back empty-handed.
The leaders of Franco-German imperialism clearly have no interest in bailing out the Johnson government. It is equally clear that they believe that the Johnson government can be brought down. Whether that government is led by Corbyn is a matter of indifference to Brussels. They easily bought off the Syriza government in Greece and they no doubt think they can do the same with Labour. All that matters is that the current government is replaced by a new administration that will call for a second referendum to reverse the historic decision to leave the EU.
Johnson is falling into a Remainer trap. If the Tories had a working majority in the House of Commons the suspension of parliament to enable the Government to implement the decision of the 2016 referendum would not seem so controversial. But the Tories only have a majority of one – and even that depends on the votes of the 10 northern Irish bigots in the Democratic Unionist Party (DUP). The Remainers, which include die-hard Europhiles on the Tory backbenches, believe they have the numbers to subsume the Brexit issue into a constitutional crisis over the authority of Parliament.
The Speaker of the House, John Bercow, has stated that he will not permit Parliament to be prorogued in such a way. Prorogation is, however, the gift of the monarch, who acts on the advice of the Prime Minister, not the Speaker. Refusing the advice of the sitting premier challenges one aspect of the sovereignty of the Westminster parliament whereas ignoring the views of the Speaker challenges another.
Whatever happens next week all the Remainers will oppose Johnson whilst some of his own camp will join them on ‘constitutional’ grounds.
We don’t want the bogus ‘people’s vote’ that the Remainers say will solve all our problems. We want a people’s government that will restore the national health service and the rest of the ‘welfare state’ that existed until the Tories destroyed it during the Thatcher era. The only way out of the crisis is another general election and the only way to end austerity is to make sure that Labour gets the biggest possible vote when it comes.
Posted by london communists at 7:40 AM No comments: