THE OLD ERA ended in Cuba in 1958. The revolutionary movement led by Fidel Castro and his guerrilla army swept away the hated Batista regime ending decades of corruption and American domination. Today the Cubans are celebrating the 50th anniversary of people’s power – and not just on the island of socialism.
A new biopic about Che Guevara hit the screens in January to critical acclaim in Britain and throughout the world. And we will get a further taste of the Cuban experience in a festival organised by Cuba50 that will run throughout the year. Events, large or small, will take place across the country featuring some of Cuba’s brightest talents in a dazzling celebration of the island’s rich artistic, musical and cultural heritage.
In London it began last month with an exhibition of vintage and contemporary photos from the archive of the Magnum photo agency including classic portraits of Fidel and Che as well as images taken during those heady days in Havana in 1958 when the Batista regime was overthrown.
The small collection on display, some 40 images, is naturally mainly of interest to snappers and specialist collectors, but it is well worth the trek from Barbican station just to see how the eye of the Magnum photographers capture the moment on the streets. Buildings and monuments remind us of the past but only the camera can capture the moment of reality. Passion and banality is equally frozen in time – the past preserved in black and white for all eyes to contemplate.
This is just the start. Cuba 50 is supported by the Cuban Ministry of Culture, Cuban Embassy, Cuba Solidarity Campaign and a number of unions, tourist and business interests. Further details can be obtained on their website http://www.cuba50.org or writing to:
Cuba 50 c/o Unite218 Green LanesLondon N4 2HB
The Magnum exhibition is open Wednesday to Friday from 11.30am - 4pm and it carries on till the end of the month. Ring the bell to gain admission at:
Magnum Print RoomMagnum Studios,63 Gee StreetLondon, EC1V 3RS
Posted by london communists at 1:56 PM

Capitalism does not have the answers!

“Not since the First World War has our banking system been so close to collapse,”
Mervyn King, Governor of the Bank of England.

“We who have looked to the self-interest of the lending institutes to protect shareholders’ equity, myself especially, are in a state of shock and disbelief,”
Alan Greenspan, former Chair of the United States Federal Reserve.

ISRAELI forces are pounding the Palestinians as their deadly ground, sea and air assault on the Gaza Strip enters its second week. Over a thousand Arabs have been killed and thousands more wounded, mostly civilians like the 42 killed when a UN school was shelled by Israeli artillery on Tuesday.
Palestinian doctors say many families are in need of ambulances, but medical workers were struggling to reach casualties because they were being shot at by the Israelis. Iyad Nasr of the Red Cross in Gaza City said that the military operation has worsened the hardships created by the Israeli blockade over the last 18 months.
The United Nations says 13,000 people, over 2,000 families, have now been internally displaced because of the fighting, and that is just in the north of the Strip.
Tzipi Livni, the Israeli foreign minister, says that there is no crisis and that aid is getting through, but Christopher Gunness, the UN Relief and Works Agency (UNRWA) spokesman, said her denials were absurd. “The organisation for which I work – UNRWA– has approximately 9,000 to 10,000 workers on the ground. They are speaking with the ordinary civilians in Gaza... people are suffering,” he said. “A quarter of all those being killed now are civilians. So when I hear people say we’re doing our best to avoid civilian casualties that rings very hollow indeed.”
terror
Israel commandos backed by tanks and helicopter gunships are spreading terror across the towns and refugees camps in the enclave that shelters over a million and a half Palestinians but there’s no real plan to this invasion and their troops are acting in chaos and confusion. Hamas militiamen and Popular Front for the Liberation of Palestine (PFLP) commandos are putting up a fierce resistance in the streets and they say their fighters now control the agenda on the battlefield.
Palestinian partisans are trying to inflict as many casualties as they can on the Zionists while hoping to take some Israelis prisoner to use as bargaining chips when the guns eventually fall silent.
PFLP officer Abu Jamal said that the resistance movements are in a high state of unity and close communication and they are operating in full confidence of victory.
The resistance say they have taken two Israeli soldiers captive and Hamas fighters claim to have destroyed seven tanks and downed one helicopter gunship.
They put Israeli losses at 11 dead and 48 wounded in the fighting so far. Palestinian rockets are continuing to land deep into Israel hitting Israeli military bases and towns including Gedera, just 30 km south of Tel Aviv.
The resistance warn that others will be aimed at the Israeli nuclear research establishment in Dimona if the fighting continues.
The Israelis put their losses at six soldiers dead and 31 wounded including Colonel Avi Peled, the commander of the crack Golani Brigade who was seriously injured in fighting Monday night. They say nothing about prisoners but they admit that they have “lost contact” with one of their men.
The Americans blocked a Libyan-backed ceasefire proposal at the UN Security Council last weekend. But international efforts to stop the war are growing following the latest Israeli atrocities. Israel has agreed to halt the fighting for three hours a day to allow humanitarian aid into the Gaza Strip and Hamas is now studying an Egyptian proposal for a ceasefire backed by the Americans and the European Union. deep concern
But most Arabs believe that the Israelis will carry on fighting until the new American president is sworn in later in the month and Barak Obama is saying nothing apart from expressing his “deep concern” until he enters the Oval Office on 20th January.
Once again the world sees the true face of Zionism in action against the heroic and long-suffering Palestinian masses. In Britain and throughout the world people are taking to the streets to demand an immediate end to the slaughter in Gaza and for the complete restoration of the legitimate rights of the Palestinian Arabs. Only then will the peace return to the Middle East.
Posted by london communists at 5:23 AM

Solidarity with the Palestinian people

We, communist and workers parties from all parts of the world, strongly condemn the repeated murderous air strikes by the Israeli air force on Gaza which resulted in the killing of over 340 Palestinians. By these brutal attacks and other crimes by the armed forces, the government of Israel try to achieve what was impossible by imposing the wall, the siege and blockade: to break the resistance of the Palestinian people.

The policy of genocide and state terrorism by the Israeli government, supported and endorsed by the powerful imperialist forces in the USA and EU and accepted by some Arab reactionary governments is a new provocation against the peoples and the worldwide solidarity movement. We call on the workers, women, youth and other sectors, all anti-imperialist and peace loving forces to mobilize against the criminal attacks and policy by the Israeli government, to demand immediate stop and sanctions against Israel. To develop immediate solidarity actions and humanitarian support for the Palestinian people.

Our parties express firm solidarity with the resistance against the aggressions, with the progressive, anti-imperialist and communist forces in Palestine and Israel, with all those fighting for the establishment of an independent State of Palestine within the borders of 1967 with East Jerusalem as its capital. 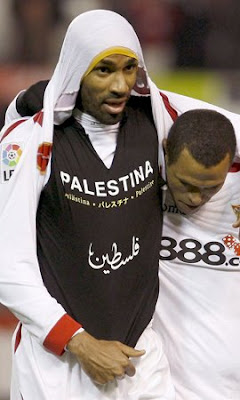 
To: Spanish Football Federation
U.E.F.A.
The World Federation of Trade Union representing 65 million members from 95 countries all over the World expresses its full support to Sevilla striker Frederic Kanoute, who is facing a fine from the Spanish football federation for revealing a T-shirt expressing support for Palestine during a match.
Kanoute lifted his Sevilla shirt over his head after scoring in the match against Deportivo La Coruña on Wednesday to display a T-shirt on which the word "Palestine'' was printed in several languages.
He had the right to express his support to the Palestine people. A crime is being committed in Gaza with more than 700 people killed until now and the international community is doing nothing to stop it.
Frederic Kanoute deserves congratulations because he has humanity and he is showing solidarity. The WFTU demands from the Spanish Football Federation to immediately stop their actions against Frederic Kanoute and to respect the right of football players to express their opinion. We are on his side.
Send protest letters to: Spanish Football Federation E-mail: rfef@rfef.es Fax: +34 914 959 801
U.E.F.A. Email: info@uefa.com Fax: +41 (0) 848 01 2727 / F. Kanoute: oumar@kanoute.com

THE SECRETARIAT
Athens
9th January 2009
Posted by london communists at 8:34 AM

No to the Israeli invasion to Gaza -Stop the massacre of the Palestinian people!

The World Peace Council (WPC) expresses its vehement condemnation of the yesterday’s invasion of Israel into the Gaza strip in Palestine. The Israeli cruelty has no end. After the week long bombardment of innocent children, women and civilian population, the heavy armed war machinery of Israel is escalating further its aggression with a ground invasion. The hundreds of dead Palestinians, the thousands of injured by Israeli bombs are crimes against humanity and have to be put to court as such.

The Israeli regime would not be able to commit those brutal attacks without the full support of the US administration (outgoing and incoming one). The position expressed by the Czech EU- Presidency (about “defensive character of the invasion”) shows the criminal complicity of the European Union, which is far away from being more human or even less a counter pole of the USA.

The government of Israel is counting also on the internal differences and contradictions amongst the Palestinians and the Arab world. This is the moment of highest responsibility and unity against the troops of invasion and occupation. We call upon all the peace loving forces in the region to unite against the imperialist plans in the Middle East, against the “procurator” of Imperialism in the region, the reactionary and inhuman Israeli regime.

We express our deep respect and solidarity to the forces struggling for peace inside Israel and we salute their brave protests and demonstration in Tel Aviv and other cities.

The World Peace Council is calling upon the Security Council of the UN and its Human Rights Council in Geneva, to prove their minimum respect to the founding Charta of the UNO and the Universal declaration of Human Rights, by condemning clearly the Israeli aggression and imposing an end to the invasion and the occupation of the Palestinian Territories, which is the first cause for all the suffering of the Palestinian People since 60 years now.

In this moment the peoples of the world have to react with massive political protests and actions against the injustice and genocide of the Palestinian people. The WPC calls for increased solidarity and humanitarian aid of all means and will take respective initiatives in the coming days.

The Secretariat of the WPC


Posted by london communists at 6:40 AM