On April 5th , the Democratic People's Republic of Korea (DPRK) successfully launched an experimental communications satellite, the Kwangmyongsong-2, into orbit by means of carrier rocket Unha-2. The satellite is part of the DPRK's long-term plan for the development of outer space. Both carrier rocket and satellite were made and developed by the DPRK using only their own resources and technology, in keeping with the guiding philosophy of self-reliance.
The DPRK points out that the satellite is of decisive significance in promoting scientific research into the peaceful use of outer space and solving scientific and technological problems for the launch of practical satellites in the future. The successful satellite launch was conducted against the backdrop of a national drive aimed at bringing about a renewed revolutionary surge throughout the DPRK to "open the gate to a great prosperous and powerful nation without fail by 2012, the centenary of birth of President Kim Il Sung, under the far-reaching plan of General Secretary Kim Jong Il".
Despite the fact that it is the DPRK's sovereign right to engage in peaceful scientific experimentation and to create the conditions for its own prosperity, the US, Japan, South Korea and Western European powers, including Britain, demanded that the DPRK be condemned. They have persisted in spreading the misleading impression that the DPRK was testing an intercontinental ballistic missile, capable of carrying a nuclear warhead. The US puppet government of south Korea branded the launch "reckless". The US and Japan reacted to the news of the satellite by escalating the warmongering and disinformation campaign against the DPRK and demanding its further international isolation.
US President Barack Obama during his visit to Prague on April 5 used the occasion to condemn the DPRK with high-sounding rhetoric: “Rules must be binding. Violations must be punished. Words must mean something.” If Obama’s call for nuclear disarmament meant something, why then was he in the Czech Republic to promote a US missile base? If his words meant something, why does the US not withdraw its arsenal of one thousand nuclear weapons from the south of Korea, together with its tens of thousands of troops, in order to promote peace and security on the Korean Peninsula, and end its threats of aggression against the DPRK? To anyone that cares to see through the rhetoric to the objective reality, the spectacle of this representative of the armed international might of the US calling upon the blockaded and sanctioned DPRK to be peaceful and follow the rules is ludicrous and shameful.
Bill Rammell of the British Foreign Office added his voice to the clamour in arrogantly condemning the launch, and blustering that the British government was “seeking at the Security Council the most united and robust international response”.
In line with these outlandish statements of the big powers, the UN Security Council on April 13 approved a “Presidential Statement” condemning the launch and linking it with the nuclear issue, as well as adjusting the sanctions imposed on the DPRK in October 2006. This is an abuse of the Security Council to violate the sovereign right of the DPRK.
In response, the DPRK Foreign Ministry issued a statement, pointing out that throughout its history the Security Council had never before taken issue with satellite launches. It rejected the unjust action of the Security Council as infringing upon the sovereignty of the DPRK and seriously hurting the dignity of the Korean people. It pointed out that since the six-party talks have now turned into a platform to force the DPRK to disarm and to bring down its social system, the DPRK would no longer participate in the talks nor be bound by any agreement there, including the disablement of its nuclear facilities, which it will now take measures to restore.
Our Parties vigorously condemn the warmongering and chauvinism of the US and Britain. We call on all democratic and peace-loving people, irrespective of their political viewpoints or other considerations, to reject the infantile hysteria and outright disinformation being generated against the DPRK over this issue, and to take a stand in defence of its sovereignty and independence. In our view, this is a duty of the working class and people in order to contribute to the peace and security not only of the Korean Peninsula but world-wide.

Kim Il Sung: a life dedicated to the people 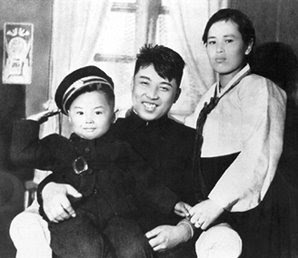 IT HAS LONG BEEN a Marxist tradition to elevate the lives of comrades whose daily work was an example to others, developed and advanced Marxist-Leninist theory or led the struggle for liberation. Kim Il Sung was all of these. A fighter, a thinker and a leader, Kim Il Sung was an outstanding communist of the 20th century whose name will forever be remembered as the founder of the modern Korean communist movement that began amongst the patriotic youth of Korea when he was a student in the 1920s.

Kim Il Sung was born into a world dominated by the great colonial powers of Europe, the United States and Japan. In Korea the old feudal rulers had been ousted by the Japanese imperialists and the peninsula turned into a colony of Japan.

Wherever there is oppression there is always resistance and Korean patriots tried to fight-back in whichever way they could. Some nationalists, those representing the landowners and bourgeois elements looked to Nationalist China and America for help. Others were inspired by the Bolshevik revolution in 1917.

In the 1920s the Korean communist movement was riddled with divisions that had left them isolated from the masses. Kim Il Sung condemned those who simply hoped to rely on outside forces or those who strove for the recognition of others, as a disgrace to the Korean nation.

Kim Il Sung saw the uselessness of the sectarians, flunkeyists, dogmatists and factionalists who called themselves communists in the 1920s. So he decided to form a communist movement from the youth and the grassroots of the villages and factories.

Kim Il Sung stressed that a revolutionary movement was not something to carry on with the approval of others but a work to be done out of one’s own conviction. Problems should be solved by oneself, he said, and only when the struggle was waged well would others recognise it.

In words as relevant today as when they were written Kim Il Sung said: “Factionalism is a product of bourgeois and petty bourgeois ideologies, particularly of self-heroising, fame-seeking and careerism. It has nothing in common with the revolutionary ideas of the working class”.From student leader to guerrilla commander Kim Il Sung grasped the fundamental principles of Marxism and applied the lessons of the Great October Russian Revolution to the concrete conditions of the Korean people, who were slaves of the Japanese Empire. The “Young General”, as he soon was called, gathered a group of young communist men and women prepared to take on the might of the Japanese army.

Over the years that small band of heroes grew into a people’s army that humbled the Imperial Japanese Army in 1945 – a victory that led to the establishment of the Democratic People’s Republic of Korea. And it was that People’s Army that fought US imperialism and its lackeys to a standstill during the Korean war and forced the American imperialists on their knees begging for an armistice in 1953.

Kim Il Sung was a great commander in war and a great leader in peace. In the north of Korea, so brutally partitioned by imperialism, he built a modern communist movement dedicated to serving the working people of Korea and he led the people in the mass struggle to build a new life after they had won their freedom in 1945.

The Workers Party of Korea with Kim Il Sung at the helm led the battle for land reform, education and socialist construction in the 1950s and 60s and then pushed forward on the engineering, technical and scientific fronts to build a modern socialist republic where every individual worker is master of his or her own life.

In western Europe communists understood the economic case for scientific socialism but ignored the philosophical aspects of the teachings of Marx and Engels. Though the role of mass action was clearly understood, the role of the individual was often ignored. Though the achievements of the Soviet Union led by Lenin and Stalin were studied, they were often not properly understood.

Kim Il Sung not only grasped Marxism-Leninism but he applied it to the concrete conditions of the Korean people. He knew that once the masses realised their own strength they would become unstoppable. He knew that serving the people was the be-all and end-all for the Korean communists and for the Workers’ Party of Korea that he launched in 1945. He developed Korean style socialism into the Juché idea – which elevates the philosophical principles of Marxism-Leninism as well as its economic theories – and focuses on the development of each individual worker, who can only be truly free as part of the collective will of the masses. In the western world Juché is simply described as “self-reliance” but it is much more than that. Kim Il Sung said that working people could only become genuinely emancipated if they stood on their own feet. But the Juché idea doesn’t negate proletarian internationalism. The Soviet Union, People’s China and the people’s democracies of eastern Europe all closed ranks behind Democratic Korea during the Korean war. The Korean people responded with their trade and assistance whenever they could, while Korean experts and advisers helped the Vietnamese, the Arabs and the Africans struggling to break the chains of colonialism and continue to do so today.

In the world communist movement Kim Il Sung steered a careful path during the Sino-Soviet ideological conflict remaining on good terms with the Soviet and Chinese parties.

Unlike British communist leaders in the past, and indeed many others in Europe and beyond, Kim Il Sung stressed that Marxism-Leninism goes far beyond simple economic formulas and the Soviet “model”.

Kim Il Sung knew that material prosperity and ideological strength were of equal importance to the people. He called this the twin towers. Though both couldn’t advance simultaneously, when progress in one was made the other had to be advanced to catch up.

This was pointed out by Stalin in the 1930s when he told Soviet shock workers, the Stakhanovites, that working people had benefited concretely from the revolution. All previous revolutions had failed but: “Our proletarian revolution is the only revolution in the world which had the opportunity of showing the people not only the political results but also material results” Stalin declared.

But Stalin’s revisionist successors abandoned the ideological tower and failed to even maintain the material benefits for the Soviet masses.

And after the counter-revolutions in the Soviet Union and the eastern European socialist countries, an enormous setback for communism globally, when parties were becoming demoralised and failing around the world, Kim Il Sung stopped the rot by summoning a global conference of communist and workers’ parties in Pyongyang in 1992.

When Kim Il Sung passed away his successor, Kim Jong Il, told the Korean people and the world that they could “expect no change from him” and with Kim Jong Il at the helm, the Workers’ Party of Korea has won great victories in recent years. Natural disasters have been overcome.

Diplomatic isolation has been broken, the intrigues of US imperialism have been exposed and Korean rockets reach for the stars.

Kim Il Sung, the great leader of the Korean revolution, died in 1994 but his work lives on in the Workers’ Party of Korea and in the colossal achievements of the Democratic People’s Republic of Korea today.
Posted by london communists at 7:48 AM

LONG LIVE THE FRIENDSHIP OF THE PEOPLES

DOWN WITH THE NEW ORDER OF THE IMPERIALISTS