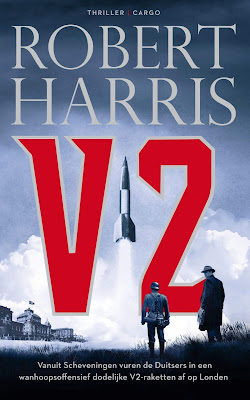 Historical fiction is a good way of learning historical facts; more people died making the V2 missile than were killed by it. Its victims included 200,000 slave labourers as well as 2,700 civilian casualties mostly in greater London. With this in mind its creator Wernher Von Braun, who was after all an officer in the SS, should have been put on trial for war crimes. The V2 rocket, correct name Retribution Weapon II is the subject and title of Robert Harris latest novel. The novel revolves around two opposing groups of people; those who launched it and those employed to stop it.
Kay Caton-Walsh, an officer in the Women’s Auxiliary Air Force (WAAF) is part of a group of women using mathematical formulae to calculate the location of the V2 launch sites. She is stationed in the northern Belgian town of Mechelen, recently liberated by the allies. Kay is led astray by vivacious friend Barbara; a touch of Bletchley Girls meets Sex and the City. The local population is desperately short of food and it is difficult to know who to trust. Around eight thousand Belgians joined the Walloon Legion; later integrated into the SS and responsible for numerous atrocities in the Soviet Union.
Although it was largely destroyed by Soviet forces in the Korsun–Cherkassy Pocket in February 1944 its founder Leon Degrelle saw the SS as the first European Army. Are there any more reasons why Remainers should shut themselves away in darkened rooms and hang their heads in shame?
Ninety-four miles away in the Dutch town of Scheveningen, close to the Hague is Dr Rudi Graf. His job is to launch the V2s. Graf’s story is intertwined with innocent boyhood dreams of space travel, combined with disillusionment with an evil and soon to be defeated regime. Much of Graf’s story concentrates on the technical failings of the V2 and as the novel reaches its climax Graf struggles continually harder with his conscience.
V2 was written in the first lockdown in the spring of 2020. There are no doubt parallels between today’s NHS workers in the fight against Covid-19 and those, like the WAAF who worked in the backrooms of World War II to limit the damage done by V-weapons. Harris, despite his dreadful politics is still a master of historical fiction and V2 is no exception.

Posted by london communists at 6:11 AM No comments: