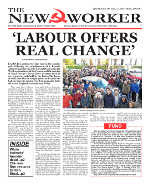 Last weekend’s coup that overthrew the government of Evo Morales in Bolivia has been condemned by communists and progressives all around the world. The World Federation of Trade Unions (WFTU), which represents some 97 million workers across the five continents, has condemned the coup along with the Brussels-based International Trade Union Confederation  (ITUC).
Morales, Bolivia’s first indigenous president, whose Movement Towards Socialism (MAS) policies lifted nearly a fourth of the country’s population out of poverty, was forced to resign by army leaders that many believe are in the pocket of US imperialism.
Venal opposition politicians, in the pocket of US imperialism, refused to accept the result of the election held on 20th October and launched a wave of terror across the country.
Reactionary gangs made death threats to ministers and their children, and fire-bombed the houses of Morales’s supporters. They attacked MAS leaders and Bolivian communists who have consistently supported the MAS government and its progressive policies. Last weekend they even burned the Wiphala flag that represents Indigenous peoples of the Andes and is a symbol of Indigenous resistance after centuries of colonisation.
Their leader is Luis Fernando Camacho, an immensely rich bible-puncher who rose from the fascist movements in the Santa Cruz region where the USA has encouraged separatism in the past. Known as ‘El Macho’, the opposition leader is an openly racist misogynist who unapologetically represents the interests of the elites in his department and the country. An evangelical Christian, Camacho talks with a Bible in his hand and pulls on the Bolivians religious beliefs to argue that Morales is against them.
His chief henchman is former president Carlos Mesa, a veteran right-wing politician and ‘pro-business’ privatiser with extensive ties to Washington.
Morales and some of his supporters have now fled to safety in Mexico. But attacks on MAS activists continue in the country that for 14 years had defied the might of US imperialism to take the path of independence and social justice.
Cuban President Miguel Diaz-Canel called it a violent and cowardly coup d'état that attacks democracy in Bolivia. The Labour leader Jeremy Corbyn said: “To see Evo Morales who, along with a powerful movement, has brought so much social progress forced from office by the military is appalling. I condemn this coup against the Bolivian people and stand with them for democracy, social justice and independence”. But this was condemned by Tory foreign minister, Dominic Raab, who accused Jeremy Corbyn of putting “Marxist solidarity ahead of democracy” in condemning the coup.
It was, however, welcome news for the big mining companies of the USA, Canada and south Korea that have long had their greedy eyes on Bolivia’s largely untapped lithium reserves – a key ingredient for the batteries of mobile phones and electric cars.
It was also good news for the ruling circles in the USA, which is not surprising as they’ve long been working to rid themselves of this challenge to American hegemony on what they consider to be their own doorstep.
Evo Morales has vowed to return with “more strength and energy” to serve his people. All communists should support his efforts and those of the mass movements of Bolivia to end US interference and restore democracy in the country.
Posted by london communists at 5:31 AM