Guildford is in the heart of the ‘stockbroker belt’ that houses the wealthy commuters who work the money markets of the City of London. Visitors may assume that the University of Surrey and the impressive modernist cathedral on the hill gives Guildford ‘county town’ status. In fact Surrey’s administration centre is Kingston-on-Thames, which left Surrey to join Greater London back in 1965. But you could easily be forgiven for thinking that this is the real capital of Surrey when you walk down the high street of this prosperous market town in the heart of southern Toryland.
Though somewhat off the tourist radar, there’s plenty to see in the heart of what was the old medieval centre. The Guildhall in the High Street goes back to Tudor days. Guildford museum is housed in what was once the gatehouse of Guildford Castle and the art gallery is in a 17th century town house. Both are well worth visiting along, with the nearby castle that has been recently repaired for the benefit of tourists.
The Norman keep was re-roofed in 2004 to provide for an interpretative display and small shop. For a very modest fee you can even walk up safely to the roof for spectacular views across the Wey valley. In the summer you can see an amazing display of flowers in the castle gardens as well as a life-size statue of Alice of Looking Glass fame, a reminder of the fact that Lewis Carroll stayed nearby in his sisters' house, from 1868 until his death in 1898.
Guildford is easily reached by road and is just 35 minutes away from London Waterloo by train. It’s well worth a day-trip and it’s also an ideal base for longer visits to other attractions in the county.

Posted by london communists at 3:19 PM No comments:

Down House: A unique place in the history of science and evolution 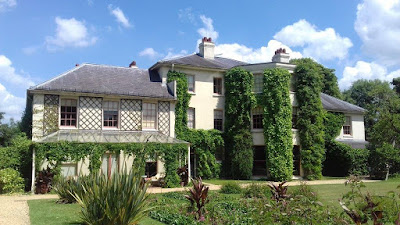 
The works of Charles Darwin and Karl Marx shook and shocked Victorian Britain. Although they lived less than 20 miles apart from each other they never met. But Marx genuinely admired Darwin's On The Origin of the Species despite its “crude English style” and even sent Darwin a personally inscribed copy of the recently published second edition of Das Kapital in 1873.
Down House was Darwin’s home for 40 years until his death in 1882. Darwin and his wife Emma remodelled the house and its extensive gardens, which Darwin used as an open-air laboratory. Here Darwin worked on his theory of evolution that was first published in 1859.
In Darwin’s day the house was in the village of Downe, a parish in Kent. It later became a girls’ school and the home of the Darwin Museum. Now part of Bromley in Greater London, the house, gardens and grounds is run by English Heritage and open to the public throughout the year.
There’s plenty to see. Anyone interested in the life and times of Darwin will be fascinated by the gardens and the exhibits in the museum as well as rooms that have been restored to appear as they would have looked in Darwin’s day. There’s the inevitable visitors’ shop for books and souvenirs, and a very welcome café in the courtyard.
But beware – plan your journey unless you’re driving because it’s not easily served by public transport. Although you can get trains from central London to Bromley South or Orpington you’ve then got to get a bus for the rest of the journey.
Down House is in Luxted Road, Downe, Kent, BR6 7JT. The house, garden and grounds are open to the public at the usual English Heritage rates. There’s free parking and Down House opens daily from April to the end of October, and on weekends only from November until the end of March.
Posted by london communists at 4:54 AM No comments: