THE SOCIALIST Party of Great Britain has celebrated the
centenary of its foundation (June 1904) and the production
of its monthly paper with a special edition of selected
articles in a single volume. On an occasion such as this it
would be churlish not to congratulate the SPGB on its
achievement, especially as it purports to be supporting
workers' struggle to end their exploitation and achieve a
socialist society.

Indeed some of the articles, such as the one about the
attack on the Tonypandy miners, are very good in exposing
the ruthlessness of the capitalist class and the betrayal
of right-wing Labour leaders. But the SPGB is based on an
ideological position that is fundamentally wrong and leads
it into a position of condemning any and all attempts
hitherto to establish a socialist society.

Not only that, but the national liberation movements are
also condemned and the valid fight for reforms within
capitalist society also tend to be denigrated. To prove the
point, let us quote a full passage from the foreword of the
collected articles. It is a long quotation but it must be
made in full in order to do justice to the SPGB argument:

"The Socialist Party is particularly proud of the fact
that one of the things we have succeeded in doing over the
past 100 years has been to keep alive the original idea of
what a socialist society was supposed to be  a classless,
stateless, frontier less, wage less, moneyless society, to
define it somewhat negatively. Or more positively a World
community in which the natural and industrial resources of
the planet will have become a common heritage of all
humanity, a democratic society in which free and equal men
and women co-operate to produce the things they need to
live and enjoy life, and to which they have free access
with the principle from each according to their ability, to
each according to their needs." Accepted

The seed of socialist society germinates in the womb of
the capitalist system and when through struggle  economic
and political  it breaks free of the body of its parent, it
inherits many of he faults, inadequacies and shortcomings
of the previous society. To overcome these, as well as
developing the necessary production to eliminate poverty,
and achieve a situation where co-operation is an even
greater force than competition, will certainly take
decades, perhaps centuries.

When judged by such standards as the SPGB puts forward, it
is not surprising that any attempt to break with the
fetters of capitalism is condemned by the SPGB as being
state capitalist.

In addition the SPGB adopts a position of hostility
towards such countries. For instance, during the vicious
war launched by the United States against Vietnam, the SPGB
declared that they did not support either side and said:

"Of course defeat in Vietnam and the whole of South East
Asia would have serious consequences for American
capitalism. That is why they are fighting. It would deprive
them of access to many raw materials, but more important it
would shift the balance of power around the Pacific in
favour of Chinese state capitalism.

"Victory for the Vietcong, as we have already explained,
would shift the World balance of power from American to
other capitalist powers. This is not something that is in
the interests of workers, or something they should support.
There is not an issue at stake in Vietnam worth a single
worker's life."

Lest there be any doubt we can include another quote:
"Politically the socialist party nailed its colours to the
mast on the nation or class issue at the outset and the
article here on the rise of Sinn Fein in Ireland is a
stinging attack on the idea that national liberation
movements against established imperialist powers are in
some way progressive and worthy of working class support."

Another crucial issue ignored in this volume is the
question of state power and the concept of the dictatorship
of the proletariat in particular. Without the working class
establishing its authority on society, having command of
its oppressive and persuasive organs of power, socialism
cannot be developed. This goes far beyond the social
democrat idea that socialism can be achieved comfortably by
parliamentary legislation. For socialism to be developed
there has to be mass involvement of the working class,
which takes political power to itself and can effectively
defend itself against the national and international
efforts to destroy it whilst at the same time taking
measures to consolidate and develop conditions for a new
society.

The extent to which the revolution will be bloody or
bloodless depends on the unity and determination of the
working class to champion the interests of the bulk of the
people. This is essential to win firm allies in support of
the revolutionary process. It will also depend on the
degree to which there is disaffection among the personnel
of the coercive forces of capitalism. This will determine
the extent to which the capitalist class, which is being
displaced, can command the loyalty of its state apparatus.
Invalid

From the standpoint of the SPGB, such an authoritarian
interpretation of socialism would be invalid. But in the
world we live in the working class needs to be aware that
it is dealing with a ruthless adversary, which as we have
seen in innumerable wars does not blink an eyelid at
consigning millions of men, women and children to their
death.

The SPGB's general negative approach to people in struggle
is often reflected in the articles published in this book.
This includes the efforts of the suffragettes and extends
to people active in the peace movement. This is a book that
has to be read very critically. It would be nice to think
that, on its centenary, the SPGB would reflect
self-critically on its ideologically flawed position. Only
in this way can it correct its practice and really play a
positive role in the fight or socialism.

Currently it is in effect opposing and impeding all real
efforts in the direction of socialism because they cannot
achieve full, perfect communism in the blink of an eye. And
this position helps to sustain capitalism.

Posted by london communists at 6:19 AM No comments:

For a strong European communist movement! 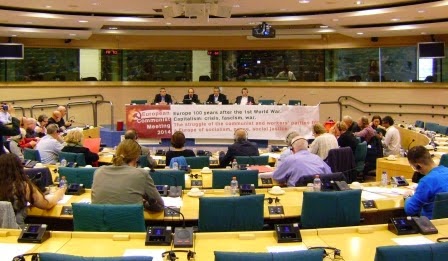 EUROPEAN communists met in Belgium last week to co-ordinate their campaigns against Nato and the European Union in the struggle for peace and socialism across the continent. Nineteen parties including the New Communist Party of Britain took part in the meeting of the Communist and Workers Parties of Europe Initiative at the European Parliament in Brussels.
Giorgos Marinos, a member of the Politburo of the Communist Party of Greece (KKE), made the introductory speech to the plenum of the European Communist Initiative, opening a debate that concluded with the formation of an action plan for the strengthening of the people’s struggle against the EU and Nato and countering the bourgeois offensive against the working class throughout Europe.
The Communist Initiative conference was, he said, a serious step forward for the regrouping of the communist movement in Europe, which is a precondition for the strengthening of the people’s struggle against capitalism and the imperialist wars and for the strengthening of the struggle for socialism in Europe.
The Communist Initiative is supported by most, but not all of Europe’s communist and workers parties.  But virtually all of them took part in the annual European communist conference that was held at the same venue on the previous day. Opened by Greek communist leader Dimitrios Koutsoumpas, delegates from 31 parties reported on their work over the past year and their stand on the problems facing the world communist movement today.
On the first day NCP leader Andy Brooks delivered a report which included an analysis of the Scottish independence referendum. At the Communist Initiative meeting he intervened during the discussion on Ukraine to call for greater solidarity with the anti-fascist struggle and for full support to the people’s republics of Novorossiya in the east of the country.
The NCP is a founder member of the Communist Initiative (CI) which was established last year to co-ordinate workers’ opposition to the European Union and to counter the European Left Party, a left social-democrat and revisionist bloc that included the French Communist Party and Syriza in Greece.
The CI has 29 member parties from 26 countries who elected a Secretariat last year. The Communist Initiative is not a unified political party, nor is it a “European Party”, such as those established by the European Union.  All the member parties have the same rights and obligations, while political decisions are taken according to the principle of unanimity.

The Communist and Workers’ parties of Europe, which met at the European Communist Meeting 2014, held in Brussels on the 2nd October, examined the developments in Europe, international developments and exchanged views and experiences from their activity.

Today, the workers and the other popular strata of Europe are coming face to face with the deadlock of the capitalist development path, such as unemployment which afflicts millions of workers and in particular strikes against young people and women. The flexible forms of employment are becoming widespread, collective labour agreements as well as social and social-security rights are being abolished, poverty is increasing.

The inter-imperialist contradictions, the aggressiveness of the imperialist unions, above all of the EU and NATO, lead to new breeding grounds for wars, which break out in Africa, the Middle East and the wider region, as well as in Europe, as the developments in Ukraine demonstrate. Nationalist, racist, and even openly fascist forces are being strengthened, with the support of the bourgeois class, in many European countries.

Our common assessment is that in these conditions the working class, the popular strata and youth must strengthen their mass struggle against the EU and NATO, against capitalism which gives rise to economic crises and war.

Capitalism is a rotten exploitative system that cannot be repaired, it cannot provide solutions for the people’s problems, it has reached its historical limits. The struggle of the working class, the peoples, will become more effective to the extent that it is directed against it. Workers must decisively denounce imperialist wars, the policy of repression, anti-communism and the criminal activity of the fascist organizations.

Our parties devote, and will devote, their energies in the future in order to reinforce the people’s struggle, to develop working class solidarity. They will continue the work of organizing the working class, in constructing the social, people’s alliance to render more effective the struggle for the overthrow of capitalist exploitation so that workers can enjoy the wealth they produce.
Socialism is timely and necessary

Other Parties
The Pole of Communist Revival in France (PRCF)
Union of Revolutionary Communists of France
Communist Party, Italy

Posted by london communists at 4:35 AM No comments: