Not all skinheads are racists but... 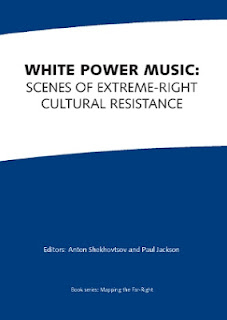 NOT ALL skinheads are racists. In the beginning they were just a working-class youth backlash against the sundry trends of “swinging London” when they first appeared on the football terraces in the late 1960s. The braces, boots and shaven heads were the antithesis of the middle strata fads that were promoted in the bourgeois media at the time and in those days skins extolled Jamaican reggae, “aggro” and football hooliganism with equal relish.
A distinct skinhead sound didn’t really emerge until punk came along a few years later. Most of the lyrics were the sort of pseudo-anarchist rubbish we still hear today. But some were not.
Neo-nazi bands soon realised that they could peddle their racism and hatred of Jews through “white noise” to build cult followings amongst skinhead fans largely unaware that they would be amongst the first to go if the Third Reich came back again. Hate music has, in turn, been cynically exploited by veteran neo-nazis to skim off the profits to finance their racist movements.
Extremist attempts to build a mass youth movement on the back of White Noise ultimately always fail because the lyrics can only appeal to the racist minority it’s aimed at in the first place. But for over 20 years that minority has managed to sustain a neo-nazi music scene that seeks to legitimise street violence and racist attacks throughout Europe.
How and why they do it is covered in the well-researched papers contained in this remarkable book. Together they provided important data and analysis for all anti-racist campaigners. Eleven academics focus on national case studies across Europe as well as discussing particular topics such as censorship, the role of women in White Power music and the legacy of the late Ian Stuart Donaldson, who set up the Blood and Honour network and was major figure in the extreme-right music scene until his death in a car crash in 1993.
This is the second volume in the Mapping the Far Right series produced by Searchlight, the veteran anti-fascist magazine, and the Radicalism and New Media Research Group at Northampton University. Though written for the academic community this is no dry academic tome. The collection of papers provides up-to-date information for anyone interested in the neo-nazi music scene and everyone involved in the anti-fascist struggle.
It can be ordered from most booksellers or £8.50 post-free from: Searchlight, PO Box 1576, Ilford, IG5 OHE.
Posted by london communists at 5:43 AM

Strengthening the class struggle in Europe 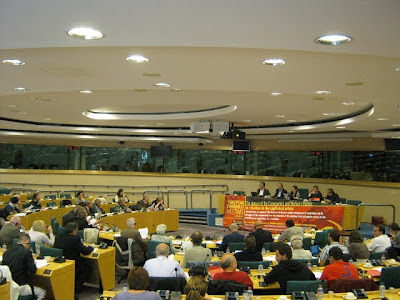 DELEGATIONS from European communist and workers’ parties met in Brussels at the beginning of October to discuss the building of common communist stance towards the bourgeois offensive during the current slump and to develop struggle for the overthrow of capitalism. Representatives of 36 parties, including the New Communist Party of Britain, took part in the conference held in the European Parliament in the Belgian capital on 1st and 2nd of October.
The conference was opened by Aleka Papariga, the general secretary of the Communist Party of Greece (KKE), who said that communists had to struggle to halt the attacks on the living standards of working people and chart the way forward for socialist advance. She warned of the danger of imperialist war pointing out that history had proved that when the capitalist states cannot manage the crisis and, above all the consequences, they resort to the use of arms. This was not, as the peaceniks and pacifists claim, to sell weapons but specifically because force is more effective for the redistribution of the markets in times of economic crisis.
NCP general secretary Andy Brooks represented the NCP at the conference and in his intervention he stressed the party’s support to all those struggling against imperialism and against the European Union.  The NCP leader called for the immediate and unconditional withdrawal of all British troops from Afghanistan and an end to the occupation of all countries by the imperialist powers.
He also called for support for Iran’s legitimate atomic energy research programme and called for solidarity with the Syrian government and the Syrian communist movements that are working for genuine reform that preserves Syria’s independence and social system.
The contributions and discussion largely revolved around the fight against the austerity programmes that have impoverished millions throughout Europe, the need to withdraw from the European Union and the struggle for peace. The common ground of all the parties was reflected by the unanimous adoption of four resolutions at the end of the final session. Two condemned the anti-communist campaign raging through parts of the European Union and imperialist attempts to legalise the secession of Kosovo. Another was “for the strengthening of the class struggle in Europe” while the fourth – “No to the imperialist war!” – denounced the intervention of the imperialists in the internal affairs of Syria and stressed that the solution to Syria’s problems was a matter entirely for its own people.

Posted by london communists at 2:02 PM


Labour leaders and US imperialism

Neil Harris continues his look at confidential reports from the US embassy in London published by Wikileaks that reveal the craven and often grovelling relationship between some Labour and trades union figures and the London representatives of US imperialism.

Posted by london communists at 7:33 AM