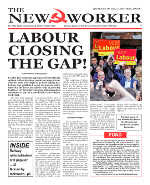 We should not be too surprised at the Chief Rabbi’s anti-Corbyn rant that was splashed across the Tory rags earlier in the week. Last July Ephraim Mirvis said he was “delighted to congratulate Boris Johnson, a longstanding friend and champion of the Jewish community, on becoming the next leader of the Conservative Party and our next Prime Minister”.
The Chief Rabbi’s loathing of Corbyn is undoubtedly down to his staunch support for Israel, which he says is “central to our faith”, and his Zionist beliefs, which he says are “a noble and integral part of Judaism”.
Although the Chief Rabbi didn’t openly call on people to vote Tory, he did say that a victory for Labour in the General Election will put the "very soul of our nation" at stake. So we can safely assume that he is, at least, sympathetic to the Conservative cause. What we cannot accept is the Chief Rabbi’s claim to speak for his own community in Britain.
The same can equally be said of Justin Welby, the head of the Church of England, who has backed Mirvis and says that “such an unprecedented statement at this time ought to alert us to the deep sense of insecurity and fear felt by many British Jews”.
Tony Greenstein, an anti-Zionist Jew who was drummed out of the Labour Party last year, says: “The campaign to show that the Labour Party is anti-Semitic and that Corbyn is an anti-Semite has always been evidence-free. It has been based on the interests of Britain’s Establishment and its voice the BBC. It is in the interests of the rich and powerful to demonstrate that Corbyn’s Labour is anti-Semitic. If they were honest they would say that their real reasons were the threat that Corbyn represents to their pockets.
“The Zionists if they were honest would say that what riles them most is that Corbyn has consistently supported the Palestinians, but of course they aren’t honest. Britain’s Chief Rabbis have a habit of supporting the Conservative Party dating back to Immanuel Jakobovitz’s support for Margaret Thatcher and even further back, but none have been this blatant.”
Communists need not worry too much about these sanctimonious hypocrites. They barely represent the communities they pretend to lead. All they do is provide more ammunition for those determined to keep the Tories in power for another few years.

Tony Blair showed his face again last weekend to tell us that a majority for Labour or the Conservatives would “pose a risk” to the country. The disgraced former Labour premier then went on grudgingly to concede that he would vote Labour on 12th December in an election that he said was the “weirdest in my lifetime". It certainly is.
The ruling class is openly and bitterly divided over the European Union (EU). Although some European links are preserved in Johnson’s withdrawal plan, the only party that can bring about the second referendum that the Remainers have been working for over the last three years is Jeremy Corbyn’s Labour Party.
The dominant section of the ruling class is determined to keep Britain inside the EU. They can live with Corbyn at the helm for a few years, providing he’s hamstrung by smaller Europhile parties such the Scottish nationalists to ensure that the ‘people’s vote’ that reverses the 2016 Leave vote takes place.
We can stop this but only by ensuring a massive vote for Labour that sweeps them back with a clear majority in parliament. Mass mobilisation can stop the Tories in their tracks and ensure that a new Labour government honours the historic decision to leave the EU.
We don’t want a Labour administration that’s been pawned to the Scottish nationalists and the Liberal Democrats. We don’t want a ‘people’s vote’ – we want a people’s government for social justice and an end to austerity!
Posted by london communists at 3:55 AM