Kick the Tories out! 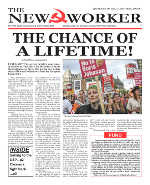 The December election gives Labour a golden opportunity to beat the Tories at their own game. If working people close ranks around Labour’s reformist platform the Tories can be defeated. But it will only happen if the Corbyn leadership stand firm on past pledges to restore free collective bargaining and trade union rights, and defend and expand the health service and educational provision.
Jeremy Corbyn, the Labour leader, rightly says that the choice at this election could not be clearer. “A Labour government will be on your side, while Boris Johnson’s Conservatives – who think they’re born to rule – will only look after the privileged few. Labour stands for the real change our country needs.”
The Tories will try to limit the campaign to the issue of Brexit. We must struggle to fend off insidious Remainer efforts to keep Britain inside the trap of the European Union (EU) via another referendum that they think they can manipulate to produce the result that they want.
We have to campaign to end austerity and ensure that the renationalisation of the railways and the utilities, which Labour say they will support, is just the first step in restoring the entire public sector that existed in this country until 1979. Above all, we must fight for peace, the scrapping of Trident and the withdrawal of all British troops abroad, including those in the occupied north of Ireland.
Posted by london communists at 6:58 AM