Chill the drills: save the world

THE MELTING of the Arctic ice is one of the clearest signals of global warming and scientists are now saying that there is nothing natural about the melting. They are confident that it is primarily due to pollution from the burning of fossil fuels.
Following the recent summers of record melting in the Arctic, the oil companies are eagerly awaiting permission to drill the first well in the National Wildlife Reserve while officials from the five Arctic nations hold urgent talks over the future of the Arctic.
The scramble for oil and other natural resources, which become more accessible as the ice is more rapidly thinning, intensified recently as Norway and Germany announced a new exploration partnership. And Russia has confirmed that its state-controlled oil companies would do business in the Arctic.

The stakes are high not only for the environment and the climate but also for world energy supplies.
For many years the oil companies have maintained that there are still large reserves left. BP’s Statistical Review of World Energy, published recently claims that there is still “enough ‘proven’ reserves to provide 40 years of consumption”.
Dr Colin Campbell, former chief geologist and vice-president of a list of major oil companies, including BP, Shell, Fina, Exxon and Chevron Texaco, admits that when he was the boss of an oil company he never told the truth: “It’s not part of the game,” he said.
But scientists are now warning that world oil supplies are set to run out even faster than expected and sooner than governments and oil companies are prepared to admit. Dr Campbell explains that the peak of regular oil – the cheap and easy to extract stuff – has already been passed in 2005.
There is still the more difficult to extract heavy oil, deep sea reserves, polar regions and liquid taken from gas, but the peak will come as early as 2011.
There are still natural gas fields in Alaska, Siberia and the Middle East that could provide fuel for about 20 years longer than the world’s oil reserves. But although it is cleaner than oil it is still a fossil fuel which emits CO2.
In recent years the considerable gap between demand and supply has narrowed and last year all but disappeared. If consumption begins to exceed supply by as little as 10 or even 15 per cent it could cripple the oi-dependent industrial countries. Yet BP still flatly denies this scenario.
None of them disagree that world oil demand is surging. The rapid development of India and China plus the West’s reliance on oil means that a lot more oil will have to come from somewhere.
The four countries with the biggest reported oil reserves are Saudi Arabia, Iran, Iraq and Kuwait but there are concerns about exactly how much they really have. In Kuwait last year a journalist found a document suggesting that the country’s real reserves were only half what was reported. Iran this year brought in oil rationing measures, the first major oil producing country to do so.
Over the past few years the biofuel industry has expanded enormously and the oil giants are leading the race to produce biofuel to replace the oil as it begins to run down.
Brazil, with an industry that only began in the 70s, has become the world’s second largest producer of biofuel crops and an agricultural superpower. The country was hard hit by the oil crisis and the then military government launched a subsidised drive to develop an alternative source of energy.
The authorities maintain that biofuel made from sugar cane, as opposed to corn, produces carbon monoxide emissions 90 per cent lower than petrol and that as sugar cane covers only five per cent of Brazil’s arable land and food prices are not affected.

Now the Brazilian government has announced a ten-year plan to slash rainforest destruction by 70 per cent, after new figures showed that the destruction was rising again after a period of slow down.
But environment minister Carlos Minc made it clear that this reduction depends on Brazil receiving enough funds from foreign governments to fight the loggers, pay for the protection of the world’s largest tropical rainforest and combat global warming.
Prominent scientists have recently predicted and computer models show that the North Pole could become ice-free as early as 2030, much sooner than the pace predicted by the United Nations’ Intergovernmental Panel on Climate Change.
The big argument the five nations are having is not how to protect the Arctic environment but about which nation can claim which parts of the Arctic, particularly areas with potentially huge reserves of oil and gas, and the shipping routesLast year Russia planted a titanium flag at the North Pole, pointing out that the Unites States had not signed the international treaty governing land claims. By hosting the five-nation meeting, Denmark is trying to move on from these issues.
The Arctic National Wildlife Refuge lies between the Brooks Range Mountains and the shores of the Beaufort Sea and it contains the greatest diversity of animal life of any conservation area in the circumpolar region.
But even though the IPCC has found that drilling for oil and gas would cause severe damage to the fragile infrastructure of the tundra, the mega oil corporations continue to concoct schemes to open up the region for drilling.
President Bush, who became President with the backing of the oil giant Exxon, is a great supporter of opening up the Arctic for exploitation. And a recent poll showed that a big majority of the American people do not want their cars fuelled by gasoline from Middle East countries that “support terrorists”.

Environmentalists are also calling for cutbacks in ethanol subsidies, tougher environmental regulation and a new appreciation of scientific data that may bring them into conflict with some of the policies that Obama, who supported ethanol subsidies in the Senate, is likely to put forward.
At the European Union negotiations taking place in Brussels to tackle the climate crisis, they agreed to have10 per cent of vehicle fuel sourced with renewable fuels by 2020, in spite of warnings by scientists.
Reports from the United Nations and the World Bank have warned that many biofuels produce more greenhouse emissions than petroleum-based fuel and displace farmlands from their role of providing food.
Claude Turmes, the European Parliament’s chief negotiator on the issue, said: “The 10 per cent agrifuels target has been seriously undermined”.
The United Nations Commission on Climate Change in Poznan was held from 1st to 12th December and halfway through the agenda the leading countries were still stalling over the plan they had promised.
As President-elect Barack Obama does not take office until 20th January, whether he will “chill the drills” in Alaska will not be known until he gets round to debating the issue.
The environmental lobby will continue to keep him under intense pressure to not only save the fragile structure of the Arctic but save the rest of us from the rising tides that would be the result faster melting of the ice.
Posted by london communists at 3:10 PM

The wind of history 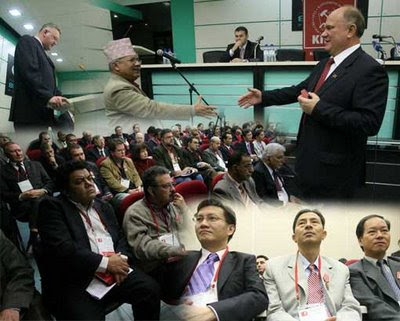 RUSSIA’S communists must be ready to take power. That was the message of Communist leader Gennady Zyuganov at the 13th Congress of the Communist Party of the Russian Federation (CPRF) in Moscow last weekend.
“The wind of history is blowing in our sails again ... At this time of crisis the world of imperialism is starting to die. We are standing on the threshold of political and social shifts,” Zyuganov said in a two-hour speech opening the Congress attended by delegates and observers from all over the Russian Federation, as well as 88 fraternal delegations from communist and progressive movements.
New Communist Party of Britain leader Andy Brooks and Richard Bos from the Central Committee represented the Party at the Congress and took part in a number of solidarity events held during the Congress.
The CPRF was established in 1993 when the ban on communists was lifted in Russia. It is now the biggest communist movement in the country with some 160,000 members and four million active supporters. It is the second biggest parliamentary party with 57 seats in the 450-strong Duma. Zyuganov won over 13 million votes in last March’s presidential election, which the communists say was rigged by Putin’s United Russia party.
Zyuganov, 64, has led the party from its foundation and he was re-elected on Sunday along with 105 members of the Central Committee, 75 of whom are under 40.
But the CPRF general secretary said the average age of the membership was a cause for concern. Most of the activists are well over 50. People under 30 barely make up five to seven per cent of the Party. “Given the average age of its members, the party will find it hard to be active in the event of a near inevitable deterioration of the situation in the country,” he warned.
The CPRF is the direct Russian successor of the old CPSU – but not that of the CPSU’s discredited politicians who led the Soviet Union to disaster in its final years. Zyuganov dismissed claims in the Russian media that his party was drifting towards social-democracy. “We categorically reject all these allegations. We believe that they are prompted either by incompetence or by wishful thinking. Social democracy is not our path,” he declared.
The CPRF harks back to the great victories of the Soviet Union under Lenin and Stalin. Though Zyuganov referred to the “abuses of power” and “tragic mistakes” during the political struggles of the 1930s he added: “We have no right to forget that it was in the 1930s that the powerful production and scientific base was laid which ensured the defeat of fascism and still forms the foundation of the country’s economy.”
Zyuganov condemned the corrupt Putin government whose only successes rested on windfall oil profits that were now evaporating and whose sole objective was to cling on to power at all costs. “The ruling class is an alliance of the oligarchy, the new bourgeoisie and the top bureaucrats, who between them own the bulk of the means of production and wield real power”, he said. The working class has shrunk numerically because of the policy of deindustrial-isation and the peasantry in the devastated Russian countryside fares even worse and it has become depoliticised and déclassé.
The communist party has drawn up a programme to restore the rights of working people and prevent the collapse of the Russian economy, including the renationalisation of mining, energy and other strategic sectors. But this, Zyuganov said, would be impossible to implement in the framework of the current system dominated by bureaucrats and oligarchs.
“At one time we believed that we could come to power by taking part in elections at various levels. Now, given massive election rigging and the severe pressure of the authorities on society, this is an unlikely scenario” he said while stressing that the CPRF would “use everything – parliamentary and non-parliamentary forms and methods of struggle – to weaken the ruling group and to expose its essence in the eyes of our compatriots”.

Posted by london communists at 5:44 AM