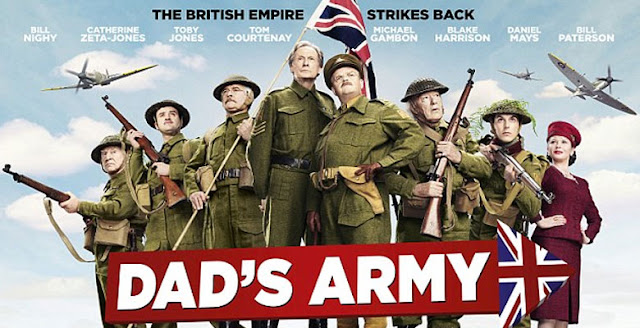 There has been a big fanfare over the remake of the famous comedy Dad’s Army with an all-star cast including Catherine Zeta Jones and Bill Nighy, as well cameo roles from surviving members of the original cast, namely Ian Lavender and Frank Williams as the Vicar.
Dads Army was a comedy about the Home Guard of the Second World War, which was originally called the Local Defence Volunteers. They were usually composed of men too old for active military service, hence the title Dad’s Army. The original series ran for about eight years and had its own spin off film version as well as a BBC Radio Four series. Much of the comedy centred on the pomposity of the local Home Guard commander Captain Mainwaring and the incompetence of the local guard Home Guard. The series give rise to many popular catchphrases such as “Don’t Panic!” and “You Stupid Boy”.
However despite the all-star cast and being talked up by the media the film turned out to be not as good as the original. Toby Jones as Captain Mainwaring lacked the presence of Arthur Lowe who played the part in the original series. The modern Mainwaring lacked the pomposity of the earlier one and was not as funny. Similarly Bill Nighy, stepping into the shoes of John Le Mesurier, was not quite right in the part of Wilson.
Many of the original characters were either downgraded in their roles or totally absent. ARP Warden Hodges (in the original series this part was played by Bill Pertwee), who was the perpetual rival of Mainwaring, deriding him as “Napoleon”, had only a few lines, as did the Vicar. The Verger, who was the assistant to the Vicar and accomplice of ARP Warden Hodges, was absent from the film, as was the upper-class Captain Square of the Eastgate Home Guard platoon.
The real star of film appeared to be Catherine Zeta Jones as a German spy, ”Agent Cobra”, who masquerades as a female journalist and tries to use her seductive charms to ferret out secrets – something that would have been considered too risqué in the original series.
The motivations of Ms Zeta Jones’s character were never made clear. Why did an Oxford graduate end up in German intelligence? Was she meant to be a Mosleyite, a Leaseite or a female William Joyce?
Watching the film it was very apparent that the original BBC series and the feature film made in the early 1970s were far superior to its present incarnation.
It is worth mentioning in passing that although the original series was full of laughs it also had a darker side. None of the characters were working class, they were all small businessman or management save for junior bank clerk Pike (the “stupid boy”) and the retired Private Godfrey. In one episode when a Soviet dignitary visit’s the town, a few anti-communist remarks are made. In another episode the platoon are sent to arrest in an IRA volunteer.
On balance the later film is worse because the black-marketeering spiv Private Walker is elevated to hero status whereas the original Walker was a self-centred cynic. This in my opinion reflects a shift to the Right in ideology, not that the original series was in any way progressive as pretended by some.
Posted by london communists at 9:21 AM No comments: