No to another EU vote!

The campaign to reverse the decision of the 2016 referendum on the European Union (EU) is now zeroing in on Labour Party conference in Liverpool in September.
Historically, the purpose of EU referendums is simply to get the public to endorse what has already been agreed by those who called them in the first place. If that fails the results are immediately questioned to back demands for reruns. This has been the chosen method of the Eurocracy to reverse decisions they didn’t like for many years.
The Europhiles in all the parliamentary parties, who see the ruling class’ interests best served by working hand-in-glove with Franco-German imperialism, began preparing the ground for another vote immediately after they lost the referendum in 2016.
The fifth column within the Labour Party is now working to mobilise the Europhiles within the Corbyn camp to join them in a concerted effort to commit Labour to a second referendum on EU membership. They say this is not a challenge to Jeremy Corbyn’s leadership and they claim that the ‘People’s Vote’ campaign now reflects the overwhelming wish of the electorate.
The Blairite backbenchers, who have made repeated attempts to unseat the Labour leader, began bleating for a second vote immediately after the referendum result was declared. And whilst the Corbyn leadership is committed to honouring the 2016 decision to leave the EU there are many within his own camp ready to sell out to the Europhiles.
Last week Labour’s shadow Brexit secretary, Sir Keir Starmer, said that a second referendum was possible, declaring that “all options should be on the table”. John McDonnell, Corbyn’s number two, was disturbingly ambiguous when he told the BBC that: “It is not Labour party policy to have another referendum. We respect the past referendum, But we recognise that, when the government comes forward with its proposals – if it does, I’m worried we might be in a no deal situation – but when the government comes forward with its proposals, parliament will decide the next step. So we’re not taking any options off the table when that debate happens.”
The Europhiles can count on social-democrats of all persuasions who believe that “Another Europe is Possible” and peddle the nonsense spread by left social-democrats, and revisionist circles that still pose as communists in some parts of Europe, who argue that the EU can be reformed to serve the interests of working people. They can also rely on the support of the dinosaurs in the trade union movement who claim that the anti−working class ‘directives’ and ‘rulings’ can be reversed.
For years the Blairites and the majority of the leaders of our unions have elevated the EU as an instrument for social progress and economic advance whilst turning a blind eye the bitter experience of the millions of unemployed workers forced onto the breadline in Greece, Spain, Portugal and Italy by the austerity regime that Franco-German imperialism has imposed on the rest of Europe. They ignore the poverty that has forced millions of Poles and other workers from eastern Europe to seek work in Britain, France and Germany, and they say little about the anti-union legislation that is the backbone of the EU’s ‘Social Chapter’.
They say that the EU is becoming more representative through the authority of the European Parliament and establishment of regional autonomy. But the EU with its toothless parliament, ruritanian regional governments and farcical referendums that only count when the vote agrees with what has already been decided by the powers that be, hasn’t been reformed. Nor can it ever be under the Treaty of Rome. We voted to leave the EU in 2016. That’s what we must do.
Posted by london communists at 7:30 AM No comments:

US history: The Great Textile Strike of 1934

The White Working Class – What Everyone Needs to Know 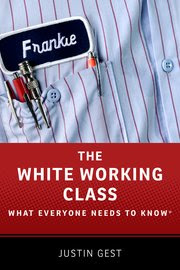 This book by Justin Gest is an academic study into the plight of the white working-class  in Britain and the USA. There is renewed interest in this group, which is interesting because 20 years or so ago we were told that the working class would soon cease to exist. A narrative espoused by the Blairite Extreme Centre; a grouping more extreme than centrist. Recent studies have focused on derogatory characterisations such as Chavs, Pikies and White Trash; although this study avoids such negative terminology.
Chapter one concentrates on definitions of both white and working class. Being white is simply a reference to those of us of European lineage and the author goes into the history of how this terminology developed from the 18th century onwards. Guest views class in terms of social and educational factors, therefore missing the point – many call centre operatives with limited job security have degrees but earn less and have worse terms and conditions than say a docker in the 1960s or 1970s.
To Marxists, class is about relationship to the means of production; the working class are those who sell their labour, namely wage earners. This definition may become blurred in the case of, for example, heart surgeons or film directors, but there is little to distinguish call-centre workers from the factory workers. Class is not some cultural lifestyle choice but about pure hard economics.
Gest covers issues of mass immigration and the decline of manufacturing industry in both countries. The book is full of the results of surveys on the attitudes of white workers towards immigration and welfare. Some of these surveys, although they show the subject group sometimes taking a tougher stance, are not at huge variance with the rest of the population.
Working-class people sometimes take a harsher view of benefit claimants, namely those who do not work., and terms such as Chav and Pikey are just as likely to be used as terms of abuse between working class people than at them. Such attitudes as well as being fuelled by tabloids may well have their origins in 19th Century values such as thrift, punctuality, hard work and respectability.
The book discusses the impact of mass immigration of poorer communities. Gest correctly points out that historically, many migrants in low-skilled employment are often over qualified for the jobs they are initially forced to take. This means that they are sometimes in a position to both undercut the native poor and have better chances of upwards mobility. This shows the need for trade union organisation amongst all workers. He also makes the valid point about working-class people being made to feel guilt for the past actions of our rulers, such as the slave trade and imperialism.
Gest discusses how the far-right on both sides of the Atlantic have managed to tap into some elements of working angst. Donald Trump proved successful in parts of the so-called ‘rush belt’ of the USA, whilst in Britain the former EDL [English Defence League] leader and self-styled ‘journalist’ Tommy Robinson (real name Stephen Yaxley-Lennon) poses as some kind of working-class hero. It should be pointed out that Mr Yaxley-Lennon is in fact a small businessman who owns a tanning salon, a business that will only attract custom from white people.
Research perhaps needs to be done into what attracts some working-class people to the far-right. Many of these people are essentially small ‘c’ conservatives who believe in an ideology that never existed for their benefit. Unfortunately, when it ceases to work for them, rather than rejecting the ideology they demand more of it and, as a result, moving farther to the right. This is not helped if the alternative is a Labour Party dominated by the Extreme Centre.
In the section Why do working class people vote against their interests?, he raises the question of why some working-class people vote for reactionary parties. Although it may be against their interest to vote for Donald Trump, UKIP or the Tory party there is that crucial area where the many on the left missed a trick. Yes…Brexit. By campaigning for a Remain vote some of the left pushed many working-class voters into the reactionary camp. Labour effectively finished off UKIP in 2017 however, by agreeing to honour the referendum result. Remainiacs on both the right and left of the Labour Party are handing the far-right an opportunity on a plate by calling for a second referendum.
Gest poses the question: “Was the White Working class ever on Top?” This is a question only Marxist-Leninists can answer. The Second World War saw the victory of the Red Army over fascism, stronger communist parties and a powerful trade union movement. The ruling class in the developed world lived with a degree of fear, hence the need to give concessions. In Britain we saw the NHS, The Welfare State, Social housing and various opportunities for self-improvement.
Since the 1980s these gains have been undermined; the process continued during the Blair–Brown era when neo-liberalism further eroded the welfare state, education and social housing. Meanwhile the far-right have managed to tap into some of this frustration.
The ruling class is not afraid of the far-right. One of the first publications to support the so-called Football Lads Alliance (FLA) was the rather well-heeled Spectator. The left now has an opportunity to turn the tide and win over or at least neutralise those who may have been tempted by reactionary politics. Lets just hope that Corbyn can see off the fifth column of Zionists and Remainiacs.
Unfortunately Gest advocates a rather worn out Blairite narrative, which includes calls for so-called meritocracy combined with suggestions for improved education. At no point does he suggest that capitalism might be the problem. He rejects definitions of Left and Right, but instead politics should be viewed in terms of Open and Closed. Sounds a bit like the Third Way to me.
Posted by london communists at 3:43 AM No comments: