Pages from the Past 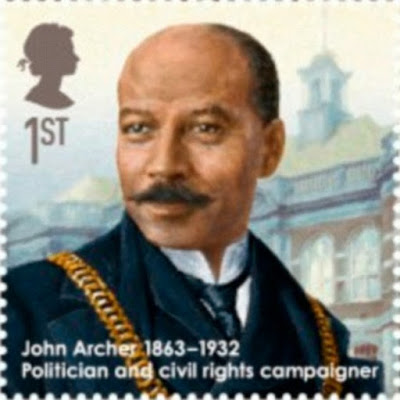 John Archer: Battersea’s Black Progressive and Labour Activist 1863–1932 by Sean Creighton.
London: Historical & Social Action Publications, 2014, pp48. ISBN 978-09927299-1-2.
Copies available from HSAP, 6 Oakhill Road, London SW16 5RG. £4.00 plus 50p P&P.
The author can be contacted at sean.creighton1947@btinternet.com for details of his other publications, which include a history of the Co-operative movement in neighbouring Lambeth.

Sometimes known as “South Chelsea” on account of refugees fleeing the high property prices in the ultra-rich borough just across the River Thames taking up residency, the London Borough of Battersea, now part of Wandsworth, has a surprisingly interesting labour history.
It was in Battersea that the first working man to become a cabinet minister, John Burns, was elected as a Labour MP in 1892. He was a member of the Marxist Social Democratic Federation which, although often criticised for its sectarianism, worked with the powerful Trades and Labour Council and with some radical Liberals in a sometimes effective Progressive Alliance that played an important role in municipal politics. Amongst its achievements the Alliance established the first direct labour department to build council houses. These experiments in municipal socialism were of high quality, earning the borough the title of a “municipal mecca”. Later it was the borough that elected Shapurji Saklatvala as a Communist MP in 1922 with Labour Party support, and again in 1924 with Labour Party opposition.
It is against this background that the biography of John Archer is set out in this pamphlet. Born “in a little obscure village in England probably never heard of until now – the city of Liverpool,” as he put it, the son of a black ship steward and an Irish mother, he arrived in London in the early 1890s. Details of his early career are unclear but by 1907 we find him running a photographer’s business.
His earliest political career centred round the Pan-African movement, he attended its first conference held in London in 1900, which set up a short-lived Pan-African Association. Although few details of his career in anti-colonial politics are known he also attended the 1919 Paris Pan-African Congress.
There was strong opposition in Battersea to the Boer War, including naming a street after a Boer general, but we are not told views Archer held. For someone deeply concerned about the well-being of Africans, the choice of Queen Victoria’s Empire or the Boer Republics would not have been an easy one.
It is not easy to pigeon-hole his political views. A life-long devoted Catholic, he publicly denounced Spiritualism and opposed vivisection. He was one of Saklatvala’s original supporters when he first stood for Parliament – but when the Labour Party banned Communists from joining the Labour Party he was the election agent for the right-wing Labour candidate who ended Saklatvala’s parliamentary career in the 1929 General election.
First elected in 1906, he had an on-off career on the local council and Board of Guardians from 1906 until his death, both as an elected councillor and as an Alderman. He was not the first British black person to be elected to municipal or parliamentary office, but he was the best known. On the council he focused on the provision of swimming baths, improving both the wages of municipal workers and the Poor Law.
His main claim to fame, which earned him a postage stamp and an English Heritage plaque in 2013 (and widespread contemporary press coverage), was a one-year term as Mayor that begun in November 1913.
The latter part of his mayoralty was dominated by the First World War. Archer clearly supported strongly the war effort, organised a recruitment meeting in September 1914. This fact goes unmentioned in the text but Creighton reproduces the letter calling the meeting, which makes it clear that he considered Germany was a threat to “our existence as a Nation” on which “depends upon the success of the efforts to reinforce our Standing Army”. In a 1918 council debate about war bonuses for council workers in the services he said “he would never have gone to France but added that “there were men who thought it was their duty to go”.
Sometimes the author unwisely attempts to fill the gaps in the surviving evidence by too much speculation about whom he met and what he might have thought. The bibliography does not include any citations from the Catholic press or the photographic trade press, which could possibly throw further light his life and business career. But these are minor blemishes in an otherwise interesting story.
Posted by london communists at 2:29 PM No comments:

THE APRIL edition of Revolutionary Democracy has just arrived from New Delhi. As always its 224 pages contain a wide range of interesting, if at times controversial, matter.
As is to be expected there is a great deal on contemporary Indian politics and society including an interesting article on the widespread continuing discrimination in education against members of the Dalit caste, who were called by the British. This is followed by pieces on the serious economic problems facing India and others on the he use of the Army and colonial-era laws to suppress dissent. On a more encouraging note there is an account of cement workers in the state of Chhattisgarh gaining a substantial wage rise and improved conditions, but only after a twenty-five year struggle.
Revolutionary Democracy generally takes a dim view of the Communist Party of India but it contains a generous tribute to AB Bardhan, general secretary of the CPI between 1996 and 2012 who died this January aged 90.
The journal is closely associated with the International Conference of Marxist-Leninist Parties and Organisations. This issue includes a wide ranging survey of the state of the world from this organisation, which is strongly influenced by the theories of Enver Hoxha. It also carries its views on the current situation in Venezuela which blame the December electoral defeat on the “Reformist” policies” of the governments of Chavez and Maduros.
A short but useful article outlines the complex history of left-wing parties in Bangladesh from the formation of the Communist Party of East Pakistan in 1956 to date. This is a story of the party forming what appear to be strange alliances with bourgeois parties and many violent splits, including the Sino-Soviet split. The author makes the depressing conclusion that “the left as a political forces has long been ineffective in Bangladesh”.
Another historical piece, partly based on the author’s own memories as a student, is on the events of March 1956 in the capital of the Georgian SSR. The 3rd anniversary of Stalin’s death took place shortly after Khrushchev’s “Secret Speech” attacking the work of Stalin. In Tbilisi thousands gathered to pay tribute to the departed general secretary, but later protests against Khrushchev’s smears were crushed by the army, resulting in an uncertain number of deaths, but numbering at least 150.
The most substantial piece is a translation of a 1932 Soviet booklet on Trotsky’s views on imperialism in which Trotsky is roundly criticised for his theory, derived from the right-wing German Social democrat Karl Kautsky, that with the lowering of the flag of the imperialist power does not mean the end of a colonial relationship between the imperialist power and the oppressed country. Eighty-four years on these points are still valid. Another theoretical piece deals with the wide influence the various editions of the standard Soviet Textbook on Political Economy had in the USSR and India.
As in previous issues there are materials from the Soviet archives on relations between the CPSU and the Communist Party of India. The present issue prints informative documents summarising the differing views of various groups within the CPI in the late 1940s drawn up prior to talks held in 1951.
The issue concludes with an interesting discussion of the work of the progressive artist Chittaprosad Bhattacharya (1915-78), the article is illustrated with many small examples of his work, fewer but larger images would have done better justice to his work.
It would be helpful if the editors provided a little more background and some explanation of some of the specifically Indian terminology for readers beyond the sub-continent, but these are minor criticisms, which should not deter purchasers.
Posted by london communists at 3:22 AM No comments: