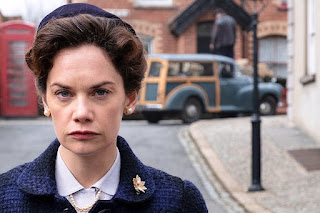 In this Tuesday night espionage thriller on BBC1, the actress Ruth Wilson plays her grandmother Alison Wilson. The three-part series centres around the theme of deception, which goes hand in hand with espionage. Alison Wilson meets her husband Alec Wilson, an espionage agent, during the Second World War and they soon marry. The marriage lasts until Alec dies from a heart attack. Shortly after his death a mysterious woman appears announcing herself as Wilson’s wife. The question the programme seems to be asking is how well do we know those closest to us?
The same question seems to be asked a lot on the BBC at the moment, with a similar plot line in EastEnders.
The drama starts in 1963 with Alec Wilson’s death. The programme makers create an atmosphere of order; women are shown working in a typing pool (something that younger readers may need to Google), sat in orderly rows. Streets appear to be clean with little traffic.  Order starts to break down when the other Mrs Wilson appears on the doorstep of their suburban home. Alison Wilson then goes through her husbands’ effects and we are taken back to 1940; suddenly everything is made to look untidy.
At this stage I am expecting readers to be saying: “But it would be untidy…there was a bloody war on.” The nature of the thriller genre, however, is about the idea of the disorder and concluding with order being restored. The element of disorder being the idea of Alison Wilson’s world being turned upside down as a result of her not knowing what is happening.  Order can only be restored when she finds out what the hell is going on. Suffice it to say, the programme continually jumps between the order of the 1960s and the disorder of the 1940s.  Two period dramas for the price of one.
In the 1940s a fifty-something Alec Wilson, played by Ian Glen, seduces the future Mrs Wilson, a typist in her early twenties. In one scene Alec Wilson tells his now wife about plans for the battle of El Alamein and that he is to be arrested in what he says is some kind of stunt. At this point I immediately smelt a rat. No spy would tell even his wife about something that secretive. After a period of time away, Alec Wilson tells his wife that he is going to be working undercover in a series of menial jobs and will have to pretend to be a disgraced officer.
What I found infuriating is we are not told what the alleged misdemeanour was; although that is the nature of thrillers. Occasional shots of rosary beads remind us that Alec Wilson was a devout Catholic, who presumably would have opposed the concept of divorce.
Is this drama simply about a worldly older man seducing an innocent younger woman, or something more sinister and subsequently more interesting? The mystery should unravel in the next two episodes.
We are left with an element of suspense when Alison Wilson meets an Indian acquaintance of her husband who tells her what a good man he was. With this scene all kinds of ideas came to mind. To put the cat amongst the pigeons a mysterious woman called Dorothy, played by Keeley Hawes (also not looking like she has aged much), appears in both time periods. Could she hold the secret? As a result, this could be the making of a good television drama.
Posted by london communists at 4:06 AM