A window to the Tudor world 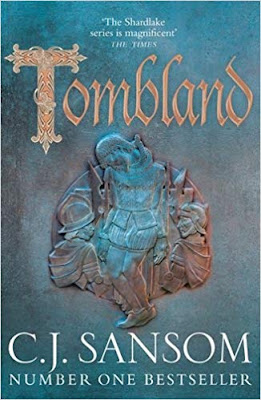 Readers in East Anglia may be familiar with Tombland as an area of central Norwich. But it is also the title of the seventh novel featuring the hunchbacked Tudor sleuth Matthew Shardlake.  Shardlake, a lawyer, is well connected and sees society from the top In previous novels he has met Thomas Cromwell, Thomas Cranmer, Catherine Parr and Henry VIII.
Despite this he has a sympathy for the oppressed having used his legal skills in the Court of Requests to represent tenant farmers in disputes with land owners.
Arguably there was more contact between the rich and the poor in Tudor times than today. Members of different social classes would rub shoulders whilst travelling as well as in inns and alehouses; and wealthy landowners would often have direct contact with their tenants.  The super-rich of today are more likely to travel by private jet and not even use our overcrowded rail system which few of us can afford and I doubt that the CEO of Amazon knows the names of any of his warehouse staff.
Through Matthew the author shows the many sides of Tudor life.  On the one hand we are brought into the politics of the Tudor court; with its numerous factions vying for influence.  Whilst in his crime solving adventures, in a period three hundred years before the police force, we see the underside of Tudor England.  Sansome’s vivid descriptions bring the era to life, which is arcuately researched and I would recommend his novels to anyone with an interest in the period.  The Maids Head Inn, where Shardlake and his party stay still stands in Norwich today.  I shall take this opportunity to inform readers that a double room costs £145 per night.
Tombland is set in the reign of boy king Edward VI; where England is effectively ruled by his uncle Edward Seymour. The country is beset with problems of inflation, caused by the devaluation of coinage, a problem that began in the reign of Henry VIII.  Many landowners are enclosing common land and using it for sheep grazing which resulted in many tenant farmers forced off the land. This did not take place without protest. Those who drone on about the so-called crimes of Stalinism should perhaps look closer to home if they are concerned about past injustice. In the Soviet Union land was taken into public ownership and mechanised; fewer farm workers were needed and could be released to work in factories in the cities.  In Tudor England those forced off the land faced destitution.
In his legal work in Norwich Shardlake finds himself in the middle of Kett’s Rebellion, named after Robert Kett of Wymondham, a local landowner who led the revolt.  Local tenant farmers set up a camp close to the city in opposition to enclosure; they believed the Lord Protector Edward Seymour would halt the process. Their hopes were tragically dashed.
These protests, accompanied by similar events in the West Country, Essex and Kent were the largest uprisings since the Peasants Revolt of 1381 and prior to the English Civil War. The uprisings in Tudor England are often overlooked by some historians who try to present the period as one of relative tranquillity between the more violent Medieval Period and the seventeenth century. As a result, the Tudor Period is often described as ‘Merry England’.  Tombland, with portrayal of rural class war, shows a very different side of the period and it is anything other than merry.

Posted by london communists at 1:36 PM