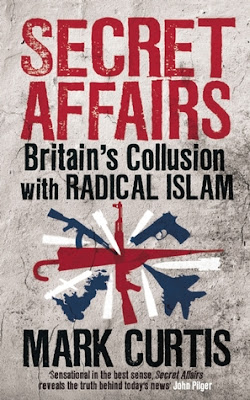 In Secret Affairs Mark Curtis gives an insight into the shadowy relationship between British imperialism and what he calls ‘Radical Islam’. Radical Islam is itself a point of contention; the term Radical is usually associated with socially progressive movements of the left. The movements described in this book are anything but progressive. Based on older interpretations of Islam, they uphold reactionary social systems and oppose social change.
Curtis points out that these movements offer no alternative to the neo-liberal policies pursued by some of the regimes they claim to oppose. For this reason, they have acted as convenient allies for imperialism in the Middle East and beyond.
The two main sponsors of Islamic terrorism today are Pakistan and Saudi Arabia.
And the story really begins after the Second World War, when Britain needed allies in the Middle East to undermine secular nationalist and communist movements who were waging a struggle against imperialism and demanding social progress. Curtis provides a detailed account of how Islamic movements were used in Iran against the government of Mosaddeq in Iran, Nasser in Egypt and Sukarno in Indonesia; as well as propping up the Jordanian monarchy. But on Afghanistan the author reverts to imperialist thinking when talking about the Soviet “occupation” of that country.
In 1978 a popular uprising led by the Peoples Democratic Party of Afghanistan established a socialist-oriented government. Right from the start the people’s government faced campaigns of terror from drug-crazed jihadists backed by British and US Imperialism.  In 1979, after repeated requests, the Soviet Union sent military aid.
The people’s government stood up to Islamist terror and actually outlasted the Soviet Union; surviving until 1992, when the jihadists over-ran Kabul.
The book reminds us that the terrorists planted a bomb in Kabul airport killing a number of school children; adding that Margaret Thatcher expressed support for this incident.
Curtis explains how the organisations that carried out terrorist attacks in Britain, such as the 7/7 Bombings in 2005, originated in the Afghan conflict. Saudi Arabia and Pakistan pumped large sums of money into Islamic organisations in Europe in order to recruit foot soldiers for their reactionary crusade, with the backing of the British Government. Years later these same movements commit atrocities on our streets and threaten community cohesion.
Later in the book Curtis covers events such as the conflict in former Yugoslavia, campaigns against Colonel Gaddafi in Libya and Saddam Hussein in Iraq. This well researched book contains an array of details listing various contacts between senior civil servants, army officers and diplomats with members of Islamist groups. He points out that the reason why Islamic terror suspects are often subject to illegal rendition and imprisoned in camps such as Guantanamo Bay is because any public trial might be somewhat embarrassing.  One can only speculate but this might explain why Osama Bin Laden was assassinated rather than brought to trial.
This book covers a number of themes. One is the underhand nature of British foreign policy – often supporting both sides in a conflict. This was the case with both the Arab–Israeli War of 1948 and the Iran–Iraq War of the 1980s. Curtis believes that British Government policy has been fuelled by a form of short termism, whereby organisations or even whole countries can be utilised and then simply dropped. This policy continues to this day, even to the extent of tolerating more extreme opponents of the Saudi regime, based on the policy that one day they may be that country’s policy makers. Another is the role of the financial sector in depositing funds for terrorist groups. This became especially significant after the oil price rise of 1973. when successive government encouraged the Saudis to deposit their oil wealth in the British banks. As a result, we have seen the creation of what he describes as ‘Londonistan’, where our capital has been used as a safe haven for those plotting terrorist attacks elsewhere.
Despite incorrect use of terminology, Curtis demolishes the concept of the ‘War on Terror’. He points out that if the British and US governments really wanted to oppose terrorism then they would have attacked Saudi Arabia or Pakistan, not Iraq. The origins of Islamic terror lie in British imperialism’s use of reactionary Islam as a strategic policy tool since the Second World War. This book is a useful source of reference against those who attack Jeremy Corbyn’s alleged terrorist links. We should be able to throw arguments back in their faces and politely inform them that it is the actions of our own ruling class that threaten our safety and security.
Posted by london communists at 3:22 AM