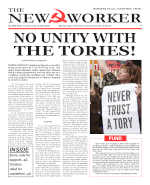 None of us should be surprised at Sir Keir Starmer’s victory in the Labour Party leadership contest. The darling of the Blairites was backed to the hilt by the right-wing Labour factions that operate within the party and the trade union movement. But his convincing first-round victory over the supposed heir to the Corbyn mantle showed that his support went far beyond that of the Labour’s traditional right-wing constituency.
It’s also true that the number of abstentions outweighed those that actually voted for the ambitious lawyer turned politician who now leads the Labour Party. But the fact that Starmer bagged 275,780 votes in the poll – more than that of the two other hopefuls combined – shows that tens of thousands of Labour members who had previously backed Jeremy Corbyn had been swayed to vote for the “unity” candidate this time round.
Some are now, once again, calling for the establishment of a new socialist party to challenge Labour. None of them can explain why all previous attempts to do so have failed dismally. Others, ready to rebuild the left inside Labour, have not looked frankly at their own record over the last five years and are, therefore, doomed to repeat the same mistakes over and over again.
Although Corbyn’s campaigns sparked off a surge of support that has made the Labour Party one of the largest political parties in Europe, they failed to build a mass left social-democratic base within it. His core support in parliament went little beyond the old Bennite Socialist Campaign Group. The tens of thousands who rallied to Corbyn’s banner showed no interest in the Labour Representation Committee (LRC) that Corbyn led. Although there was some mass support for Momentum when it was founded, that rapidly evaporated when it became clear that it was just an ego-trip for a tiny clique that revolved around one of Corbyn’s useless advisers.
Starmer is a good communicator whose 10-point programme embraced much of Corbyn’s old agenda. This includes support for the common ownership of rail, mail, energy and water, as well as an end to outsourcing in the NHS, local government and justice system.
He also pledged to “work shoulder to shoulder with trade unions to stand up for working people, tackle insecure work and low pay and repeal the Trade Union Act,” although he’s avoided any commitment to reverse the tranche of anti-union laws passed by successive Tory governments since 1979 and to restore free collective bargaining in full.
Many can easily be forgiven for thinking that Starmer’s agenda is, indeed, a continuation of the Corbyn project. But it isn’t.
If Starmer talks about “common ownership” of the railways and the utilities it’s because it’s popular on the street and there’s now a bourgeois consensus in favour of restoring part of the old public sector. No-one is going to argue about more support for the health service these days whilst even some sections of the ruling class are resigned to accepting a modest increase in income tax at the highest levels.
Although we get the usual platitudes on climate change, peace and human rights, Starmer’s camp is totally committed to retaining the colossally expensive Trident nuclear missile system to maintain Britain’s bogus independent nuclear deterrent, which in practice is just an appendage of US imperialism’s nuclear arsenal.
Corbyn won the Labour leadership contest in 2015 with mass support. It showed Labour was still a potentially strong weapon for our class. That is not to confuse the Labour Party with a revolutionary party or imagine that we can gain a workers’ state through parliamentary elections.
A Labour government, with the yet unbroken links with the trade unions, offers the best option for the working class in the era of bourgeois parliamentary democracy. Our strategy is for working class unity, and our campaigns are focused on defeating the right-wing within the movement and strengthening the left and progressive forces within the Labour Party and the unions. We support those in the Labour Party fighting for left policies. It is part of our struggle for a democratic Labour Party.
Posted by london communists at 2:03 AM