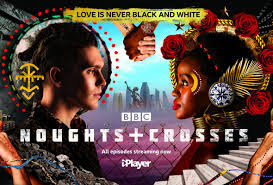 When I watched this programme I thought – What are the BBC playing at?
The premise behind Noughts and Crosses promotes reactionary identity politics advocated by the far-right and fake left alike. It’s an adaptation of the first book in a series of novels written by Malorie Blackman set in an alternative reality where an African Empire conquers most of Europe, as well as presumably the Muslim states of North Africa, in the 13th century.
What is odd is how similar things are in this world that diverged from ours 700 years ago. The London skyline is still dominated by high-rise buildings, smart phones and cars are in popular use, and even clothing looks very similar to our own; whilst members of the African elite use titles such Prime Minister and Home Secretary, products of 18th-century Britain.
Alternative history, even as an allegory, has to be feasible. European powers came to dominate much of the world from the 16th Century for a reason. Namely the possession of military and maritime technology, raw materials such as iron ore and coal, and the geographic proximity to maritime trade routes. The division of Europe into distinct nation states created military competition for colonies and control of markets. These factors culminated in the development of capitalism and imperialism.
Europe and Asia have been ahead of Africa and the Americas for most of human history  – the reason is geographic. Eurasia constitutes a single land mass covering a large area of latitude and a relatively small area of longitude, enabling ideas and technological innovation to spread from east and west and back. The obvious example being the Silk Road – a series of connections spanning Eurasia. Areas outside this line of latitude were at a disadvantage – giving Eurasia a competitive advantage over Africa and the Americas. An African Empire conquering Europe would have been highly improbable.
In the series, society is divided into Crosses, the African elite, and Noughts, the oppressed whites. A focal point of the drama is the relationship between Callum, a Nought (played by Jack Rowan) and Sephy (played by Masali Baduza), a Cross. Callum has just been accepted at an elite military academy, the preserve of the Cross elite, whilst Sephy’s friendship with Callum causes hostility from her Cross friends.
In a drama based around role reversal, Callum’s mother Maggie (played by Helen Baxendale) plays a white version of Mammy from Gone with the Wind.
Opposition is organised by the Liberation Militia (LM), with Callum’s brother a member leading to divided loyalties.
The series and original novel have parallels with Apartheid South Africa.
If I lived in this alternative reality my sympathies would be with the LM but this is where it ends. The first episode starts with a map of Europe turning darker as a result of an African invasion, which can easily be interpreted as being swamped by some kind of migrant invasion.
I can hear the likes of Tommy Robinson saying that if we don’t watch out England, or ‘Albion’ as it is referred to in the series, will end up like this. The rallying cry of his ilk for decades has been – we must preserve our identity or else. Meanwhile, the lives of the Noughts, living in council flats and working under precarious conditions of employment, are not much different from many white working-class people today.
In a court scene a member of the LM talks of Noughts being continuously stopped by the police, wrongly arrested and generally persecuted; an obvious reference to the treatment of black people today and a real problem for that community. But we don’t need a whole series to make the point. Even EastEnders is able to raise the issue by simply including a story about a young black man being continually stopped by the police.
The idea of organised groups of white people defending their cultural identity against an alien oppressor is the rallying cry of the likes of the far-right these days.
Reversing race roles to show what it’s like to be in some-one else’s shoes has been done before. Back in 1965 the BBC caused a storm with a Wednesday Play called Fable that depicted whites being oppressed by a brutal, black-dominated authoritarian regime in Britain. Although intended to show the British audience what life was like in racist South Africa, it actually helped to reinforce racist ideas amongst some sections of the viewing public. Hopefully this won’t happen with this new BBC drama.
Posted by london communists at 12:17 PM