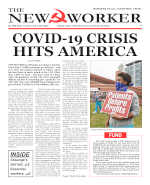 Jeremy Corbyn took part in his final Prime Minister’s Questions as Labour leader last week. Boris Johnson paid tribute to Corbyn’s “sincerity and determination to build a better society”, whilst the Labour leader warned the Prime Minister not to deliver his political obituary because he will not stop campaigning for social justice in the future.
“My voice will not be stilled,” Corbyn said. “I will be around. I will be campaigning. I will be arguing and demanding justice for the people of this country and indeed the rest of the world.”
Whether that voice will still be heard on Labour’s front-bench largely depends on who will take his place. Corbyn says he’d like to be Shadow Foreign Secretary. That might be too much to swallow for Sir Keir Starmer, the bookies’ favourite to become the next Labour leader.
Of the three contenders, Starmer, a lawyer turned politician, is the darling of the Labour Remainers who, even now, still dream of reversing Brexit. Rebecca Long-Bailey poses as Corbyn’s successor whilst Lisa Nandy’s problem is that she is largely appealing to the same constituency within the Labour Party that Starmer has already sewn up.
Labour’s voice has, so far, been overshadowed by the coronavirus crisis. Although Labour and the unions have clearly been involved in informal discussions with the Government at a national level over the emergency, the new Labour leadership now needs to reflect the voice of organised labour on the street as well as parliament in the months to come.

The news that Russia is sending medical assistance to the USA reflects the nature of the coronavirus plague that has plunged the world into a health crisis not seen since the devastating Spanish Flu pandemic that swept the world shortly after the end of the First World War.
During the Cold War the USA and the satellite states that their lackeys called the “free world” exploited disease and famine in the Third World to trumpet the supposed superiority of the capitalist system. They sent their ‘aid’ to maintain neo-colonialist control of large parts of Asia, Africa and Latin America for the benefit of trans-national corporations of the imperialist heartlands.
In those days the US-led global imperialist bloc tried to stifle the national liberation movements that had broken the chains of the old European colonial systems after the Second World War. The imperialists spent billions on bogus aid projects to counter the Soviet Union and the resurgent communist movements that had come to power in eastern Europe and parts of the Third World, in propaganda campaigns to win the ‘hearts and minds’ of the people the imperialists intended to oppress and plunder.
Although the wild dreams of the ‘Project for the New American Century’ and the ‘new world order’ that followed the collapse of the Soviet Union were shattered on the streets of Baghdad and the Syrian plains, the imperialists still think they can do what they like with impunity.
Trump and his cronies initially did little or nothing to tackle the coronavirus plague that has claimed thousands of American lives. They were only interested in exploiting the crisis to tighten the screws of their economic blockades of Democratic Korea, Cuba, Syria, Venezuela and the Islamic Republic of Iran. They even tried to stop their NATO allies accepting Chinese medical assistance. Now Trump, under public pressure to be seen doing something, is forced to accept Russian aid.
People’s China, Cuba and Vietnam have beaten back the virus, whilst Democratic Korea has no reported cases of infection due to the emergency measures taken by the people’s government to keep the virus out of the country. Whilst the USA descends into chaos, Chinese and Cuban medical teams are helping to combat the virus all over the world. If nothing else, this clearly demonstrates the superiority of the socialist system.
Posted by london communists at 12:26 PM