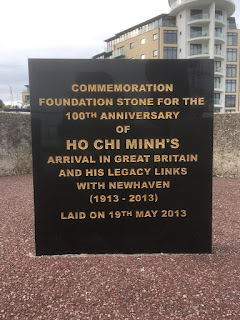 By New Worker correspondent
Ho Chi Minh is revered in Vietnam as the father of the nation whose communist-led guerrilla army drove the French and Japanese imperialists out, and defeated the American invaders in a war that ended in 1975 with a people’s government and a united country.
Ho Chi Minh was born in 1890 in a country whose feudal rulers had been reduced to puppets of the French who were speedily colonising the whole of Indo-China. He died in 1969 never seeing the ultimate victory, but his entire life was dedicated to the communist movement and the liberation of Vietnam.
In Britain communists were at the helm of the Vietnamese solidarity movements that took the anti-imperialist struggle to the streets of London during the heady days of the Vietnam war. In those days, few of us knew that ‘Uncle Ho’ had actually worked in Britain in his early 20s when he travelled the world working as a ship’s cook or a hotel chef.
A blue Ho Chi Minh plaque now marks the site of the Carlton Hotel in London’s West End where the leader of the Vietnamese revolution worked as an assistant cook before the First World War. A more imposing monument stands on the south coast however, to remember the days when Ho Chi Minh worked as a pastry chef on the Newhaven–Dieppe ferry in 1913.
Some eight miles east of Brighton, Newhaven retains its small town charm. Although the port has declined, the marina and the Dieppe ferry are still holding their own. And there on the waterfront stands a commemorative stone to mark the 100th anniversary of Ho Chi Minh’s arrival in Britain in 2013.
The monument was unveiled by the Vietnamese ambassador, Vu Quang Minh, who also presented the town with a three-foot bronze statue of Ho Chi Minh that can now be seen in the Newhaven Museum.
Newhaven’s other claim to fame is that it is the birthplace of ‘Wreckless Eric’, best known for his 1977 hit Whole Wide World. His real name is Eric Goulden and he’s still going strong on the punk rock circuit.
Another musician was immortalised on a Newhaven bench last year. The memorial bench, not far from the Ho Chi Minh monument, is dedicated to Eazy-E, the ‘Godfather of Gangsta Rap’ who died of HIV/AIDS in 1995. The American rapper, whose full name was Eric Wright, was a former drug dealer who rose to international fame with the NWA group in the late 1980s. Despite no apparent connection with the town, a crowd-funded appeal launched by a hip-hop fan raised most of the money to pay for the bench and the rest was topped up by donations from two Brighton HIV charities, the Sussex Beacon and the Terrence Higgins Trust.
Ho Chi Minh is Newhaven’s most famous visitor. But there have been others, such as the exiled French king Louis Philippe, who landed at Newhaven after he was overthrown in 1848; and Lord Lucan, who apparently murdered his nanny in mistake for his estranged wife in November 1974. His car was found abandoned in the town soon afterwards and Lucan has never been seen again.

Posted by london communists at 1:31 AM