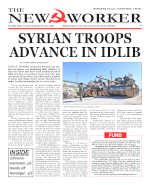 Boris Johnson usually likes being in the public gaze. During the election he would strut around a hospital in a lab coat pretending to show some concern at the plight of the health service or pose in farmer’s togs in an attempt to get the rural Tory vote out in December.
Like the Roman Emperor Nero, Johnson is constantly searching for vanity projects that will immortalise his name.
When he was Mayor of London we had the “Garden Bridge” that was eventually scrapped but only after £43 million of public money had been poured down the drain. We had the even more ludicrous “Boris Island” on Shivering Sands in Kent that was going to be the site of London’s fourth airport but fortunately never got off the ground. Now he’s in Downing Street Johnson is talking about building a 20-mile long “Boris Bridge” between Scotland and northern Ireland which, once again, was spotlighted in the Tory media.
Boris loves the limelight but he runs for cover when the going gets tough and during the recent floods that have devastated large tracts of the country he is nowhere to be seen.
Jeremy Corbyn, the Labour leader, denounced Johnson this week for not having visited any communities affected by floods, accusing him in parliament of being “a part-time prime minister” who spent all of last week’s parliamentary recess hiding in Chevening, a government mansion in the Kent countryside.
“Where is he? He’s the Scarlet Pimpernel – you can never find him in an emergency” said Alexandra Davies-Jones, the Welsh Labour MP for Pontypridd that was hit badly by the flooding. She said: “Why hasn’t Cobra been convened? This is a massive national emergency in my book. Parts of Wales have been hit that have never been hit before – that’s what’s so shocking about this. We need to understand why this has happened. The UK government needs to wake up and realise serious things are happening here in terms of climate change and our planet and it needs to address them now”.
“When I visited Pontypridd last week,” Corbyn said, “I saw at first hand the damage and destruction that the floods have caused to people’s lives, homes and businesses, but the Prime Minister was silent, sulking in his grace-and-favour mansion in Chevening…when is he going to stop hiding and show people that he actually cares, or is he too busy going about some other business?”
Labour said it was “a disgrace” that the Johnson government was resisting calls to convene the Cobra emergencies committee while council leaders in flood-stricken areas said the government’s refusal to call Cobra had obstructed the response in some towns and delayed the release of vital funds  needed to help restore normal life to the devastated areas.
Now Johnson does nothing to quell public concern that the spread of coronavirus in Europe could lead to an uncontrollable epidemic in Britain in the very near future. Fifteen people have already tested positive for coronavirus in the UK though thankfully eight of them have recovered and been discharged from hospital.
Labour has branded the government’s response to the coronavirus outbreak “shambolic” after it emerged that Boris Johnson’s father had passed on a message from the Chinese ambassador expressing concern that the prime minister had not yet been in touch with Beijing about the crisis. Shadow foreign secretary Emily Thornberry said this showed that the prime minister was “lazy, inept and reckless”.
That he certainly is.
Posted by london communists at 7:43 AM