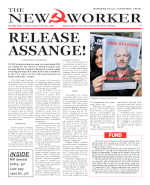 The Prime Minister’s ministerial purge that led to the resignation of the Chancellor, Sajid Javid, and the appointment of a special adviser that was speedily withdrawn following cross-party protests over his crackpot racist views, demonstrate the inherent instability of the Johnson administration.
The Tory Daily Mail tells us that “half the Cabinet” feel unable to work with Dominic Cummings, the aide who pulls the strings behind the throne of the Johnson government, who many believe isn’t even a paid-up member of the Conservative Party. It doesn’t augur well for the future of the current Tory leader, despite the sweeping victory at the December general election that ended Tory dependence on the votes of the sectarian bigots in northern Ireland.
But Johnson has little to fear in the short term. His Tory Europhile rivals were kicked out of the party in September whilst Labour politicians, who should be exploiting the disarray in the Tory ranks, are instead falling over themselves to distance themselves from Corbynism and pledge their loyalty to Zionism in the Labour leadership contest now taking place.
Although Brexit seems done and dusted, future trading relations with the European Union (EU) have still to be thrashed out with Brussels. A substantial section of the ruling class is still opposed to leaving the EU and although they have clearly lost their grip on the Tory Party, they still can count on the Liberal Democrats, Scottish nationalists and most of the Parliamentary Labour Party to argue their case.
They will look to Sir Keir Starmer, the front-runner in the Labour leadership race who is the unrepentant architect of Labour’s volte face over Brexit that cost them the election, and Sadiq Khan, the Mayor of London, to continue to promote the alleged benefits of EU membership.
Last week Sadiq Khan called on Brussels to offer free movement for Britons through “associate citizenship”, as the “next best thing” to membership. Khan said that re-joining the EU was not foreseeable in the “short to medium term” but associate citizenship of the bloc could be one way to “make the best of Brexit”. Although “associate membership” may be theoretically feasible within current EU rules, it clearly is incompatible with British law as it stands at the moment. But Khan’s motive, like Starmer’s justification for Labour’s Brexit U-turn, is simply to keep the issue on the political agenda.

US imperialism’s position in the Middle East is collapsing like a house of cards following the Syrian army’s sweeping victories over the sectarian terror gangs in the Turkish occupied Idlib enclave and the collapse of the so-called “deal of the century”, that the Americans supposed could resolve the Palestine issue by giving the Zionists everything they want.
Trump’s ‘deal’ leaves Arab Jerusalem and large swathes of occupied Palestinian West Bank territory under Israeli occupation in exchange for some worthless bits of desert along the frontier with Egypt that the USA claims could be developed into industrial zones. The Palestinians get nothing apart from a puppet state, much like those set up by the Nazis in German-occupied Europe, that would be totally dependent on Israel and financial support that the Americans expect the feudal Arab oil princes to provide.
Communists call for the immediate and unconditional end to the Israeli blockade of the Gaza Strip and for a comprehensive peace treaty, based on past United Nations resolutions, to end the Middle East conflict.
United Nations resolutions provided the basis for a just and lasting peace in the Middle East. First of all, Israel must withdraw totally from all the occupied territories seized in 1967, including Arab East Jerusalem and Syria’s Golan Heights. The Palestinians must be allowed to establish a state of their own on the West Bank and Gaza Strip. The Palestinian refugees whose homes are now in Israel must be allowed to return or, if they so wish, be paid appropriate compensation in exchange. All states in the region, including Israel, should have internationally agreed and recognised frontiers guaranteed by all the Great Powers.
Posted by london communists at 4:44 AM