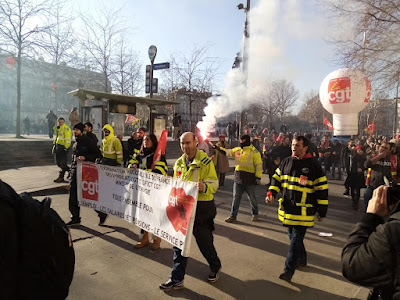 On 6th February in Paris I joined a national day of protest, the latest stage in the two-month long battle between president Macron and the unions over pension reforms. That week a parliamentary committee began considering the draft law, which faces 22,000 amendments.
At Place de la République and Place de la Nation the atmosphere was infectious, with singing, groups of musicians, vans playing everything from old workers’ songs to high-energy French rap, and drummers keeping a tradition dating back to the 1789 revolution.
Travelling on ahead of the march, close to Place de la Nation, I was passed by 60–70 motorbikes, each carrying two cops, many not in uniform – not the kind you’d stop to ask for directions.
There was a huge police presence at Nation and I was redirected by cops at one of the blocked off entrances to the square.
A comrade from the Pole de Renaissance Communiste explained that these motorbike police were from a new crack unit.
He said the Envoye Special current affairs broadcast the evening before the protest on the France 2 channel revealed that in recent weeks a task force of motorcycle policemen had been created.
"There are two policemen on each bike: a driver and a cop with weapons, telescopic truncheon and stun grenades.
"They usually get to a manif (protest) with 20 bikes and 40 cops, and then seriously injure as many people as they can. Then they quickly escape to do the same dirty job somewhere else.
"They are called the BRAVE M (Brigade de Répression a la Violence – Motocycliste).
"In France, cops must wear a number, so one is supposed to be able to complain if necessary. But the ones from ‘BRAVE M’ have no numbers and wear masks to cover their faces. Slowly and slowly, fascism is growing in France…­­"
The media on both sides of the English Channel are vying with each other to declare the unions are about to give up the fight, with photos in Friday's Paris newspapers showing low-level shots of handfuls of protesters.
But the infectious energy and enthusiasm of the Paris march – just one of many across France – suggests the battle is far from over and that the unions enjoy the support of a sizeable majority of French people in the fight to protect pension rights.
Workers from local councils, health, refuse, transport and others were joined by large numbers of enthusiastic students and young people, whilst dozens of union banners joined home-made ones and, of course, red flags.
The previous week saw doctors and lawyers joining the strike, and a pitched battle between firefighters, wearing their uniforms and helmets, and the police close to Place de la République.
Since the start of the Gilet Jaunes protests in December 2018, according to the Ministry of the Interior some 3,100 people have been injured – 1,900 civilians and 1,200 police.
An internet search suggests that 82 people have been seriously injured – 17 have lost an eye, and four a hand or finger. Amnesty International has condemned “the massive use of tear gas, the use of trap techniques, and the use of GLI-F4 explosive grenades, de-encirclement grenades and LBD40 rubber bullet launchers”.
The LBD40 ‘flash balls’ weighing 95 grams are believed to have caused many serious injuries. Last month a volunteer firefighter in Bordeaux was hit on the temple at a Yellow Vest protest and is still in a coma, and the rubber bullets caused two deaths before 2019.
Not only peaceful protestors but also innocent bystanders, journalists and human rights observers have been victims of the extremely dangerous police tactics.
The protests are supported by four of the France’s largest unions – the CGT, Force Ouvrière, FSU and Solidaires – but two more moderate unions, the CFDT and Unsa, dropped out last month after Macron made miniscule changes to the so-called ‘pivot age’ the proposed reforms would take effect.
Self-employed private sector workers including lawyers, airline pilots, doctors and other health professionals have also backed the pension protests with mass protests since September 2019. Many lawyers have been on strike for three weeks, forcing courts and tribunals to postpone hearings.
The involvement of self-employed workers means the government is facing a two-pronged assault against the pension reforms.
Lawyer Jean-Philippe Labes said: “This is a profession that is getting poorer,” and another lawyer from Paris, François Suberbere, said: “Our pensions are threatened. We are being told we have to pay more charges for fewer pension rights. This means many smaller firms that are vital to the legal system will not survive.”
Last Tuesday more than 300 senior hospital doctors partially ‘resigned’ from their jobs across France to denounce the state of the hospital sector and put pressure on the government to respond.
Whilst unions have taken industrial action and protested against the pension changes because they will lose existing rights and privileges, independent workers object to their autonomous pension schemes, which are in credit, being merged with other schemes that are in debt and a rise in their pension contributions.
Meanwhile, strikes at incineration centres are causing rubbish to pile up in the streets of Paris.
The Louvre, the Paris Opera and even ballet dancers have previously joined the strike, and the Paris Opera orchestra has given free performances to protestors.

Posted by london communists at 8:35 AM