For a planned economy 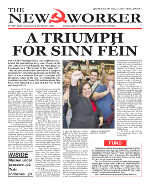 Today (Friday) sees the UK Student Climate Network hold another ‘Global Strike 4 Climate’.  Last September they organised 300,000 mostly young people of school age who took to the streets in 850 separate protests. Obviously saving the planet is more important during a double maths period than during the school holidays when some, at least, of the protesters take to the skies in polluting aeroplanes.
These protests have done much to raise the issue of climate change and have helped to ensure that every politician pays at least lip service to the matter.
The devil is in the detail however. On Tuesday the Tory Government announced that it was going ahead with the much-delayed High Speed railway (HS2).
This announcement received a mixed reception. The three main British railway unions have been extremely vocal in advocating HS2 on the grounds that railways are the most environmentally friendly form of transport. And so they are – but only up to a point.
When railways first appeared, it was predicted that steam engines would burn the countryside to a cinder and would spell the end of horses. Neither outcome happened and in fact horse traffic increased dramatically as more people and goods needed transport to and from railway stations.
In a country with an existing extensive, if creaking, railway system, it is not reactionary to query whether it is absolutely necessary to spend squillions to cut 10 minutes off existing journeys. Whilst transport union RMT welcomed an end to dithering and Unite welcomed it for construction jobs it would bring, others were not so pleased. These range from Greenpeace, concerned about the inevitable destruction arising from the construction of new lines, and those who say it would be excellent if it came to their town but not so close it would see their house being knocked down.
In 1976, when workers at the Lucas Aerospace plants were facing redundancy, they came up with plans to convert their factories from arms production to more socially useful production. They developed detailed production and marketing plans that were not pie in the sky theories, and they produced six volumes of 200 pages each that covered 50 potential products. In the end all this came to nothing because nobody in the Labour Cabinet, apart from Anthony Wedgewood Benn, as he was then known, supported it. After all, we can’t have workers thinking for themselves. The net effect was that some jobs were saved. The 40th anniversary celebrations of those events were supposed to herald a renaissance in such thinking but they seemed to have withered on the vine. These setbacks are no excuse for despair or inaction.
These matters are too important to be left to the greenies, who too often live a fantasy world that is fine for the rich who can afford it. Working-class people need energy- and steel-consuming washing machines in their homes as they cannot afford servants to do it by hand in an organic manner. Nostalgic calls to bring back municipal laundries are unlikely to be a vote winner. Actively promoting recycling industries in Britain would provide much needed jobs for those not over-burdened with paper qualifications.
Workers can rightly be somewhat cynical about a potential green bonanza, hopes about a thriving windmill industry have come to naught, but it is worse harking back to a lost golden age of mines and cotton mills. Such views are rare but not extinct in the trade union and labour movement.
The great strides made by the People’s Republic of China, both in overcoming centuries of poverty and in reducing its carbon footprint in a period of rapid economic growth, offer hope of combining economic growth with greenery. As the Chinese themselves admit, theirs is not necessarily a model to be followed in all details. They are still heavily dependent on coal to the extent that they are the world’s biggest polluters (often for our benefit given that their exports keep us in mobile phones).
Even the World Bank, no friend of even the mildest intervention of the so-called free markets, says that China is on the right track in de-carbonisation, which will be a priority of its forthcoming Five-Year Plan, so a planned economy seems to be not too bad after all.
Posted by london communists at 9:03 AM