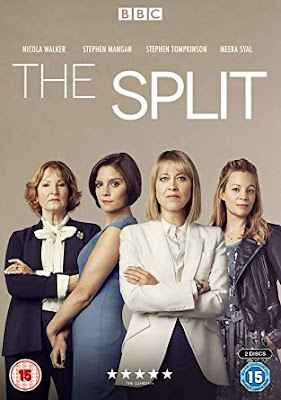 The BBC has a tendency to create dramas about people whose lives are a totally dethatched from the rest of the population. Recent examples are Gold Digger, which this column reviewed last year and to a limited extent the comedy Motherland; although this drama may have been redeemed with the inclusion of the working-class character Liz played by Philomena Clunk.
These dramas are exclusively based in London and feature the sort of entitled malcontents you get on Peoples Vote Marches. My heart bleads for them when you hear about them having to wait longer in the passport queue when they visit their Tuscan villas.
A recent example is the legal drama, The Split, now in its second series. It centres on the Defoe family who own a law firm specialising in high class divorce cases. The main character Hannah Stern, played by Nicola Walker, is involved in an affair with a male colleague.  Meanwhile her husband Nathan, a barrister is about to have an affair with his new pupil.
Female celebrity Fi Hansen, played by Donna Air, who bares an uncomfortable resemblance to the recently deceased television presenter Caroline Flack, is the plaintiff in a divorce. Hansen is almost certainly the victim of coercive control from her husband. Ironically Flack may have been guilty of coercive control herself if police reports are to be believed.
The drama features Hannah’s sisters; one of whom is having difficulties conceiving while the other has a shoplifting and alcohol problem which, at least shows that theft is not the preserve of those who cannot afford to buy the stolen items.
The emphasis on female characters gives the drama a liberal feminist edge – another piece of equipment in the elite metropolitan tool-kit. This simply means well-heeled women getting into the board room at the expense of everyone else – men and women included. Less well-off women can assist in this crusade by working as child minders and cleaners.
You would be excused for simply saying who cares? On the other hand, the drama gives an insight into the liberal-metropolitan elite. This highly pretentious group is a product of a highly imbalanced economy where wealth is sucked into London at the expense of the rest of the country. These people fear any form of disruption to their comfortable lifestyles resulting from leaving the European Union and suffer from a disconnect with anywhere outside of the M25.  Their fake internationalism is nothing more than a contempt for the majority of their own population; as well as justification for hiring low-paid au pairs and builders.
The recent tragedy of British politics was when the fake left sided with this group against the working class. The Tories played their hand with promises of a more balanced economy and, of course, honouring the 2016 referendum. Most of the Tories promises will come to little more than hot air. But it would be nice to see television series feature ordinary folk who don’t live in London once in a while.
Posted by london communists at 5:28 AM