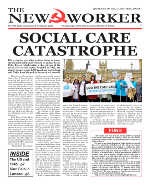 ELSEWHERE in the paper there is a report of a recent meeting at the House of Commons on the situation in Kashmir. This concludes with the words “there is no ongoing campaign of solidarity in Britain with the people of Kashmir”.
That statement is not only true in the specific Kashmir case but the gives us cause to reflect on the state of international solidarity work in Britain, which could, quite frankly, be better.
International solidarity basically take two forms. One is supporting progressive governments against imperialist aggression, as is the role of organisations such as the Cuba Solidarity Campaign and the Korea Friendship Association. In other cases it is to support oppressed peoples from foreign occupiers, such as the work carried out by the Palestine Solidarity Campaign or the NCP’s support of left forces in Ukraine.
On occasion the distinction can be blurred, as with the present situation in Bolivia, or in the past when supporting the Nicaraguan government became problematic in the eyes of many when strict abortion laws were imposed. The reverse process took place when opponents of Apartheid in South Africa became keen supporters of the ANC government, sometimes on occasion becoming cheerleaders at a time when a few friendly, but not preachy, critical remarks would have been more helpful.
Needless to say, imperialist powers are quick to discover any real or alleged ill-treatment of minority groups that can be exploited for their own ends. Amnesty International and the Minority Rights Group, in particular, are past masters at this dirty game.
Liberation, the former Movement for Colonial Freedom, if not formally defunct is near enough so to make no difference, so there is clearly a ‘gap in the market’, particularly for when urgent situations flare up across the globe. Perhaps a Latin America Solidarity Campaign would be more useful than separate organisations for Cuba, Venezuela and Bolivia, to say nothing of Chile, Peru and Argentina.
Sometimes great care needs to be taken with just who precisely is worthy of support even where evidence of clear cut need for action. This Editorial comes from the pen of someone who recalls two exiled warring Tamil factions loudly insisting that they were the sole legitimate representative of all Tamils in Britain and at home whilst claiming that the rival group were simply gangsters. On another occasion a Turkish trade union group received support from well-meaning internationalists before it slowly dawned on them that the trade union was associated with the Turkish fascist party. Sometimes ascertaining the differences between the Judean Popular Front and the Popular Front for the Liberation of Judea is no joke. There is a fine balance between being too fastidious and backing the completely wrong horse.
The British labour movement and working class has a distinctly mixed record. Sometimes this can be understandable, as when impoverished workers in the early 19th century did not take too kindly to being told that slavery was evil by pious evangelicals who made their disdain for the aims of factory workers clear. The high spot was perhaps British working-class support for the republicans in the Spanish Civil War — but even that can be romanticised because many workers, including those who had first-hand experience of imperialist oppression, followed the lead of the pulpit and willingly gave their pennies to support the fascists.
International work can of course be controversial, not all causes are as instantly cuddly within the labour movement as that of Cuba, which is an agreeable sunny climate ideal for producing Havana Club rum.

Wikileaks once exposed a conversation held in 2006 when a senior figure at the TUC assured a representative of the US Embassy that the forthcoming TUC Congress would likely support a resolution opposing US sanctions on Cuba, but that there was absolutely nothing to worry about because this was a traditional “warhorse issue” that kept activists harmlessly occupied. If many more were involved worthy motions would have more effect, and the bureaucrats at the TUC and Donald Trump would have more to worry about.
The patient work of getting motions passed at trade union branches and then on to annual conferences and finally the Trades Union Congress, or gathering signatures outside a supermarket on a wet Saturday morning, is not glamorous, but it needs to be done more urgently than ever.
Posted by london communists at 5:33 AM