If it really did happen here 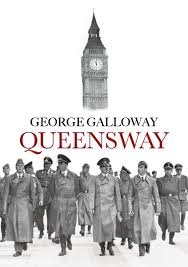 A group of high-ranking Nazis and their female consorts are killed in a bomb explosion whilst listening to a band. Good stuff to us progressive folk; however, this is not occupied Europe but Britain in 1940. France has fallen. The Dunkirk evacuation has failed, leading to a successful German invasion. The Fascist leader Oswald Mosley is Prime Minister. Edward VIII is King once again and Churchill has gone into hiding. This is the story of those who resisted – or would have resisted in George Galloway’s alternative history.
My first impression was how small the book was. Consisting of only 120 pages it looked more like a pamphlet – however, I was always told not to judge a book by its cover and that size isn’t everything.
George Galloway, the maverick MP kicked out of the Labour Party for opposing the imperialist invasion of Iraq who then returned to Parliament under his own Respect platform, has written several books over the years. They have all reflected his political views. This time, he’s turned his hand to fiction.
Galloway is not the first author to write a novel based on a German victory in the Second World War.  Others include The Man in the High Castle by science fiction writer Philip K Dick, which is set in a world run by Hitler and Hirohito with German and Japanese puppet governments controlling what was once the USA. Robert Harris’s Fatherland begins with the mysterious death of a senior official in a victorious Nazi Germany of the 1960s. The ‘alternative world’ of SS-GB by Len Deighton is a British Vichy-type regime under German occupation, which was successfully dramatised by the BBC a few years ago. Finally, CJ Sansome’s Dominion is based around US-supported resistance to Hitler and a defeated USSR.
In Queensway the USSR is still alive and kicking because the Non-Aggression Pact with Germany is still in place. Most of us know, although obviously not the Cold War reactionary Len Deighton, that this was only a temporary measure.
What of the resistance in Queensway? A cross-class alliance called the National Directorate, consisting of High Tories and Labourites. It is, however, an armed group known as the ‘Harry Pollitt Brigade’ that carries out the attack in the opening pages of the novel. To provide an element of suspense there is a search for an elusive nuclear physicist called, surprise, surprise – Klaus Fuchs. On that note, if you want to read a book where the left are the heroes it is a must read. At the same time, the author uses humour to highlight the class differences within the resistance movement. Winston Churchill, hiding down a mineshaft, is severely reprimanded by a Welsh miner about the dangers of smoking underground, methane pockets and all that Health and Safety stuff.
Queensway, named after the Headquarters of the German operation in Britain, is intended to be Book I of Galloway’s Darkest Hour project, which may explain the book’s relatively small size. It may be part of Galloway’s attempt to show that it is possible to be both left-wing and patriotic, which is the basis of his latest project – the “red, white and blue” Workers Party of Britain initiative. But whatever you may think of Galloway’s new political platform, his book Queensway is well worth reading.
Posted by london communists at 10:54 AM