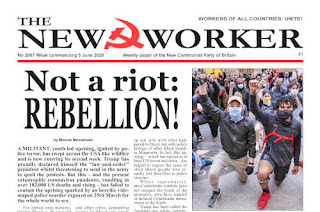 The brutal murder of George Floyd by the Minneapolis cops has triggered angry protests from coast to coast in the USA. This is the United States that the British ruling class call the leader of the ‘free world”. This is the society that they worship as the model of neo-con or ‘libertarian’ capitalism.
James Truslow Adams, an investment banker turned writer, coined the term ‘The American Dream’ in his 1931 bestseller, the Epic of America. This was a “dream of a better, richer and happier life for all our citizens of every rank”, which he said “has been realised more fully in actual life here than anywhere else, though very imperfectly even among ourselves”.
Last week millions upon millions saw the footage of an unarmed Black man being choked to death by a cop in broad daylight. That brutal scene has now gone around the world, exposing the real face of the ‘American dream’ in the 21st century.
The US President now threatens to send in the troops to quell the protests, which he says are led by “radical-left” and anti-fascist “anarchists”. Trump claims that the media “is doing everything within their power to foment hatred and anarchy”. He clearly wants to make political capital out of the crisis, which he hopes will divert attention from his inept handling of the COVID-19 crisis and mobilise racist opinion behind his re-election campaign.
We can do little or nothing to influence events in the USA, but we must show solidarity with the workers and the ethnic minorities who are now taking the struggle against oppression on to the streets of towns and cities across America.

Meanwhile ‘Britain’s Trump’ is struggling to recover lost ground after a disastrous week following the Cummings scandal, which has led to a slump in Tory support in the opinion polls. Although Boris Johnson has managed to “move on” from the Cummings affair with his chief aide still in place, the credibility of his government has been clearly undermined, not least amongst his own supporters.
The Prime Minister knows that the furore over Dominic Cummings’s lockdown-breaking trip to Durham is only the beginning. What he doesn’t know is what comes next. The cabal of dissident Tory grandees kicked out of their party for opposing Brexit last year are still around. Now that Corbyn’s gone, there is nothing to fear from a future Labour government. With Sir Keir Starmer at the helm they can count on Labour support for any future Remainer moves to derail Britain’s exit from the European Union (EU).
The ludicrous fixed-term parliament rule makes it almost impossible for the opposition to force a snap election through in parliament. But there may still be the numbers to get a further extension of the UK’s transition period out of the EU beyond the end of this year.
They argue that the economy, crippled by the lock-down regime, needs to maintain existing trade agreements with Britain’s EU partners for a considerable period of time. They will argue, with some justification, that Boris’s plan, based on a one-sided agreement with the US imperialism, looks even more unattractive given the current unrest on the other side of the Atlantic.
The Remainers’ first step is to derail the Brexit time-table. If that works, the way is clear to prolonging the transition period to the next general election at end of the fixed-term in 2024 whilst creating the climate for the “second referendum” and the “national unity government” that Starmer thinks he’s well qualified to lead.
All this shows that we must continue the Brexit campaign until Britain does actually leave. It still hasn’t happened, nor will it ever with the likes of Starmer in charge.
Posted by london communists at 1:56 AM