The dark side of Seoul 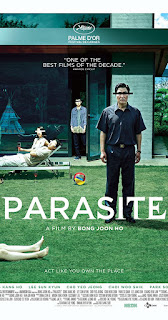 This was a film I intended to see before all the cinemas closed. Sadly this columnist does not get invited to premiers and award ceremonies; although I have always argued that I should and have even purchased a tuxedo just in case. However, it is now available online and on DVD.
Directed by Bong Joon Ho, this black comedy from south Korea won the Palme d’Or when it was premiered at the Cannes Film Festival in May 2019. It then went on to win four Oscars in Hollywood later in the year.
The plot centres around the contrasting lives of two south Korean families; the wealthy Parks and the working class Kims. The Kims live in a semi-submerged slum and earn a living folding pizza boxes whilst Nathan Park is a wealthy businessman with an alcoholic wife and two dysfunctional children who is able to employ an array of servants.  Through their ingenuity the Kim family find a way into the world of the Parks.  Initially the two Kim children find employment as tutors for the younger Parks and soon obtain work for their parents as a chauffeur and housekeeper.  Initially all seems to go according to plan but eventually their scheme comes tragically unstuck.
The film provides a limited but still necessary critique of south Korean society. Basically, it’s not what it’s cracked up to be.  If you have been watching the Daily Coronavirus Bulletin, or ‘Hancock’s Half Hour’, as it is starting to be called you may have heard how well south Korea has dealt with the pandemic. So far it has a death toll of 272 with 11,541 cases (source: Worldmeter). Although this is a bit of a hard act to follow its northern neighbour, the Democratic People’s Republic of Korea, has reported a death toll of zero.  Just shows the dangers of being so isolated!
The title of the film begs the question who is the parasite? Is it the wretched Kims who worm their way into Park’s household by underhand methods or is it the worthless Parks themselves?
Parasite exposes a myriad of problems; not simply inequality but also indebtedness, poor quality housing, limited welfare provision and also that south Korea has one the highest rates of tuberculosis in the world.  Ironically in the opening scene we see the Kim children try to get the Wi-Fi to work in their hovel; this is in the country that is home to the technology giant Samsung.
It also touches on the limited legitimacy of the south Korean state, established after the Second World War, that has since then has acted as a cipher for its US imperial masters.  This is shown by the relative ease in which Ki Jung, the Kim’s daughter forges a university degree to enable her brother Kim Ki Woo to work as a tutor.  This might also explain how the position of the elite is somewhat temporal.  In a later scene we are informed that many wealthy south Korean families have large cellars beneath their houses in the event of a north Korean invasion or in the case their creditors call. What a place to live!

Posted by london communists at 4:44 AM