Playing with fire in the Himalayas… 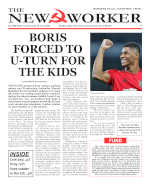 India is playing a dangerous game in the Himalayas. Indian attempts to encroach into Chinese territory were beaten back in a skirmish in which at least 20 Indian troops were killed and 120 more wounded this week.
In the past India followed the path of independence and established friendly relations with the Soviet Union and the people’s democracies in Asia and eastern Europe. Leaders such as Pandit Nehru and Indira Gandhi were pillars of the non-aligned movement. Now it’s led by Narendra Modi, the leader of the BJP, a front led by the secret Hindu nationalist RSS militia, a fascist bloc of high-castes, landlords and industrialists.
The BJP leaders replaced India's traditional policy with one of support for Israel and partnership with US imperialism. Some of them even talk of joining NATO now.
The Modi government claims it wants to make India “self-sufficient”. Modi says a self-sufficient India would be fully integrated with the world economy whilst not dependent on anyone in strategic areas. In practice, all this means is privatising the country’s natural resources for the benefit of foreign and Indian big business.
The Indian government has proved totally incapable of dealing with the COVID-19 pandemic that is sweeping across the sub-continent. The mostly privatised health service cannot cope and at least an additional 150 million people have been rendered unemployed during the lockdown period.
The needs of millions upon millions of Indians who live in abject poverty are ignored by the government that seeks to establish authoritarian rule throughout the country.
Despite being the country's largest religious minority, India's Muslims are frequently subjected to violent attacks by Hindu fanatics, like the riots in Delhi last February that forced many Muslims to flee the capital in terror.
India’s corrupt ruling class hopes to divert the masses down the barren road of sectarian violence whilst they dream of riches to come by squandering billions on weapons in a drive to become America’s chief enforcer in the region.
The hidden hand of US imperialism clearly lies behind the latest Indian provocation in the Galwan Valley, like it did when it covertly backed Indian support for the Dalai Lama’s futile revolt in Tibet in 1959 and the border war of 1962. On both occasions the Americans did nothing and the Indians got a bloody nose. Let’s hope wiser counsel prevails in Delhi this time round.

…and on the Korean peninsula

Democratic Korea dramatically countered recent south Korean provocations by blowing up the empty north–south liaison office in the border town of Kaesong this week. This dramatic piece of street art was clearly intended to send a message to the Seoul regime that has resorted to old Cold War tricks along the de-militarised zone that divides the Korean peninsula.
Helium balloons carrying anti-communist propaganda leaflets have regularly been launched into the DPR Korea by what the puppet regime calls “defectors”. But everyone knows that these people, more accurately called “riff-raff” and “human scum” by the north, are agents of south Korean intelligence, which itself is but an arm of the CIA.
During the height of the Cold War the Americans and their local lackeys used balloons to drop dollars and propaganda across the armistice line drawn up at the end of the Korean war in 1953. Donald Trump’s summits with Kim Jong Un raised hopes of a new page in inter-Korean relations. But despite the fine words, the Americans have done nothing apart from stepping up their blockade of the DPRK.
Posted by london communists at 11:00 AM